My name is André Dias and I am a PhD student in Portugal. I work in a wonderful institute called Instituto Gulbenkian de Ciência, under the supervision of Moisés Mallo. I started my PhD at the beginning of 2017 and since then it has been a fantastic journey…

In 1925, after looking to the formation of the chick embryo, Holmdahl proposed that the development of the vertebrate body axis is accomplished by two separate and distinct processes, termed primary and secondary body formation1. In our lab, considering the differently regionalized vertebrate body structures: head, neck, trunk and tail, we are expanding his vision, trying to understand the molecular mechanisms that regulate the formation of these different and somewhat independent building blocks.

At the end of gastrulation, after the anlage for the most anterior part of the head is formed, the embryo starts elongating along its main body axis, as new tissue starts to be continuously generated in the caudal part of the embryo. Thus, the remaining structures of the body arise in anterior (rostral) to posterior (caudal) direction; finishing the head, making the neck, then the trunk and finally the tail. This process of axial elongation depends on groups of cells located in the caudal part of the embryo that are known to have stem cell-like properties. The Neural-Mesodermal Progenitors (NMPs) are a very important and specific subset of these cells, which seem to have the potential to generate both neural and mesodermal tissues.

Professor Valerie Wilson and her lab members at the MRC Centre for Regenerative Medicine in Edinburgh have been studying the process of axial elongation in the mouse embryo for several years. They belong to the selected group of researchers who have pioneered the characterization of the different cell populations involved in body axis formation, as well as mapping their location within the embryo2.

During the 18th International Congress of Developmental Biology in Singapore, I met Filip Wymeersch – who was then a Post-Doc in Val’s lab. Talking to him about these special cells that make up our bodies, we considered collaborating in the future by joining the expertise of both labs. An idea was put to paper, an experiment was designed… but, as a lot of things in science, we would need funding to be able to accomplish it. So, I applied to a Travelling Fellowship from “The Company of Biologists” (COB) and surprise, surprise… I got it!!

Thanks to the COB (and to the journal Development) I had one of those life/career-changing moments with the opportunity of staying in Val Wilson’s lab in Edinburgh for three weeks. During my stay, we put our ideas into practice and conducted several experiments involving single cell analyses that will help us understand the molecular mechanisms regulating, specifically, the formation of the vertebrate head and neck. And now that I’m able to locate these special cells in the embryo, both in time and space, as well as micro-dissect them, I’ll continue this work using embryos with specific genetic backgrounds that we have available in our lab, in Portugal. 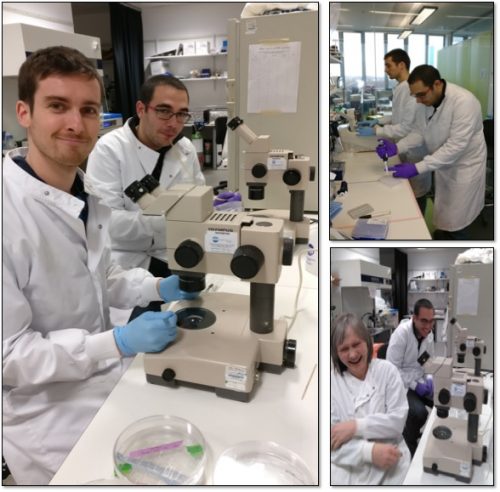 For me, this opportunity given by the COB was of great importance, since it definitely took my PhD into new, cutting-edge heights. I had the possibility to learn a variety of techniques, some of them even coming all the way from Rosa Beddington, as well as to discuss several questions regarding the formation of the vertebrate body and to nurture future collaborations. I also had the opportunity to present the results of my PhD project at the MRC Centre for Regenerative Medicine and get important feedback from their community. Finally, I still had time to taste a bit of Scotland, having the opportunity to climb Arthur’s seat and venture myself for one day into the Highlands :) .

To finish I would like to express my deep thanks to the COB for the financial support that allowed all this. Indeed, in times such as the ones we are facing now where walls are being built and people are told to look no further than themselves and forget the rest of the world, initiatives like the ones supported by The Company of Biologists are of great value: science still is universal, and we have a lot to give and to learn with each other. I also would like to thank Val for receiving me in her lab, for teaching me so many things, and for the discussions and suggestions regarding my PhD project. To Filip for the friendship, for trying to make my time in Edinburgh as good as it could have been, for showing me the techniques that they have implemented in the lab and for the scientific discussions that sometimes lasted well into the night. Also to the remaining colleagues in Val’s lab and to the MRC Centre for Regenerative Medicine community (specifically Julia and Anahi). Lastly, I would like to thank Moisés, my supervisor, for all the support throughout the entire process. Thank you!