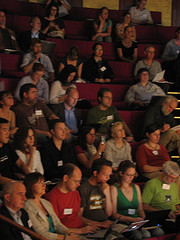 At the Node we welcome reports from scientific meetings, but only if the meeting organizers and speakers allow it. I’m currently writing the Node’s guidelines for meeting reports, and then realized I could fill an entire post with additional information and links. Unlike the guidelines, anything in this post is very general advice and not Node-specific.

First, find out if the meeting organizers have outlined a specific media or reporting policy. It varies a lot between meetings, and what is fine for one type of conference is absolutely not okay for another. For example, you are not allowed to report on any of the presentations at a Gordon Research Conference. They’re very explicit about this policy, and you should respect that. At the the other end of the spectrum is the Society for Neuroscience, who encouraged bloggers to write about their 2009 conference, and even selected a group of official “Neurobloggers”.
Most meetings will have a reporting policy in between these two extremes, and if they put their policy on their website, it usually tells you to ask for permission. CSHL updated their reporting policy in 2009 to include bloggers, and requires you to ask permission from the presenters before you write about them or their research. They also ask you to let them know whenever you intend to blog from or about one of their meetings. Keystone Symposia’s policy is very similar, and also asks you to ask permission from the speaker before blogging about their presentations.

What if there are no guidelines published? To avoid catching speakers and organizers by surprise, e-mail the meeting organizers to let them know you want to write about the meeting, and suggest that you will ask permission from each speaker individually before mentioning any scientific content. If the meeting organizer says that you’re not allowed to blog anything from the meeting, don’t do it. If they give you permission, save that correspondence in case you get into an unexpected conflict later. (This is why e-mail is better than asking in person!) The speakers’ e-mail addresses will usually be in the program booklet. Once you have decided that you liked a talk so much that you want to write about it, drop them a line. They might want to see your blog post before you upload it, or want to know where to find it.

If you haven’t asked for permission, or haven’t received it, you can still write a little bit about the meeting, but only as much as is already publicly available. This means that if a meeting organizer only publishes the name of the conference and the location, you can’t even mention the names of people who were there without their consent. If the entire program and all the poster abstracts are publicly available, you can include the names of speakers and the general topic of their talk or poster.

So why are conference organizers so strict about blogging? Aren’t the talks public knowledge now that the audience heard them? No!
The purpose of scientific conferences is not to tell the whole world about new research, but to update a group of other scientists about current projects. This means that a lot of unpublished data are shown; data that still need to be published in a journal. Most journals will not publish data that have previously been published elsewhere, and that includes results mentioned on a blog. To put it very bluntly: A blog post that contains unpublished data has the potential to ruin someone’s career.

A lot of journals do publish official meeting reports, but these are sent to the speakers before it’s published. When speakers see a draft of the meeting report that includes a little too much detail about their work, they ask the author to remove it. If you write about a talk on your blog, speakers have no such control over it. Organizers and speakers may still contact you after you publish the blog post, and ask for it to be removed. Please do so if they ask.

To summarize: if you want to blog about a meeting, make sure you have permission from the organizers and speakers, or only mention as much as is already publicly available.

(Photo by Eva Amsen. Taken at Science Online London 2009 – a conference that explicitly encouraged participants to blog about the talks.)

2 thoughts on “Tips for blogging from meetings”