Greetings and warm welcome to the “Planarian lab @ Oxford”

The lab is based in the Department of Zoology in The Tinbergen Building on South parks Road in the “Land of dreaming spires; Oxford”. Zoology Department in Oxford, has a rich heritage across the biological sciences, including association with three Nobel laureates (Peter Medawar, Niko Tinbergen and Sir John Gurdon). I am a first year DPhil student funded by a generous Clarendon Scholarship working in the lab of Aziz Aboobaker and my DPhil is focused on telomere dynamics and telomerase. We are using this as a way into understanding how many Planarians avoid the ageing process altogether. The lab has ongoing research spanning the areas of stem cell Biology, regeneration and ageing in highly regenerative organisms, like Planarians.

Planarians: A model to study regeneration

In the late 19th and early 20th centuries, biologists including Morgan, Child and many others were drawn to planarian due to their extraordinary capacities for regeneration. One characteristic of planarians, that defines my own research question, was noted by John Graham Dalyell in 1814 “they may almost be called immortal under the edge of knife”. Dalyell was referring to the fact that planarians can continuously regenerate any missing body parts. In 1898 T.H. Morgan reported that a piece 1/279th size of his original animal was sufficient to produce a complete animal. We can find many examples of animals throughout the phylogenetic tree with different capacities for regeneration, from whole body regeneration (Hydra and Planarians), to specific structures (limb regeneration in Axolotl, fins in Zebrafish) and of course organs, tissues or specialist, cells.

Planarians are bilaterally symmetrical, triploblastic, unsegmented and acoelomate platyhelminthes lacking circulatory, respiratory or skeletal structures and lab animals range in size from 0.5 -0.8 cm (Asexual biotypes) or 1-2 cm ( Sexual biotypes). There are species of land planarian that can be up to a metre long (like Bipallium). The epidermal layer in the ventral surface is ciliated which helps the worm to glide along a mucous trail.

Schmidtea mediterranea (Freshwater Planarian) has a stable diploid genome (8 x 108 bp) and exists in 2 strains. Sexual planarians are hermaphrodites which cross fertilize and asexual animals which have an unbalanced Robertsonian translocation between Chromosome I and III producing an unbalanced karyotype that would prempt successful meiosis. They undergo posterior fission behind the pharyngeal feeding organ and the fissionates regenerate missing structures including a new head to form an entire worm. It takes just 14 days to completely regenerate a whole animal and perfectly rescale all tissues and organs. 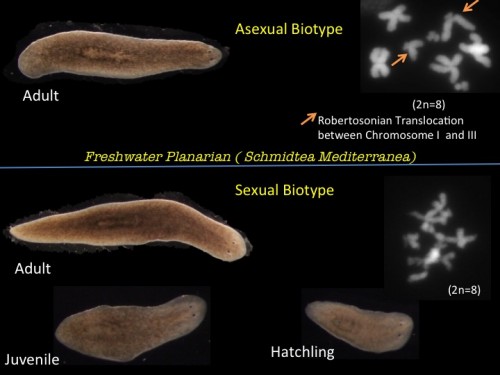 Fig 1.  Asexual and Sexual biotype of Schmidtea mediterranea ( Inset: Chromosome distribution of each strain showing a Robertsonian translocation between Chromosome I and III in Asexual strain) 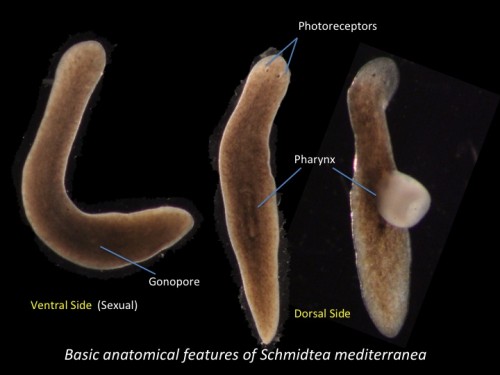 Sexuals (Hermaphrodites) cross-fertilize and lays black colored polyembryonic cocoons which are attached to the substratum with a stalk. Each cocoon can produce up to 20 hatchlings (which are not genetically identical), but in the lab we normally get around 5-6 hatchlings from each cocoon. Some planarian species alternate seasonally between sexual and asexual reproduction. In Dugesia ryukyuensis, sexuality can also be induced by feeding sexually matured planarians of another species (Bdellocephala) leading to the development of “acquired sexual worms”. 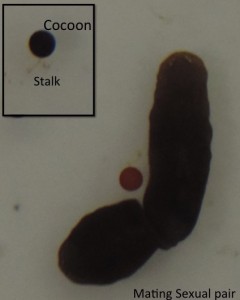 Fig 3. A mating Sexual pair of Schmidtea ( Inset: Black colored cocoon attached to the substratum with a stalk)

Regeneration in planarians is driven by a large population of proliferating pluripotent stem cells called neoblasts that collectively have an unlimited capacity to fuel regeneration. These neoblasts self-renew and differentiate in a highly coordinated manner to regenerate all the tissues and organs. Amongst the total population of stem cells it has been demonstrated that some are singularly capable of repopulating an entire worm after lethal doses of irradiation.

The lab is particularly interested in understanding how regeneration is controlled at the cellular and molecular level. We are also interested in how and why regenerative processes evolve or are lost over evolutionary time and the relationship of this to the evolution of different reproductive modes (Asexual vs Sexual). To this end we are using a broad comparative approach that encompasses a number of different planarian species.

The different species of planarians with which we work in Oxford include: Schmidtea mediterranea, Girardia tigrina, Dugesia japonica, Polycelis nigra and we have a growing resource of other planarian species with varied regenerative capacities, life histories and adult morphologies for comparative studies of regeneration. 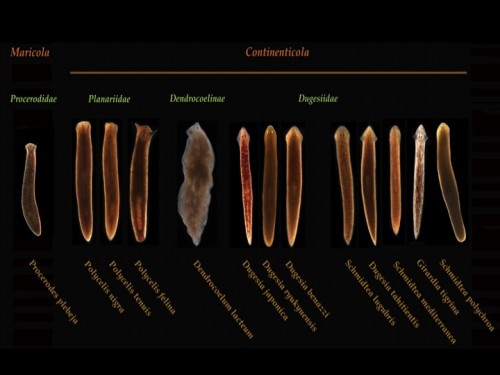 The genome of the sexual strain has been sequenced and the genome assembly and various transcriptomic resources are available online. With the recent development of cellular and molecular biology tools it is possible to inhibit gene expression in planarians using RNA interference (RNAi) by microinjecting or feeding bacterially expressed double stranded RNA (dsRNA). As neoblasts are the only proliferating somatic cells in these animals and can be specifically labelled with bromodeoxyuridine (BrDU) and can be sorted away from differentiated cell populations using FACS. Sensitive Whole-mount in situ hybridization (Fluorescent and Colorimetric) has been developed for detecting localization of gene expression patterns.

A typical day in our lab:

A typical lab day might start with preparing Planarian water (1X Montjuic Salt containing Nacl, Cacl2, MgSO4, MgCl2.6H2O, KCL and ddH2O with pH=7) and feeding the planarians raw organic calf liver ( our worm’s delicious food source) and changing the water after feeding ( twice a week). Planarians are kept in an incubator at 20°C. For experiments worms are starved for a week beforehand to standardise conditions as much as possible and to make sure no residual liver is hanging around.

The planarians glide with their ventral cilia and feed on the liver using the highly muscularised pharynx which protrudes in the presence of food. The tip is placed against the food which is sucked up into the gastrovascular cavity using pharyngeal muscles. Water hygiene must be maintained to keep worms healthy and protect them from any unwanted infection. We feed them twice a week to avoid diet induced stress and change our Planarian storage boxes twice a month to keep the worms clean. 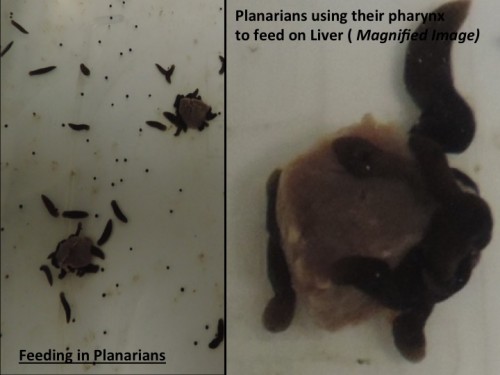 I collect hatchlings every month from my sexual animals and transfer the worms to a new box. Since I work on telomere maintainence mechanisms in the context of ageing (or lack of ageing), I need to keep an accurate record of their ages, so I know the age of all my worms. I started with just 100 sexuals and at the end of 5 months I have over 2500 Sexuals (with around 900 hatchlings arriving in just 2 weeks over last Christmas, clearly the worms were also in festive mood!).

A typical activity in the lab is to perform RNAi, either by feeding or injection. RNAi takes place over one or two weeks as we perform repeated rounds of injection or feeding. To knock down genes by RNAi in Schmidtea, many planarian labs worldwide are using the RNAi by feeding technique where we mix the dsRNA producing bacteria with the calf liver paste. Feeding based RNAi is less labor intensive and less time consuming than microinjecting in vitro synthesized dsRNA into worms and thus it is widely used. However our observations are that if you really want to know the role of a gene in detail you need to use the microinjection approach as well. 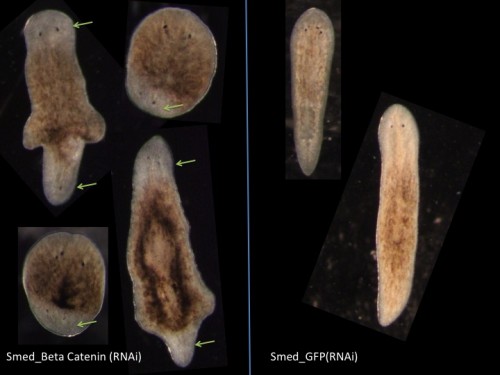 The most exciting part of the lab is everyone works on different aspects of stem cell and regenerative biology which span from ageing to cancer to epigenetics. In fact we are exploring all the planarians we have in our culture room and have even expanded our research to Macrostomum (a free living marine flatworm) and Parhyale (an Amphipod Crustacean also capable of regeneration). The lab organises field trips during the summer to collect and explore new planarian species while we share and talk about all our projects.

If anyone is interested to have a closer look at our work just visit our lab webpage: www.aboobakerlab.com