My name is Nikos. I just finished my PhD in the lab of Michalis Averof , starting my thesis at IMBB, in Crete and completing it at IGFL, in Lyon. My project aimed to introduce a new arthropod model to regeneration studies. Its main part was published recently (http://www.sciencemag.org/content/343/6172/788.abstract). In this Node post, I would like to present this new animal model and to summarize our findings in a more relaxed manner. I tend to read Node posts during experimental incubations; I hope I will be able to transmit my enthusiasm within this small break.

Parhyale hawaiensis (closely related to the common beach hoppers – Figure 1) has emerged lately as a promising model organism for comparative developmental studies. A wonderful post describing how life proceeds in a Parhyale lab was posted recently in The Node by Erin Jarvis. The concerted effort of a few labs across the world has lead to the development of several genetic tools in Parhyale. We are now able to create transgenic animals either by random insertion of a transgene or by site-specific integration, to overexpress or downregulate our genes of interest, to perform mosaic analysis, gene-trapping etc. Moreover, transcriptomic and genomic data are accessible in the form of EST, BAC and RNA-seq datasets for embryogenesis.

What really fascinated us, though, and triggered me to commence this study is the ability of crustaceans (including Parhyale) to regenerate. Parhyale regenerates all of its appendages – antennae, thoracic and abdominal appendages – within about a week of amputation. It is necessary to mention that Parhyale, like all crustaceans, go through successive molts where they shed their exoskeleton and replace it by a new one during their entire lifetime. The regenerated appendage, although it is formed within the old exoskeleton, is only revealed after molting. Using genetic markers expressed in different cell types, I showed that all major tissues are restored after regeneration. Nerves and epidermis regenerate first, muscles regenerate later. 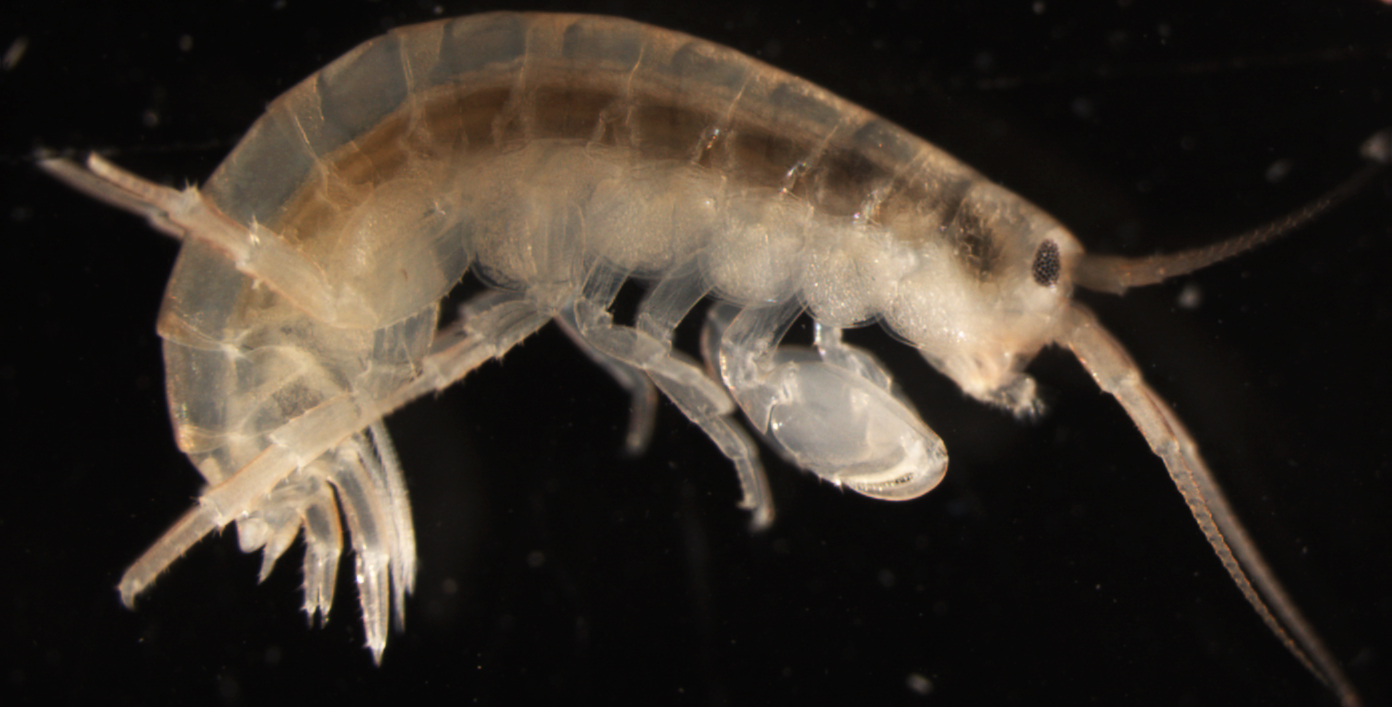 Figure 1: Parhyale hawaiensis possesses a number of diverse and specialized appendages, including antennae, feeding appendages, locomotory appendages, uropods and pleopods, all of which can regenerate upon amputation.

Regeneration is the process through which animals restore a body part after injury. Regeneration has incited human curiosity for a long time, e.g. there are well-known accounts of regeneration in Greek mythology; the Lernaean Hydra regenerated its heads, Prometheus regenerated his liver. Comprehending how different animals regenerate their body parts has been hindered by the fact that established animal models, like flies, mice and worms, have poor regenerative abilities.

Studying regeneration can facilitate our approach towards several stimulating questions. Several questions came to my mind at the beginning of my thesis. Why do some animals regenerate efficiently, whereas others do not? Do the animals that regenerate use common cellular and/or molecular mechanisms? Answers to these questions can help us construct the evolutionary history of regenerative capacity. Does regenerative capacity of different animals share a common origin or was it acquired during the evolution of different animal lineages?

Our first question was whether regeneration progenitors in Parhyale are totipotent or lineally restricted. In different animals, varying degrees of progenitor commitment have been described. Planarians employ totipotent cells, termed neoblasts, to regenerate every part of the body that is missing1. Vertebrates, on the other hand, utilize progenitors that retain their commitment to a specific lineage2,3. In specific circumstances, transdifferentiation (transformation of a differentiated cell type into a different differentiated cell type) has been reported to occur during regeneration, e.g. during lens regeneration in newts4.

I created mosaic animals, in which specific cell lineages were marked with a transgene carrying EGFP under the control of a Parhyale heat-shock promoter. I then assessed the contribution of these marked cell lineages to regenerated tissues. My mosaic animals carried the marker transgene in cell lineages that contribute to different portions of the ectoderm, mesoderm, endoderm or germline. After regeneration, I recorded which of the newly regenerated tissues expressed EGFP, which would indicate that it derived from the marked lineage.

I discovered that the regeneration progenitors in Parhyale have a regenerative potential that is restricted with respect to germ layers and, moreover, that they reside close to the regenerating tissue. For example, cell lineages that during embryonic development contribute to ectoderm on the left side of the body regenerate the epidermis and nerves on the limbs of the left side, cell lineages that contribute to mesoderm on the right side of the body could regenerate the muscles of the right side, and so on.

These results exclude the participation of totipotent progenitor cell in Parhyale limb regeneration, as is the case in planarians, and restrict possible transdifferentiation events to transdifferentiation between cells of the same germ layer; if transdifferentiation occurs, it does not cross the borders between ectoderm and mesoderm. My results indicate that, in terms of precursor plasticity, Parhyale resembles vertebrates in using lineally-restricted progenitors to create the new tissues.

The fact that totipotent cells have not been identified in vertebrates and crustaceans supports the argument that neoblasts are an evolutionary novelty of Platyhelminthes. On the other hand, totipotent stem cells that participate in regeneration have also been observed in some species of cnidarians5. So, the question remains: if the common ancestor of Metazoa could regenerate, would this be through totipotent or lineally restricted progenitors? It can only be answered by wider comparisons among the animals that have the capacity to regenerate.

In the second part of my project, I decided to look in greater detail within the ectodermal and mesodermal cell lineages that contribute to the regenerated tissues. I was lucky to have a transgenic reporter in the lab, PhMS-DsRed, that expresses DsRed in muscles6, as well as two cross-reactive antibodies that recognize members of the Pax3/7 family of transcription factors7. Using these tools, I discovered that Parhyale possess a mesodermal cell type that expresses Pax3/7 and is closely associated with muscle fibers. These cells are reminiscent of vertebrate muscle satellite cells; we therefore named them satellite-like cells. Vertebrate muscle satellite cells participate in muscle repair, growth and regeneration8. 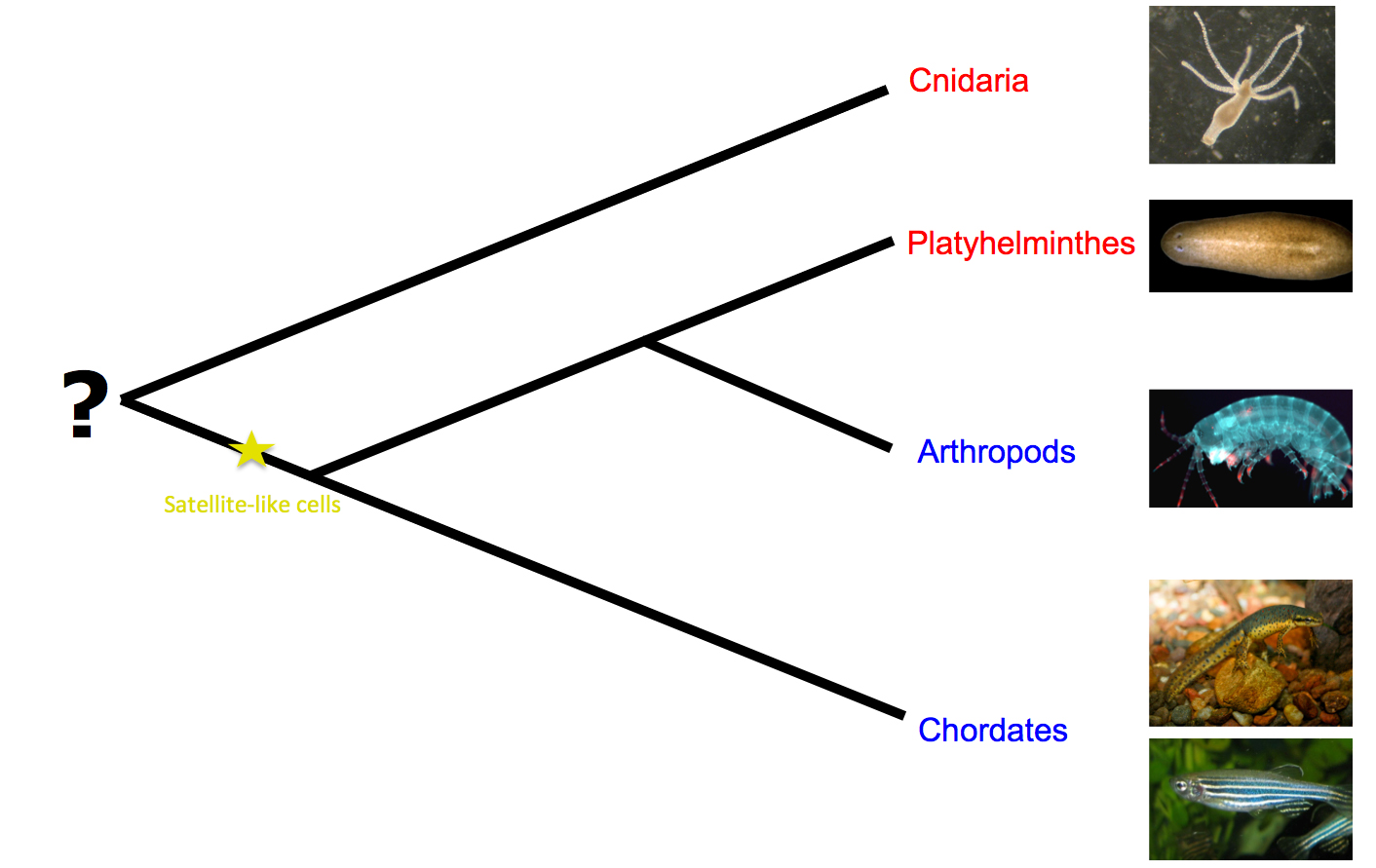 Where do we stand in the quest of understanding the evolution of regenerative capacity? Is regeneration an ancient trait that was lost in some lineages or has it evolved independently many times? Only informed guesses can be made.

Regenerative capacity may have evolved independently in different lineages. This could be easier to achieve than it is usually thought. The information for creating body parts is already encoded in the genome and has already been employed during embryonic development. Evolving the capacity to regenerate might just involve finding a way to redeploy this information.

Alternatively, regenerative capacity may be an ancient trait that was lost in certain lineages. In some animals, for example ones that are very short-lived, regeneration might not present a selective advantage. The loss of regenerative capacity could also be attributed to its incompatibility with another adaptive trait, such as fast healing via the formation of a fibrotic scar10.