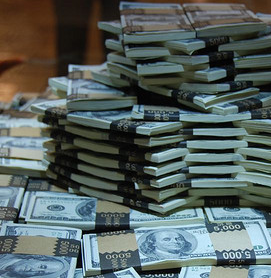 Eleven biologists received some unbelievable news this week: They will each receive 3 MILLION dollars from a newly established award. The Breakthrough Prize was founded by Mark Zuckerberg (Facebook) , Sergey Brin (Google) and venture capitalist Yuri Milner, with the goal of supporting research into life extension and curing diseases.

The Guardian interviewed several of the winners, and they’re all just floored by the ridiculous amount of money. Almost literally floored, even. “I almost fell over”, said Lewis Cantley, and Cori Bargmann “had to sit down on the floor for a while”.

While it’s great that there is a new source of funding for biomedical research, and these are definitely very worthy winners, I question the scale of the awards. I think it shows the level of disconnect between Silicon Valley and biology researchers: To the foundation, 3 million dollars per person appears to be a normal award amount, but I bet all eleven winners would have been just as happy, and far less shocked and confused, with even 10% of the money – which would be closer to the sort of amounts they’re used to receiving after a lot of hard work and grant-writing.

Breakthrough scientific research doesn’t come from just a handful of scientists who have already made a name for themselves, but from collaborations between many researchers. While I’m thrilled that the tech community has shown a real interest in the life sciences, I would have liked to see slightly smaller individual prizes, and maybe some money made available by the standard process of application and review to emerging labs, researchers, and initiatives. Preserving a broad network of researchers may in the long run be more rewarding than only awarding the top talent.

The winners seem to be allowed to spend the money any way they want to, though, and I’m excited to see what they come up with. I have some confidence that they will do their best to spread the wealth. Hans Clevers already mentioned plans to use some of his prize money to host a symposium for 150 invited collaborators in Amsterdam, which is something we definitely hope to hear more about.