In 2014, the British Society of Developmental Biology (BSDB) has initiated the Gurdon Summer Studentship program with the intention to provide highly motivated students with exceptional qualities and a strong interest in Developmental Biology an opportunity to engage in practical research. The 10 successful applicants spent 8 weeks in the research laboratories of their choices, and the feedback we received was outstanding. Please, read the student reports, kindly sent to us by George Hunt. 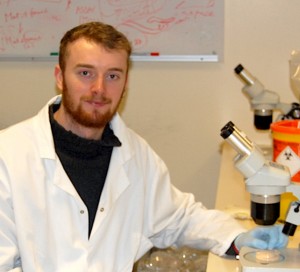 During the summer of 2014 I was a recipient of a Gurdon Summer Studentship awarded by the BSDB. The studentship provided the opportunity to undertake a research project in the Laboratory of Ian Hope at the University of Leeds where I study Biology.

Abnormalities in the development of the central nervous system have been implicated in the epilepsy group of chronic neurological disorders. These disorders affect fifty million people worldwide and are characterized by spontaneous recurrent seizures resulting from excessive, synchronous neuronal activity [1,2]. Improving our understanding of the biomolecular basis of epilepsy is of great importance in the search for new therapeutics. Caenorhabditis elegans provides a genetically amenable, and experimentally tractable system to model disease-relevant mutations and was the focus of this study.

Homo sapiens KCNT1 encodes a sodium-activated potassium channel that is widely expressed in the central nervous system and mutations of KCNT1 have been identified in patients with drug-resistant childhood-onset forms of epilepsy. The C. elegans KCNT1 orthologue slo-2 is widely expressed in both neurons and muscle cells [3] where it is activated during hypoxia-like physiological conditions by raised concentrations of chloride and intracellular free calcium [4]. Protein alignment identified KCNT1 amino acid residues implicated in childhood-onset epilepsy that are conserved from H. sapiens to C. elegans SLO-2. These KCNT1 variants, R474H and R928C, are associated with malignant migration partial seizures in infancy (MMPSI) [5] and autosomal dominant nocturnal frontal lobe epilepsy (ADNFLE) [6], respectively.

In order to generate R474H and R928C epilepsy-associated variants of C. elegans slo-2, equivalent mutations were introduced using the CRISPR-Cas9 system [7] to produce novel transgenic strains which can then be used to study the role of these mutations in the development of epilepsy.

Synthetic guide RNAs (sgRNA) were used to direct Cas9 nuclease activity to regions of the slo-2 locus in close proximity to the target mutational sites. Cas9-mediated cleavage generates double-stranded DNA breaks (DSBs) that are repaired in vivo by either homology-directed repair (HDR), using a homologous template, or by non-homologous end joining (NHEJ), which generates short insertion/deletion (indel) mutations. To incorporate the epilepsy-linked point mutations into the C. elegans genome, worms were microinjected with plasmid vectors expressing the modified sgRNAs and Cas9 alongside slo-2 fragments that had been PCR mutagenized to include the desired point mutations. This generated DSBs at the slo-2 locus followed by HDR to mend the DSB and introduce the desired point mutations. 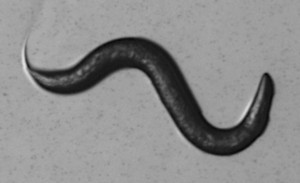 From fifteen F0 hermaphrodites injected, I obtained twenty-eight transgenic F1 individuals. Ten of these produced transgenic progeny and ten independent transgenic strains were established of which six had been targeted with the R474H equivalent alteration and four with the R928C equivalent. Microinjected DNA forms large extra-chromosomal arrays that are not transmitted to all progeny in a brood and the rate of successful CRISPR-Cas9 alterations in C. elegans varies depending on target loci [7]. To screen transgenics for alterations of slo-2, I performed single worm PCR on progeny of transgenic individuals to amplify slo-2 fragments containing the target mutation loci and assayed fragment length for the presence of indels by agarose gel electrophoresis. Following CRISPR-Cas9 generation of a DSB, activation of the NHEJ repair pathway can produce short indels at the repaired loci, providing a useful method for confirming successful CRISPR-Cas9 activity. Smaller than expected slo-2 fragments were detected in the progeny of transgenic individuals from three different strains; however, further extensive screening is required to determine whether these represent deletions within slo-2 or non-target amplification. Following confirmation of the efficacy of the CRISPR-Cas9 system the next step will be sequencing of slo-2 to identify mutants with the desired epilepsy-linked point mutations.

The transgenic and mutant strains will provide a useful resource in further studies of the biomolecular basis of drug-resistant childhood-onset epilepsies as they should allow production of the specific genomic modifications sought in slo-2. The effects of the slo-2 mutations on the functioning of the C. elegans neuromuscular system would then need to be characterized and findings could provide improvements in our understanding of how specific KCNT1 variants give rise to epilepsy. This research will contribute to an existing network of KCNT1 research currently being undertaken by Jonathan Lippiat and Steve Clapcote at the University of Leeds.

Overall, the BSDB Gurdon Summer Studentship provided a great opportunity to experience working in a professional research laboratory, and has strongly reinforced my desire to pursue a career in research.