Here’s an uplifting story about how a farmer and a developmental biologist met online and started a collaboration.

Earlier this month, I attended the annual Science Online conference in London. This year’s speakers included Sir Martin Rees of the Royal Society, former Member of UK Parliament Evan Harris, and a good selection of people who are involved in using the Internet to either communicate or facilitate scientific research.

One of the speakers in several panels was science writer and blogger Ed Yong, of the blog Not Exactly Rocket Science. On the first day of the meeting he spoke on a panel about science journalism, and on the second day he was on involved in a discussion about interacting with your readers online. He gave some good advice there, about communicating with your readers and knowing who they are. In Ed’s case, his audience is very general, including scientists as well as non-scientists, so his readers could very well be anyone.

On Saturday, Ed posted an anecdote that shows exactly how broad his readership is, and what he does to engage them. Since one of his tips at the Science Online meeting was to simply link to other blogs when they write it just so much better, I’ll send you back to his place for the full story, and will just summarize it here: 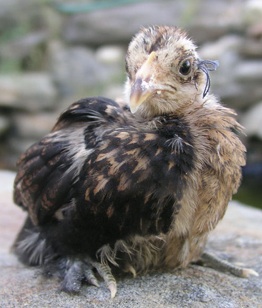 Several months ago, a paper came out about gynandromorph chickens. To refresh your memory: these chickens are female on one side of their body and male on the other side, and by studying them the group of Mike Clinton in Edinburgh revealed that in chickens sex identity is determined early in development and is autonomous for all cells (rather than being regulated by hormone levels). Ed wrote about the paper on his blog, and recently Paul Sanders, a farmer in Missouri, found that very post when he was looking for information on a curious-looking chicken (pictured left) that was born on his farm. Ed then put him in touch with Mike Clinton, and the resulting e-mail conversation between Sanders and Clinton shows how they’re going to collaborate to further investigate the development of gynandromorphic chickens. Since Sanders has access to the bird as well as the parents of the bird, Clinton can carry out more detailed genetic analysis. According to one of Clinton’s e-mails, Sanders’ observations about the size of the egg alone are already an indication that one of the theories about gynandromorphic development — that these animals originate from eggs with a double yolk — is not likely to hold ground!

It’s good to see the reader interaction that Ed mentioned at Science Online in action, and leading to collaborations in developmental biology! Do you know of any other examples of interesting collaborations in the field? We’d love to hear!