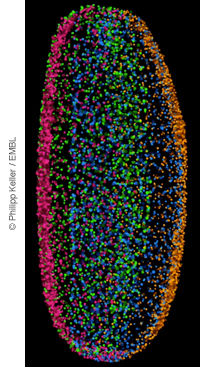 Using light microscopy to study developmental processes in situ is a bit tricky if your samples are not transparent. In that aspect, early zebrafish development is a walk in the park compared to studying non-transparent fly embryos, or even fish in a later stage of development.

But research published in Nature Methods this week comes with a solution. Thanks to Philipp Keller and his colleagues, it’s now possible to take very clear images of non-transparent samples, such as Drosophila embryos, or to monitor zebrafish development much longer – up to three days. This has produced a database of detailed images and movies of Drosophila embryo development.

A few years ago, the group developed a technique called digital scanned laser light sheet fluorescence microscopy (DSLM), in which a laser beam illuminates a slice of the sample, and a detector records fluorescence of just that slice. But that produced a very noisy signal in the presence of many refractive cell membranes – in other words, with non-transparent samples. To solve this problem, they changed the laser beam properties: Instead of a continuous beam of light, the signal was pulsed. By combining multiple pulsed images of the same section, the signal and noise were easier to distinguish, which led to a much clearer image.

How clear exactly? To test the new system (DSLM-SI), Keller monitored zebrafish development up to three days. Compared to studies done with traditional methods, he could see far more detail, including eye and midbrain development. When using DSLM-SI, they were also able to collect very detailed information of cell positions over time in a Drosophila embryo, and combined this information into a dataset with 1.5 nucleus data entries. You can see the resulting dataset, images, and movies on the digital embryo website.

(image via EMBL, courtesy of Philipp Keller and EMBL.)

(Read an interesting paper about developmental biology lately? Let us know on the Node!)