As a first-year graduate student, I had the good fortune of accompanying Dr. Pierre Rasmont (U. Mons, Belgium) and his lab group on an expedition to collect bumble bees in Turkey. At our first stop onto the dry but flower-rich volcanic lands, we each dispersed to collect bees. At the time I was working to reconstruct a phylogeny of world bumble bees and one of each of the endemic species from this region was needed. When we reconvened to share what we found, I, not wanting to sacrifice unnecessary lives, came back with a limited catch. Pierre frowned, so I commented, “I only need one of each” and to that he commented, “They all look the same!”  It was then I learned the extremes to which bumble bees can mimic each other. While in the Eastern United States bumble bees are yellow and black, in Turkey nearly every species is white with black bands and a red tail…only in the details of color and morphology can they be told apart. Across the world there are several dozen bumble bee mimicry patterns each differing by geographic region. These locally shared warning signals enable enhanced predator learning, reducing predation for all – a process known as Mullerian mimicry.

I became interested in deciphering the phylogenetic patterns of this color diversity, noting that color is highly labile, exhibiting so much intraspecific and interspecific diversity that little phylogenetic signal can be recovered. The ~260 species of bumble bees globally can exhibit nearly every combination of red/orange, white, yellow, and black color in their fluffy pile across their segmental sclerites, with some species exhibiting dramatic color variation by geographic region [1].   My PhD advisor, Dr. Sydney Cameron (U. Illinois, U-C), and I were excited about the potential of this system to inform Evo-Devo. How is it that these bumble bees are capable of attaining such color diversity? What mechanisms may be driving the modular coloration we see in these bees? She set out to determine the diversity in patterns and how patterns vary across the bee body, revealing that some segments of the body are more prone to change relative to others [2]. The places on the body where color transitions were most likely to take place appeared to me to be locations where segment fate-determining Hox genes shift. 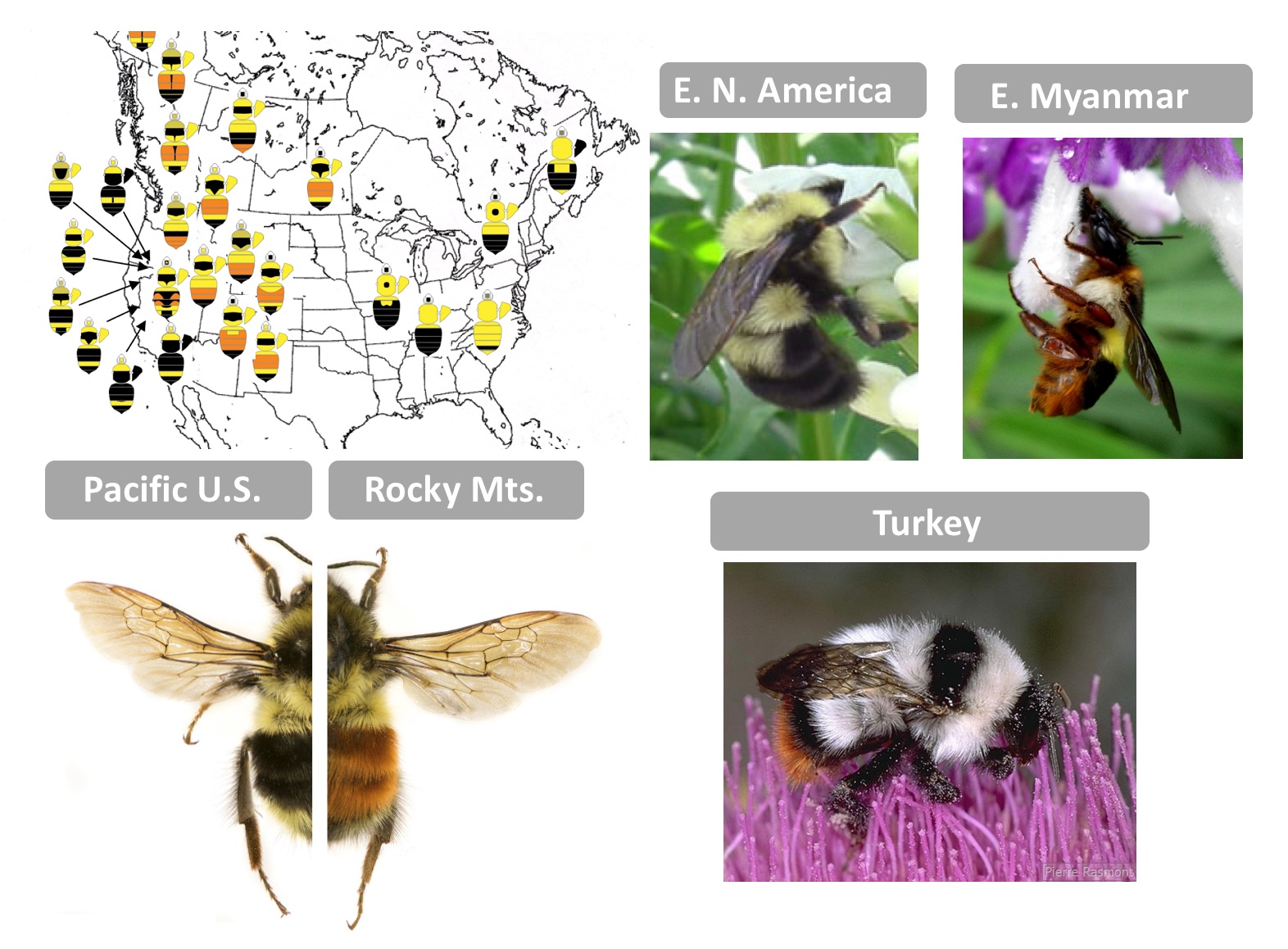 The evolutionary genetics literature however, would not predict that these patterns were driven by direct changes to Hox genes. Hox genes are highly pleiotropic, driving extensive body region-specific morphologies. Thus changes in the amount and locations of these genes should have large scale, often deleterious effects (e.g., antennapedia and bithorax). In Drosophila, nearly every case of color variation involves changes to a cis-regulatory module of a pigment gene in the melanin pathway.  Many pigment enzymes can be altered, but it is nearly always a pigment gene in cis [3]. The upstream regulators, as predicted in evolutionary genetics, stay unchanged.

To understand the genetic basis of color variation in bumble bees, I first set out to determine the pigments of their colored hairs, which yielded its own surprises. We discovered black is eumelanin, yellow is most likely a novel pterin (although melanin likely contributes) and that the red is a pheomelanin, the type of melanin that makes mammal hair and bird feathers red, but which was not thought until recently to be present in insects [4]. Thus color switches such as from black to red melanins lacked a clear enzyme candidate, as phaeomelanins are not part of known insect pigment pathways.  Building on technological advances, I decided to pursue whole genome approaches to discover genes driving color variation, and, the bumble bee Bombus melanopygus was an ideal choice. Bombus melanopygus has two color forms, one with a red abdominal stripe in the Rocky Mountain mimicry complex and another with a black abdominal stripe belonging to the Pacific Coastal mimicry group [5]. Previous work [6] revealed that this phenotype was under simple single-gene Mendelian inheritance, with red dominant to black, and that these color forms meet in a narrow hybrid zone, where they are genetically admixed [7].  These were perfect conditions for obtaining resolution in genome wide association analysis (GWAS).

With a NSF CAREER grant secured to pursue this project [8], graduate student Sarthok Rahman applied GWAS to determine the genetic basis of the color variation in B. melanopygus, identifying a single locus with just a few individuals.  We were excited to discover this locus fell in the cis-regulatory region between the abdominal fate determining Hox genes, abd-A and Abd-B. Is it possible that the pleiotropic Hox genes were changing their expression, counter to evolutionary genetics theory?

Discovering the expression patterns of these Hox genes was much harder than finding the locus. As a non-model system, the development of bumble bee pupae, the stage when coloration is established, had to be worked out. This was especially needed as bumble bees are highly labile in size, so time-based staging is unreliable. Li Tian, a postdoc at the time, developed a morphological staging system for bumble bee pupae that he used to perform comparative gene expression work [9; see time-lapse of pupal development below or download here].

This too took us longer than we would have liked as we originally focused on stages prior to the pigmentation process. Only later did we include the stages where color was being deposited, and discovered that Abd-B was differentially expressed concordant with this stage [10]. By comparing across segments of the body we discovered that Abd-B is upregulated only in the anterior abdominal segments bearing the color differences, a location it normally has little to no expression in, but only in the stages immediately prior to adult emergence. At this stage most abdominal Hox genes have low expression, concordant with the near completion of morphological change aside from color. This late-stage homeotic shift in Hox gene expression enabled segment-specific effects with little pleiotropic consequences, highlighting how upstream selector genes like Hox genes can be excellent evolutionary targets for promoting diversity as long as their shifting expression is compartmentalized.

Going forward we plan to dissect how Hox gene cis-regulatory regions enable these changes with transgenic approaches.  With this hyperdiverse system, our larger goal is to determine the role Hox genes might play in enabling the diversification across more bee species. Perhaps this story is unique to B. melanopygus (our analyses suggests the same variants are not involved in comimics) or perhaps Hox genes are commonly implicated across species but different regulatory targets are involved. With such diversity, our ability to study these mechanisms and fill out this story seems endless.