In a paper published today in Cell, Detlev Arendt, Raju Tomer and colleagues reveal evidence that the cerebral cortex evolved much earlier than previously believed. Using a new technique to detect and image simultaneously expressed genes in a compact brain area, they discovered that the gene expression patterns in the olfactory processing region (mushroom bodies) of the marine worm Platynereis dumerilii are strikingly similar to that of the vertebrate cerebral cortex – too similar to have evolved independently. The last common ancestor of Platynereis dumerilii and vertebrates lived around 600 million years ago, which means that the origin of our cerebral cortex can be traced back to the Precambrian era.

Previous studies that compared brain regions between different organisms would look at shape and location of the tissues, and found no cortex-like structure in any invertebrates – not even those more closely related to us than Platynereis is. To see the similarities between the worm brain and the vertebrate cortex, Raju Tomer developed a technique called cellular profiling by image registration (PrImR). This method enabled him to see each cell’s gene activity in the worm brain, and compare this information with gene expression profiles of the vertebrate cerebral cortex. 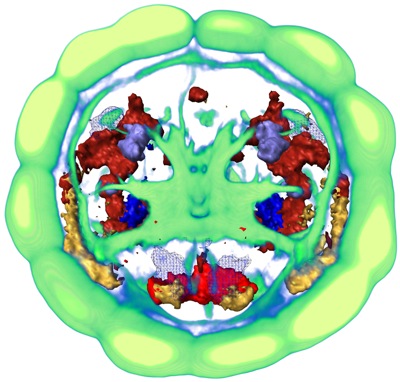 The image above shows a virtual Platynereis brain, composed of average images of the brains of 36 individual larvae at 48 hours old, with colour-coded gene activity patterns shown for each area of the brain.

The study suggests that we may need to reevaluate what is known about the evolution of the cerebral cortex. It would be interesting to use PrImR on other organisms to find out more about similar structures in other species.