How do you make an eye? One early trigger for eye formation in Xenopus, as a new Development paper from Michael Levin’s lab shows, is a small change in bioelectric signals. In fact, that trigger alone is enough to induce eye development in other parts of the body.

In an experiment that measured regions of hyperpolerization in the developing Xenopus embryo, the researchers found two small hyperpolarized spots in the anterior neural field – exactly where the eyes are later formed. Was this change in transmembrane potential (Vmem) related to eye development? To find out, the group carried out a series of experiments to show that the hyperpolarized cells were indeed the same cells that later formed the eye. Not only that, but depolarizing these cells disrupted eye development, suggesting that the transmembrane potential is part of a required signalling mechanism for eye formation.

Eye development involves the formation of an “eye field” from a region of the anterior neural field. This is regulated by eye field transcription factors (EFTFs) such as Pax6 and Rx1. Levin and his colleagues demonstrated that the transmembrane potential in the eye field regulates expression of these EFTFs. When they depolarized the hyperpolarized cells in the eye field, expression levels of Pax6 and Rx1 went down, which explains why eye development was affected upon depolarization.

But what happens if you alter the Vmem not just in the region where eyes are normally formed, but in other parts of the body? To test this, the researchers globally disrupted the Vmem by introducing dominant negative potassium channel subunits into all four blastomeres of four-cell embryos. Within the eye region, the results were as before: many of the embryos did not form functional eyes in the eye region when the Vmem was disrupted. And outside of the eye region? After just changing the transmembrane potential, eyes started to pop up in different parts of the body! Several of the embryos now developed eye tissue in the gut area, and these ectopic eyes have morphological characteristics very similar to regular, functional, eyes. 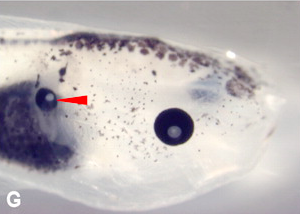 Ectopic eye, with lens, formed on a tadpole’s gut.

Eye formation caused by a change in transmembrane potential outside of the eye region was also associated with an upregulation of the expression of eye field transcription factors Pax6 and Rx1, suggesting that a bioelectric signal alone is sufficient to initiate the molecular mechanisms required for eye development.

So why don’t we have eyes everywhere? In the discussion section of the paper, the authors hypothesize that a narrow, specific, range of Vmem is associated with the development of particular tissues. This suggests that the eye region is the only area where the Vmem is at the optimal level to upregulate the required transcription factors at the right moment in development to form an eye.

Bioelectric signals also control other physiological processes, such as cell migration and wound healing, but this is the first study that shows a role of bioelectric parameters in eye development.

Development is more than gene regulation alone, and we’re slowly starting to find out all the mechanisms and processes that work together to form organs and organisms.