Satina, S., Blakeslee, A.F., and Avery, A.G. (1940) Demonstration of the Three Germ Layers in the Shoot Apex of Datura by Means of Induced Polyploidy in Periclinal Chimeras. American Journal of Botany 27, 895-905

If you read about plant development in textbooks you will be told that the shoot meristem, which gives rise to all the stems, leaves and flowers, is formed of distinct cell layers. In dicotyledonous flowering plants there are three layers: the outermost layer (L1) will give rise to the epidermis; the L2 layer will produce most of the subepidermal tissues of leaves and flowers; and the innermost L3 layer forms the stem and vasculature tissues. That these layers exist and that they make different contributions to the shoot does not seem so surprising now, but there was a time when even the number of the then called ‘germ’ layers was a topic of debate. There had been much interest in meristems since the mid 19th century, and scientists like Hanstein had already suggested that meristems might have 3 germ layers in some plants. There was the need to carefully determine whether that was the case in all higher plants.

In the late 1930s, Amos Avery and his colleagues were on the case. But how do you investigate cell lineages when you are 60 years too early to use ‘basic’ labelling techniques like GFP-tagged proteins? What was needed was a way to genetically modify some of the cells of the plant so that you could identify their descendants and hence follow their fate, but it didn’t necessarily have to be a precise change. Realising this, Avery and colleagues took a blunt approach. They soaked seeds of Datura plants in colchicine to induce chromosome duplications. As colchicine inhibits spindle formation, chromosome duplication occurs without cell division, generating cells of different ploidy within a single seed – a chimera. It is important to note that the shoot meristem is fully formed in the embryo and hence these treated seeds contained shoot meristems in which some cells were polyploid and others were not. 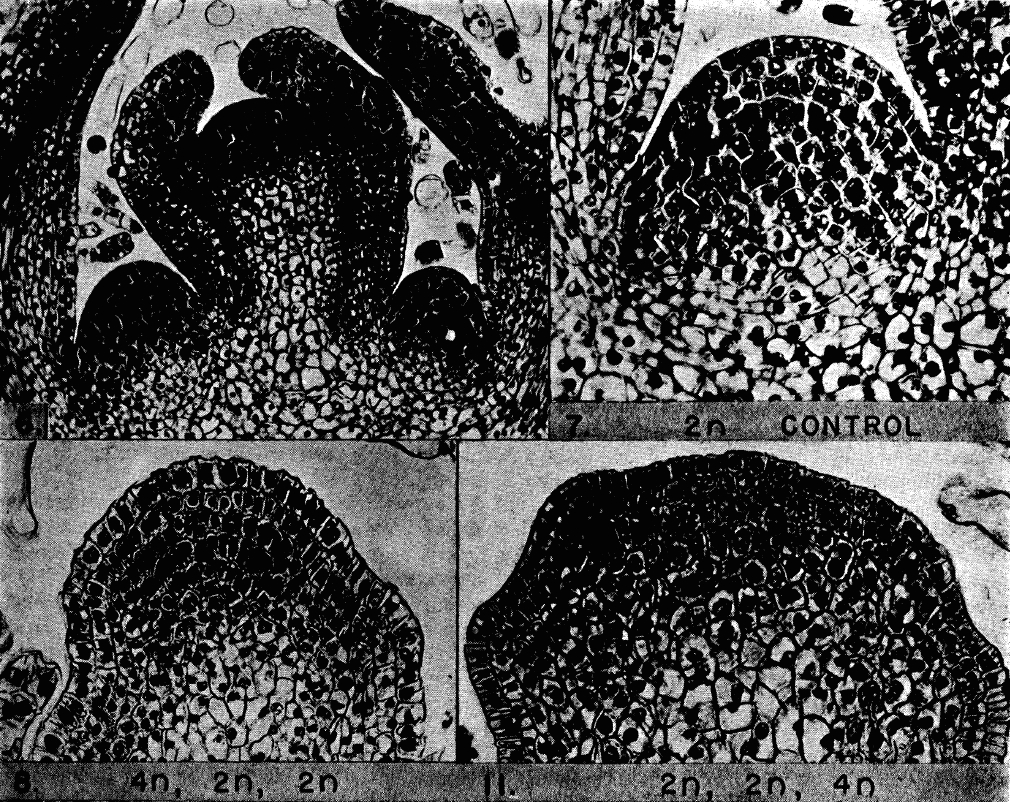 Reproduced with permission of the American Journal of Botany

The seeds were grown in fields over the summers of 1938 and 1939, and the plants were regularly pruned to encourage the formation and outgrowth of lateral shoot meristems (which were ultimately derived from subsets of cells in the primary embryonic shoot meristem). Such an experiment is of course a game of chance, and as a result Avery and his colleagues obtained a huge range of chimera types, which they then used to study different aspects of plant development. In this particular paper, they examined the shoot meristem. Using cell size as a broad readout of ploidy, they examined how the cells of the shoot meristem were affected by the procedure. They noticed that you could find plants in which all the cells of the first layer had a different ploidy to the rest of the meristem. Sometimes they found plants in which the change in ploidy happened only in the cells of the second layer, and sometimes only in the cells of the third layer. And very occasionally you could find a plant where all three layers had different ploidy, e.g. the first layer was 2n, the second layer was 4n and the third layer 8n. Since ‘the response of any one layer to colchicine is independent of the response of the other two’, the authors concluded that the shoot meristem of Datura must have three independent germ layers. They also observed another phenomenon that is now textbook fact, namely that the cells in the 1st and 2nd layer (L1 and L2) mainly undergo anticlinal cell divisions (where the division plane is perpendicular to the cell layer) while the cells of the third layer can undergo divisions in any orientation.

This paper essentially reported the results of a single experiment, and did not go on to give further details on the subsequent development of the germ layers and on which organs originated from which layer. This is perhaps something we would expect in a modern paper, but science was different in those days so the authors saved those experiments for a subsequent paper. However, one should not underestimate the importance of this work. As Jane Langdale (who recommended this paper) put it, this was the ‘first demonstration that shoot apical meristems of flowering plants operate in the context of functionally distinct layers. A concept that is now so embedded that students rarely wonder how it was first shown.’

This study is a prime example of an early clonal analysis in plants. It provided direct information about the cell division patterns in shoot apical meristems and laid the basis for the tracing of cell lineages and the origin of tissues. Most importantly, it established the existence of three germ layers in plants.

Though molecular genetics has shown the importance of communication among layers in shoot meristem organization, we are far away from understanding its complexity and how this communication orchestrates layer-specific gene expression and the identities of individual cell layers. In the data rich science that we practice today, this paper is a must read for every developmental biologist, as it conveys the power of a single and carefully thought about experiment.

The American Journal of Botany has kindly provided free access to this paper until the end of June 2016!