This is the first of several Node Posts that the Developmental Neurobiology Seminar Class at Reed College in Portland, Oregon (USA) will be posting. Each week, 12 advanced undergraduate students and one professor get together to discuss a concept and paper related to developmental of the visual system. Some of the papers spark a lot of discussion and interest and small groups of students work together to write posts that are summative, insightful, and hopefully thought-provoking. Hope you enjoy sharing in our “conversation”.

Is there anything quite like hearing a great song for the first time? Or smelling the perfume of someone you haven’t seen in too long? Or living without the taste of sandwiches? Maybe not—but anyone who has been in the dark without a flashlight knows that sight may be the most important sense we possess.

Recently, we read and discussed two papers (Cavodeassi, et al., 2013 Development 140, 4193-4202 and Bielen, H. and Houart, C., 2012 Developmental Cell 23:4, 812-822.) that investigated the early development of the tissues that allow us to see. Regionalization of the forebrain development is one of the first events of vertebrate eye morphogenesis. Eye-fated cells must segregate from the surrounding telencephalic-fated cells and then evaginate to form optic vesicles, which eventually give rise to eyes. Specific molecular cues (like BMPs from the non-neural ectoderm and Wnts from the caudal region of the neural plate) seem to be important for specifying eye and telencephalic fate, but many questions about how these two groups of cells segregate and coalesce remain.

How do cells know where to go? Recent work from Cavodeassi and co-workers (2013) suggests that one of the master transcriptional regulators of eye fate, Rx3, helps keep eye-fated cells in the right place by regulating Eph/Ephrin expression.

Eph/Ephrin signaling is like a molecular handshake: both the Ephrin ligands and the Eph receptors are membrane bound proteins, making signaling possible only with cell-cell contact. Unique among receptor-tyrosine kinases, both cells receive a message from the binding event, just like when you shake. Unlike the normal attraction that comes with hand-shaking, Eph/Ephrin signaling is usually repulsive, causing Eph-expressing cells to congregate together, away from Ephrin-expressing cells, and visa-versa.

Cavodeassi and colleagues show that Ephrins are expressed in the eye field and Ephs in the developing telencephelon. They also provide convincing evidence that Rx3 inhibits Ephrin expression in eye-fated cells. The signals upstream of Eph expression in the eye-field remain mysterious. The authors next performed a series of transplantation experiments to examine how specific Ephs and Ephrins influence cell sorting and eye morphogenesis. When cells expressing specific Ephs or Ephrins are transplanted into the ANP (anterior portion of the neural plate), most cells expressing the Eph ephb4a segregate to the telencephalon, whereas most transplants expressing the Ephrin efnb2a segregate to the eye field (see reprinted Figure 5 from their paper below). 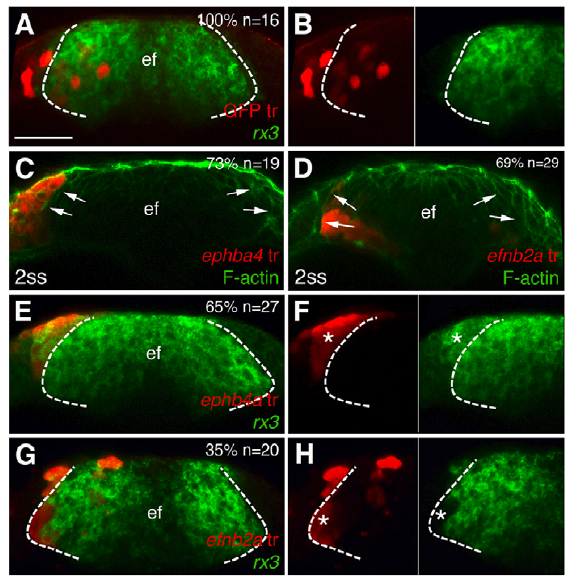 Regionalization versus cell fate: Interestingly, Cavodevassi and colleagues go on to show that this segregation is independent of cell fate. To understand this distinction, imagine a room full of red-shirted carpenters on one side and green-shirted electricians on the other. If some of the carpenters were forced to don green shirts and then ended up with the electricians, it would be clear that the people were separated by shirt color, not profession. Analogously, eye-fated cells forced to express ephb4a localize out of the eye field but continue to express mab 21/2, an eye field marker (see reprinted Figure 6B). Similarly, cells fated as telencephalic cells but forced to express efnb2a localize to the eye field though they never express mab 21/2 (see reprinted Figure 6C). These data suggest that eph/ephrin signaling does not impact the ultimate fate of the cells, but is essential for eye and telencephalic cells to sort into the necessary morphogenetic clusters that are required for eye and brain development. 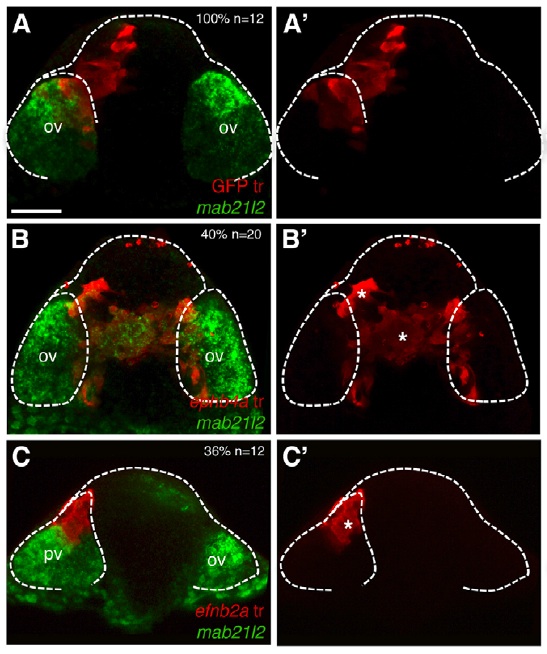 Conclusions: Cavodeassi and colleagues nicely demonstrate that cell segregation behavior is dependent on Eph/Ephrin signaling, but independent of cell fate. The signaling pathways that determine eye field versus other forebrain fates are still mostly unknown, although a recent paper by Bielen and Houart (2012) suggests that BMP may play a role in this switch. With the cellular and molecular data provided by these two papers, the scientific community is that much closer to shining a flashlight into the darkness of the unknown.