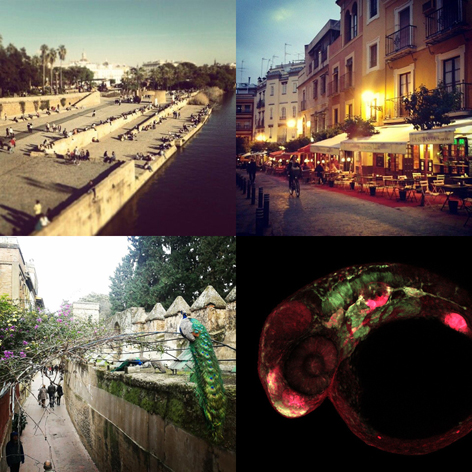 Scenes from Seville (my pics) and a transgenic embryo  (A. Fernandez-Miñan)
After over a decade working in Europe, I recently returned to Costa Rica to start a lab at the University of Costa Rica (UCR), in San José. Life in the Tropics has its perks, such as regular sightings of sloths and raccoons from my office window. However, starting up the first Developmental Biology lab in the country will require some patience, partly due to paperwork but mostly due to the restricted access to funding. Additionally, all researchers at UCR have lecturing responsibilities that somewhat restrict the time spent in the lab. Thus, resourcefulness can make a difference. I needed the space to produce transgenic fish lines for my project while we wait for the lab to be ready… Happily, I knew the place where I could achieve this, and that a Development Travelling Fellowship could help fund my visit.

The CABD (Centro Andaluz de Biología del Desarrollo) in Seville created the “Aquatic Vertebrates Platform” back in 2007, which provides in-house and guest scientists with the tools, space and training to produce and grow transgenic fish lines. As I had worked at CABD during my last postdoc (in Juan R. Martínez-Morales’ lab), I was familiar with the services the Platform provides and got in touch with José Luis Gómez-Skármeta, Platform Coordinator, and Ana Fernández-Miñán, the Scientific Manager. With their support, I submitted my proposal for the travel grant. It was great news to find that I’d been awarded the Fellowship and could indeed travel to Seville in February, before the start of the academic year at UCR.

The Platform houses over 40 multi-level tank racks, for both zebrafish and medaka (as well as racks for Xenopus). Some of that space is available to raise and maintain any lines produced, for a small fee. Visiting scientists, such as myself, also receive support when picking a transgenesis strategy and preparing their expression vectors, from using the well-established Gateway Tol2 kit (my choice) to using the Zebrafish Enhancer Detector (ZED), produced at CABD, for enhancer activity assessment.

Additionally, for those scientists who require it, gain and loss-of-function experiments with mRNA or morpholino microinjections can be carried out on site, as well as transplantation experiments for analysis of mosaic expression patterns. Results can be analysed using either the fluorescent stereoscopes or using the confocal microscopes available in the Microscopy Facility (run by Katherina García, who is very friendly and can help optimize conditions for particular experiments). What’s more, 3C and 4C technologies are used regularly at CABD. This means that an added bonus to the Platform is the chance for visiting researchers to set up collaboration projects if they require the use of these technologies.

Here in San José we are starting small, so I only required the space to produce and grow the transgenic fish. At UCR I have been collaborating with a Human Genetics lab (Henriette Raventós leads the group), which has been studying the genetics of mental illnesses for over two decades. We intend to use zebrafish I produced in Seville to study the activity of some of the candidate genes that have been identified in Costa Rican populations, and which have not been studied during CNS development. It is a small project, but it brings great satisfaction to finally provide our University (and the country) with a well established, reliable and convenient research animal model. Although I might not have taken advantage of the many resources the Platform at CABD provides, as I saw the beautiful, fluorescent green eggs under the stereoscope, it became clear that this visit will hasten the establishment of our fish colony. By the time we receive the adult fish that are now growing in Seville, we hope to have a small, but adequate fish facility to host them.

The best way to celebrate the success of our efforts was to finish off the visit to Seville with some of that great Spanish wine and ham. It might have been the wine, but at some point I remembered Dr. Seuss’ Green Eggs and Ham book, which I used to read at school, and thought: After this experience, if am ever asked, my answer would have to be: I like green eggs and ham! I do like them, Sam-I-am!

One thought on “Green Eggs and Serrano Ham”