The correct development and functioning of the spinal cord depends on the patterning, proliferation and differentiation of neural progenitor cell cohorts along the dorsoventral axis of the neural tube. But how are the numbers of these cells controlled? On p. 1893, Stuart Wilson and colleagues demonstrate that the cadherin FatJ acts via the Hippo pathway to regulate the size of neural progenitor pools in the chick neural tube. Using a large-scale RNAi screen of all cadherin genes expressed in the neural tube, the researchers identified a role for FatJ in neural tube patterning. FatJ, they report, is expressed in intermediate regions of the neural tube, and a loss of FatJ leads to an increase in the size of the progenitor pool in this region. This effect is mediated via the Hippo pathway component Yap1. Thus, this first report of a large-scale RNAi screen in a whole vertebrate organism reveals an important role for FatJ in controlling the proliferation and differentiation of specific interneuron classes.

Inductive interactions between endodermal and mesodermal cells play a role in organogenesis, but the molecular nature of these interactions are unknown. Keiichi Katsumoto and Shoen Kume (p. 1947) now demonstrate that reciprocal signalling mediated by the chemokine ligand CXCL12 and its ligand CXCR4 can regulate pancreatic fate in chick embryos. The researchers show that, prior to blood vessel formation, angioblasts reside in close proximity to the somatic mesoderm and the gut endoderm, tissues from which pancreatic precursors arise. Importantly, they demonstrate that CXCL12 expressed in the gut endoderm functions to attract these angioblasts, which express its receptor CXCR4 and in turn signal back to the gut endoderm to induce pancreatic cell fate; ectopic expression of Cxcl12 attracted angioblasts and resulted in an expanded pancreatic bud, whereas a CXCR4 inhibitor prevented angioblast migration towards the gut endoderm and perturbed vessel formation. The authors propose that reciprocal CXCL12-CXCR4 signalling can spatiotemporally regulate angioblast migration and pancreas induction, shedding light on the early mechanisms that establish pancreatic fate.

During Drosophila oogenesis, interactions between somatic cells and germline cells are crucial for oocyte polarisation and the subsequent formation of the body axes, but the molecular nature of the signals that regulate these interactions is not known. Here, on p. 1991, Trudi Schüpbach and co-workers show that, by regulating myosin activity, protein phosphatase 1β (PP1β) in the posterior follicle cells (PFCs) of Drosophila ovaries controls the generation of an oocyte polarising signal. The researchers first identified a loss-of-function mutation of flapwing, which encodes the catalytic subunit of PP1β, that disrupts oocyte polarisation. They show that excessive mysosin activity in PFCs caused by PP1β disruption leads to defective PFC Notch signalling and endocytosis. This sensitivity to defective Notch signalling, they report, requires JAK/STAT and EGFR signalling in the PFCs. Importantly, the researchers also identify a Notch-independent role for myosin activity in controlling oocyte polarisation, highlighting an additional link between the mechanical force-generating machinery of the cell and the ooctye polarisation pathway.

In amniotes, cardiac neural crest (NC) cells contribute to the septum of the heart outflow tract to allow for separation of the systemic and pulmonary circulations. It is not known, however, whether cardiac NC cells are also involved in outflow tract septation in amphibians. Here, Lee and Saint-Jeannet show that cardiac NC cells are dispensable for outflow tract septation in Xenopus (p. 2025). Using a combination of tissue transplantations and molecular analyses, they show that the amphibian outflow tract is derived from precursor cells in the second heart field, as is observed in birds and mammals. In contrast to the situation in amniotes, however, the second heart field, and not the cardiac NC, gives rise to the septum of the Xenopus outflow tract. The researchers propose that this significant difference is an amniote-specific novelty that has been acquired evolutionarily to increase the mass of the outflow tract septum with the need for a fully divided circulation.

X-chromosome inactivation (XCI), which is achieved by chromosome coating with Xist RNA and repressive chromatin modifications, results in the silencing of one of the two X chromosomes in female cells. In early mouse XX embryos, the paternal X chromosome is silenced during imprinted XCI. However, in pre-implantation mouse embryos, inner cell mass (ICM) cells reverse this imprinted XCI in order to initiate random XCI later in development. Now, Terry Magnuson and colleagues show that, during this reversal process, gene transcription from the inactive-X precedes the loss of Xist coating (p. 2049). By analysing the kinetics of X-chromosome activity in developing ICMs, the researchers show that reactivation of gene expression from the inactive-X can occur in the presence of both Xist coating and repressive histone H3K27me3 marks, suggesting that X-linked gene transcription and Xist coating are uncoupled during this period. This finding, they propose, alters our perception of the reversal process and supports the existence of Xist-independent silencing mechanisms in the mouse embryo.

PIN-FORMED (PIN)-dependent auxin transport is essential for many aspects of plant development, and PIN proteins show a polar localisation within cells that determines the direction of auxin flow. Here, Masao Tasaka and co-workers show that Arabidopsis MACCHI-BOU 4 (MAB4)-like proteins can specifically retain polarised PIN proteins at the plasma membrane of cells and, hence, can control directional auxin transport and plant development (p. 2069). Using genetic anaylsis, the researchers show that combined mutations of MAB4 subfamily members result in auxin-related phenotypes and severe reductions in PIN polarisation. Furthermore, they report, mutations of MAB4 genes result in increased PIN internalisation from the plasma membrane but have no effect on intracellular trafficking. Notably, they show that the MAB4 subfamily proteins are localised to the cell periphery in a polarised manner almost identical to that of PIN localisation. These findings suggest that MAB4 proteins, which are related to NON-PHOTOTROPHIC HYPOCOTYL 3 (NPH3) proteins, may regulate the specific localisation of PIN proteins to the plasma membrane. 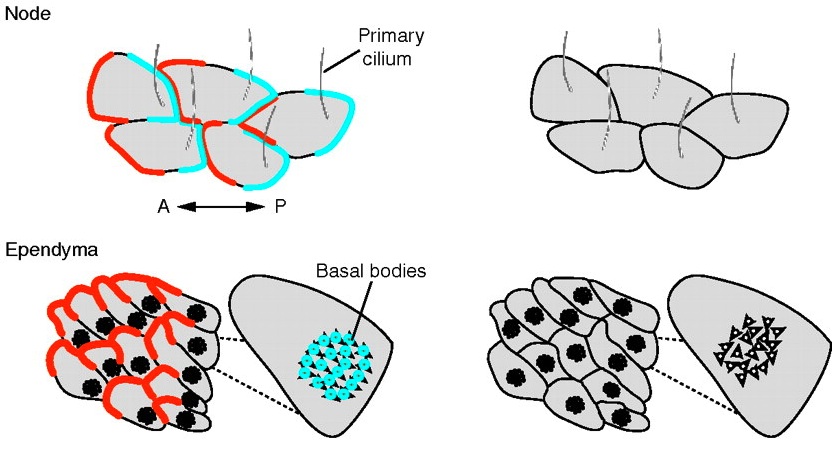 Planar polarity refers to the coordinated polarisation of cells or structures within the plane of a tissue. Here, Goodrich and Strutt review the molecular mechanisms and cellular consequences of planar polarization, identifying common principles of planar polarity in animal development. See the review article on p. 1877