Shaping the embryo towards gastrulation

Spatial mapping in the brain

Many sensory systems show topographic mapping: the spatial organisation of peripheral receptors is preserved in the brain regions where the sensory information is relayed. One example of such mapping is found in the mouse somatosensory system, where there is clear spatial organisation of the trigeminal ganglion (TG) neurons innervating the whiskers and of their central axons, which in turn project somatotopically to the brainstem. Whisker pattern provides a template for somatotopic map formation, but is it sufficient? Filippo Rijli and colleagues (p. 3704) have devised an elegant neuronal tracing experiment to investigate this, using an Edn1 mutant mouse line that has ectopic whisker rows in the lower jaw. They find that TG neurons innervating these ectopic whiskers acquire molecular characteristics of neurons that normally innervate the whiskers of the upper jaw, suggesting that peripheral input influences the molecular signature of these neurons. However, spatial segregation of these neurons and their axons is poor and topographic mapping fails. Thus, while peripheral signalling influences neuronal identity – and, the authors show, can at later stages cause some repatterning of neuronal targeting – it is not sufficient to instruct topographic mapping in the brain; neuron-intrinsic systems are also essential.

Endocrine cell differentiation in the pancreas must be tightly controlled to produce appropriate numbers of each endocrine cell type in the islets. Dysregulation of this process can cause severe physiological problems – diabetes, associated with loss of β-cell generation or function, being the most obvious example. One transcription factor known to be involved in β-cell differentiation is Mnx1, mutation of which is associated with neonatal diabetes. By inactivating Mnx1 in either endocrine progenitors or β-cells, Fong Cheng Pan and co-workers have provided insights into the roles of this key regulator in mouse (p. 3637). They find that Mnx1 acts as a lineage specification factor: upon its depletion, β-cells fail to differentiate but δ-cell number is increased. Mnx1 is also needed for β-cell maintenance: mutants show extensive β- to δ-cell transdifferentiation. Intriguingly, the authors identify a small population of escaper β-cells in which Mnx1 has not been depleted, allowing expansion and differentiation; these cells then show enhanced proliferation and are able to restore (and in fact surpass) the normal β-cell number and function in the adult. Together, these data demonstrate that Mnx1 plays multiple important roles in endocrine pancreas development and function, and highlight potential mechanisms of compensation for β-cell loss.

Cells on the move: keeping polarised with Pak

In culture, cells typically lose their apicobasal polarity and their cell-cell interactions when they migrate. However, in vivo, collective cell migration is a common phenomenon, and apicobasal polarity is often at least partially maintained. How and why migrating cell clusters retain their apicobasal polarity is still poorly understood. The border cell cluster in the Drosophila oocyte provides an accessible model to address these questions, which Mohit Prasad and colleagues (p. 3692) have exploited to analyse the role of the Pak3 kinase. The authors find that Pak3 depletion in migrating border cells impairs migration – likely due to defects in the direction, length and stability of the protrusions extended by the border cells. These data suggest that forward-rear polarisation of the cluster is impaired. However, there are also severe defects in apicobasal polarity, and the authors define a signalling cascade involving Rac1, Pak3 and the JNK pathway, which regulates the apicobasal localisation of polarity proteins. As well as identifying another important player regulating collective cell migration, these data suggest an intriguing link between forward-rear and apicobasal polarity, which has yet to be investigated further.

Strigolactones (SLs), first identified for their role in parasitic and symbiotic interactions in the rhizosphere, constitute the most recently discovered group of plant hormones.  In their poster article, Catherine Rameau and colleagues summarize current understanding of the SL pathway and discuss how this pathway regulates plant development. See the Development at a Glance article on p. 3615 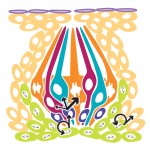 The sense of taste, or gustation, is mediated by taste buds, which are housed in specialized taste papillae found in a stereotyped pattern on the surface of the tongue. Here, Linda Barlow reviews how the pattern of taste buds is established in embryos and discusses the cellular and molecular mechanisms governing taste cell turnover. See the Review article on p. 3620