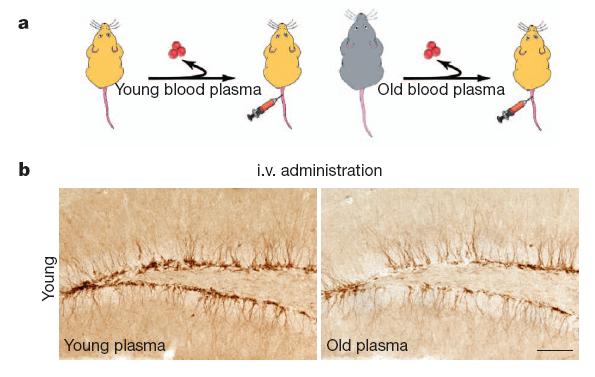 The ability to learn and form memories are cognitive functions associated with the brains ability to produce and co-ordinate new neurons effectively. These cognitive abilities are well known to degenerate with age due to diminishing neurogenesis. This study published in Nature, shows that reduced regenerative ability of the brain is due not only to intrinsic cues from the central nervous system, but also extrinsic blood-borne cues communicating with the neurogenic niche via closely surrounding blood vessels. This investigation aimed to find molecular differences in the systemic environment of ageing mice using a heterochronic parabiosis study to identify a correlation between blood-borne factors and neurogenic decline.

To address this, young mice (3-4 months) were exposed to the systemic environment of old mice (18-20 months). This was achieved by the intravenous injection of plasma obtained from an old mouse into a young mouse. The change in systemic environment produced mice with deficient synapse plasticity and reduced cognitive functions such as learning and memory. Proteomic analysis comparing the plasma of young and old mice revealed a correlation between ageing and a group of chemokines. Of particular interest was the chemokine CCL11 which has not been linked previously with ageing. Administration of CCL11 by intraperitoneal injection caused a reduction in adult mouse neurogenesis and in turn these mice demonstrated impaired learning and memory. Further investigation showed this chemokine to increase in an age dependent manner in human plasma and cerebrospinal fluid indicating similarity in age related systemic content across species.

Could the molecular content of our systemic environment be responsible for the neurogenic signs of ageing? This study gives convincing evidence for a link between certain age related blood-borne factors with diminishing neurogensis and cognitive function associated with ageing. The converse to this study is of course, what pro-neurogenic factors may be present in the systemic milieu. These could have potential in future therapy for age related neurogenic disorders.

The full paper can be found by following this link

One thought on “Is ageing in our blood?”