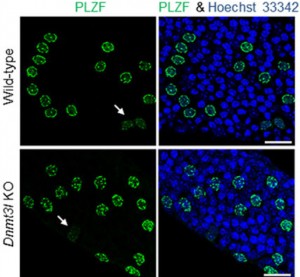 Decisions, decisions…aren’t those one of our main worries? It is certainly the everyday worry of a stem cell! Understanding stem cell decisions is a central question in the field: how do stem cells manage to keep the right balance between self-renewal (make identical copies of themselves) and differentiation (produce specialized cells)? How do stem cells choose between quiescence and proliferation? Good models to study these decision-making mechanisms are stem cells located in highly renewable tissues, such as the skin, the gut, the blood and the testes, since their specialized cell output is constant and huge.

It is currently known that in these tissues, some stem cells will stay quiescent in order to avoid premature exhaustion. This allows the long-term maintenance of the stem cell population and ensures that organ function is maintained throughout life. However, little is known about how these quiescent stem cells decide to stay quiescent.

In a recent study published in Development, Liao and colleagues showed that the protein Dnmt3l promotes the quiescence of spermatogonial stem cells (stem cells of the testes). They genetically engineered a mouse model in which they switched off the gene producing Dnmt3l (called Dnmt3l KO). They showed that spermatogonial stem cells in Dnmt3l deficient mice were abnormally distributed in the testes and that they proliferated more than in normal mice (wild type).

In this picture you can observe the testes of normal mice (wild type, top of the panel) and of Dnmt3l deficient mice (Dnmt3l KO, bottom of the panel). In wild type mice, the expression of PLZF, a marker for spermatogonial stem cells, is mainly perinuclear (ie: slightly around the nucleus identifiable by Hoescht 33342 in blue), a pattern specific to quiescent stem cells. In Dnmt3l KO mice, the expression of PLZF is mainly punctate (ie: small dots within the nucleus), a pattern specific to active/proliferating stem cells. From this, authors conclude that spermatogonial stem cells in Dnmt3l deficient mice proliferate more than in wild type mice, hence demonstrating a key role of Dnmt3l in regulating the quiescence/proliferation decisions of spermatogonial stem cells.

This study, among many others, is a step closer to a good understanding of how stem cells make decisions between quiescence and proliferation and/or self-renewal and differentiation. These decisions, when good, ensure the maintenance of healthy tissues throughout our lives…Bad decisions however, can lead to disease, and understanding how a stem cell makes the wrong decision is the first step to design a strategy to prevent it!