Have you ever met a Nobel Laureate? 650 lucky young researchers are currently spending the week with 59 previous Nobel Prize winners from the fields of physiology or medicine, physics and chemistry. Each year, a group of Nobel Laureates meet in Lindau, a German town (and island) at Lake Constance, close to the Swiss and Austrian borders. They share ideas from their respective fields with each other, and with a selection of young researchers.

The young scientists that are accepted to attend the meeting have undergone a rigorous selection process, and about forty thousand applied to fight for the 650 spots. If that sounds like a difficult way to get invited to attend a meeting, remember that the selection process for the speakers was even harder: they have to already have a Nobel Prize! 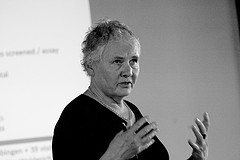 The meeting programme is a dizzying collection of big names from all areas of science. Developmental biologist Christiane Nüsslein-Volhard presented yesterday (pictured) in the same session as climate scientist Paul Crutzen. Different fields, and speakers you would not normally find at the same meeting, but the goal of this meeting is to cross disciplinary boundaries.

For those of us not at Lindau, there are plenty of ways to keep up with what’s going on via the web. The most convenient way to follow the meeting while it going on is through the special meeting website run by Nature and Spektrum, who have a team of bloggers present at the meeting. The page also aggregates all Twitter activity and photos related to the meeting, displays video interviews, and links to live streams of the lectures. Another good site to visit – even after the meeting is over – is the official Lindau Nobel Laureate Meeting website itself, which contains information about the format and history of the event.

The reports coming out of Lindau this week make it sound like an amazing event. I wonder how many of the young researchers who got to attend will later go on to win a Nobel Prize – even if just to be invited again!

(Photo of Christiane Nüsslein-Volhard speaking at the meeting, by gedankenstuecke on Flickr.)