Stem cells have often been imaged live in culture, but very few stem cell systems are conducive to live imaging within their native tissues.  An essential property of adult stem cells that they are maintained at specific anatomical locations called niches.  The interactions between stem cells and their niche are crucial, but are often disrupted when stem cells are studied in vitro.  In our recent Development paper, we use live imaging to directly watch male Drosophila germline stem cells (GSCs) in action within their native niche by ex-vivo imaging of intact testes.  We find that while wild type GSC divisions usually result in the production of a stem cell and daughter cell, they occasionally produce two stem cells or two daughter cells.  Our findings highlight a flexibility in stem cell output that is modulated during regeneration similar to mouse spermatogonial stem cells (Nakagawa et al., 2007, Nakagawa et al., 2010).

Niches are usually composed of stromal cells that activate developmental signaling pathways in nearby stem cells, thus maintaining them in an undifferentiated state.  The cluster of non-dividing stromal cells to which germline and somatic stem cells in the Drosophila testis apex are attached is appropriately called the “hub” and secretes cytokines required for the maintenance of both stem cell populations.  Cells adjacent to the hub have activated Jak-STAT signaling, and remain undifferentiated.  Cells further away from the hub initiate differentiation and eventually form sperm. 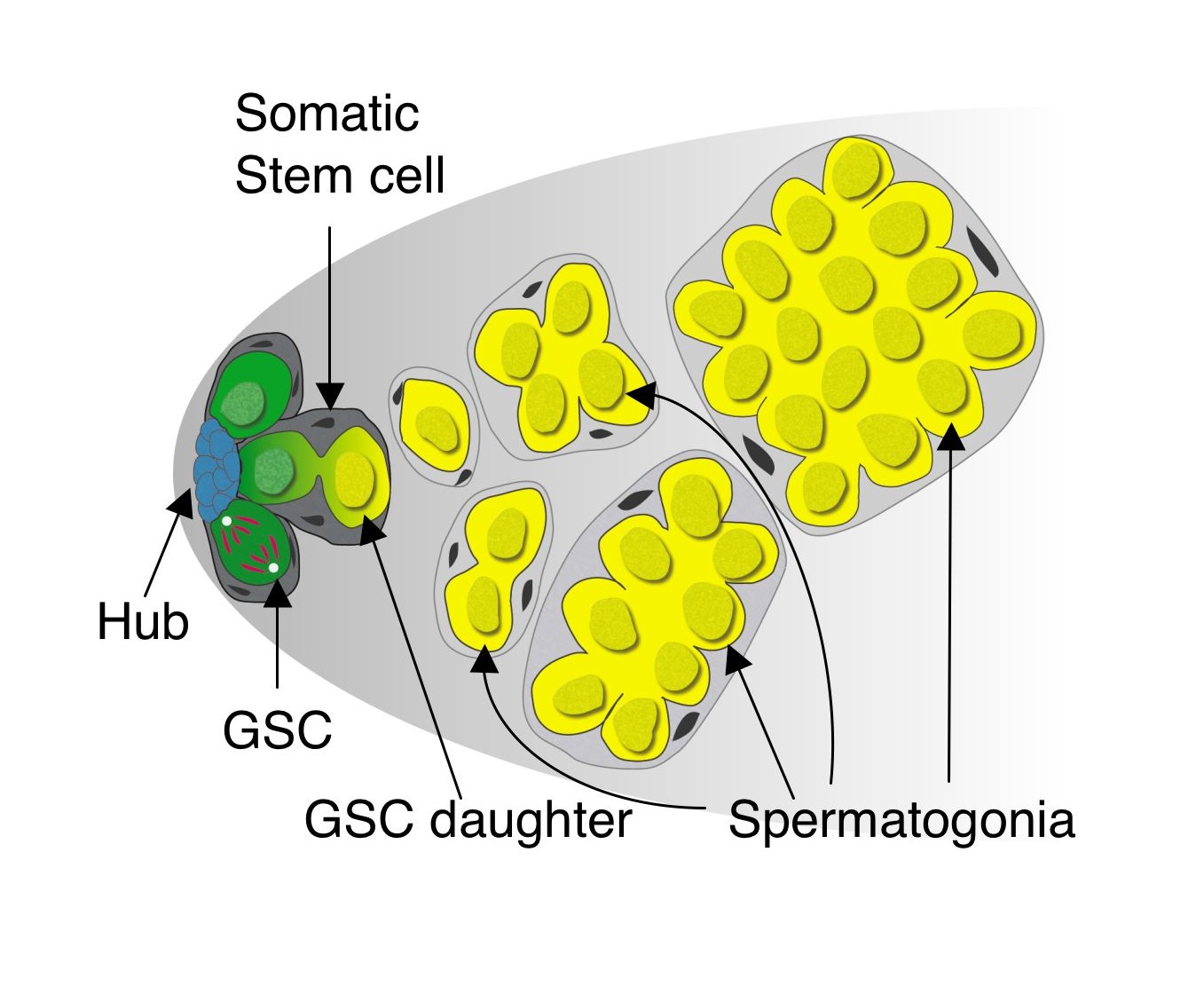 After running into similar issues as what Lucy Morris described in her previous post, we developed a live imaging protocol using either spinning-disk or 2-photon microscopy that enabled us to image stem cells within intact testes for up to 12 hours – about half of the GSC cell cycle.  By manually tracking individual stem cells and their daughter cells, we saw the most GSCs divide with a stereotypical spindle orientation perpendicular to the hub, thus displacing daughter cells out of the niche.  This phenomenon had been seen many times previously in immunostained, fixed testes and in testes studied by short-term live imaging, and had been the only observed mode of GSC divisions (Yamashita et al., 2003).  Surprisingly, in wild type young testes, we saw a few cases where GSCs, after first displacing their daughter cells away from hub, then swiveled such that the daughter cell gained and maintained contact with the hub until the end of imaging.  This suggested that GSCs can switch from their normal mode of division where one GSC and one daughter cell re produced, to one where two GSCs are produced.  We also saw the converse, where GSCs-daughter pairs lost contact with the hub and appeared to directly differentiate into a pair of spermatogonia.  Thus, our live imaging captured three different modes of division – asymmetric division, symmetric renewal, and symmetric differentiation – that occur simultaneously within a stem cell niche to balance its output during steady-state (click here to see a movie of this!).

By using the same imaging technique, we were able to look at cells undergoing the process of dedifferentiation, where a more differentiated cell reverts into a less differentiated cell or stem cell.  Our lab previously demonstrated that spermatogonia (transit-amplifying stem cell daughters) are able to revert into stem cells when they encounter a niche depleted of stem cells (Brawley and Matunis, 2004).  While examining dedifferentiation, we stumbled upon a scenario where we thought that the normally immobile spermatogonia were able to move towards the hub in order to gain physical contact with the hub before reverting into stem cells.  Whether the cells were gaining a migratory morphology during the process was unknown.  While we never attained a satisfactory answer to whether Drosophila spermatogonia gain intrinsic migratory properties, we saw many examples of spermatogonia initially not in contact with the hub gain (click here to see a movie of this).  The caveat is that we were not able to image the somatic cells within the niche, and these somatic cells could easily be shuttling the dedifferentiating spermatogonia in a manner similar to that of escort stem cells in the Drosophila ovary (Morris and Spradling, 2011).  We also noticed that the modes of GSC divisions changed greatly from that seen during steady-state (movie of this too!).  The balance of the different modes of stem cell division was now tipped to that of producing more GSCs in an effort to replenish the niche. 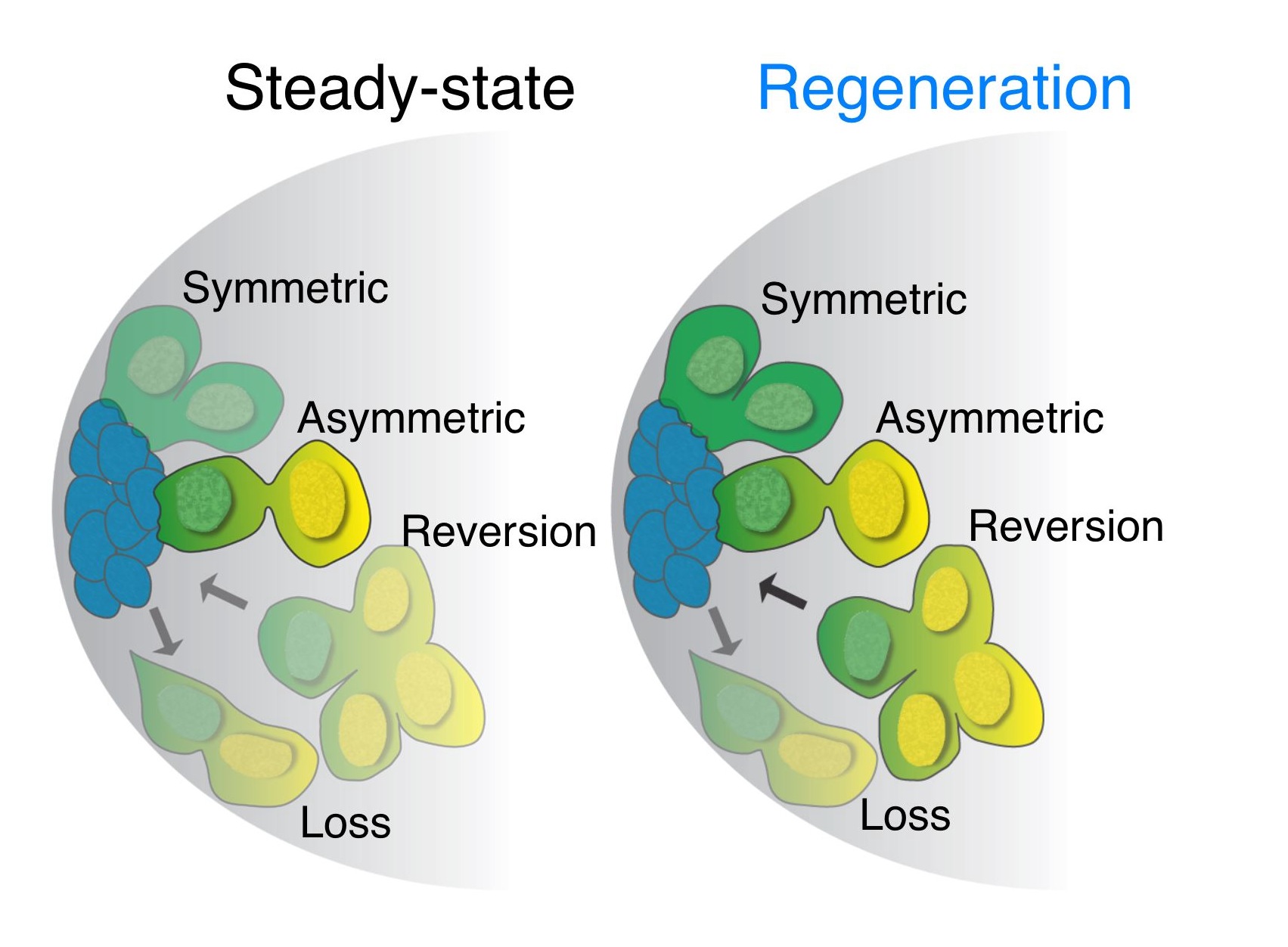 Our findings that stem cells are frequently replaced and regenerated in the Drosophila testis are in line with recent studies in mammalian tissues using lineage tracing and mathematical modeling of clone behavior.  These studies suggest that the classical stem cell definition of a long-lived, slow cycling cell may no longer be accurate.  While this view has yet to be challenged in the mammalian hematopoietic system, it has been demonstrated recently that mammalian gut, interfollicular epidermis, and testes all contain stem cells that not only undergo turnover on the scale of weeks, but also divide frequently (reviewed in Klein and Simmons, 2011).  I believe that more and more stem cell systems will be demonstrated to have these properties, and that diseases such as cancer may eventually be similarly modeled.

One thought on “Live imaging of stem cell maintenance, loss, and renewal in the Drosophila testis”