How can a genome’s cis-regulatory potential drive robust gene expression throughout embryonic development? Do topologically associating domains (TADs) truly contribute to gene expression by spatially constraining the regulatory actions of cis-sequences? And might phase separation by multi-valent proteins also be involved in the regulation of genes and genomic regions? The recent Company of Biologists Workshop on “Chromatin-based regulation of development”, organized by Benoit Bruneau (Gladstone Institutes, UCSF) and Joanna Wysocka (Stanford University), was the perfect playground to discuss important questions like these, and to stimulate interactions between early career and established scientists. Why was this Workshop so great to me (currently a postdoc in the lab of François Spitz, Institut Pasteur, France)? And why should you – a young investigator – apply to attend a future one?

Of course, my experience is strongly biased by my scientific interest: how does the three-dimensionality of the genome (actually: four-dimensions) contribute to the very tight regulation of embryonic development? In a nutshell, our genome is full of regulatory potential, important to ensure specific spatiotemporal gene expression during development. Enhancers – DNA sequences that harbor regulatory information – need to communicate their input to their target gene promoter. How exactly they do this is enigmatic, and probably there are many ways. In recent years, it has been shown that architectural proteins (CTCF and Cohesion are the most studied ones) are involved in regulating dynamic interactions that bring distant linear features into three-dimensional proximity, facilitating communication between two locations on one chromosome. These organized regions of linear DNA, which are controlled by interplay of the architectural proteins and which we observe at the cell-population level, are called TADs.

No doubt, some readers have already starting shaking their heads before finishing the first sentence of this mini-summary and, yes, the field is rich in a massive divergence in opinions and working models. But this emphasizes one important thing: the organizers picked an excellent theme for an intensive Workshop.

For the Workshop, which took place from 14 to 17 April, twenty speakers were invited by the organizers Benoit (who could not make it, unfortunately) and Joanna. The ten remaining seats were available for early-career scientists (PhD students, postdocs, young PIs) and were entirely funded by the Company of Biologists. I was among those young researchers that were thrilled to make their way to the grazed green hills of Sussex in southern England, to the location of the Workshop: Wiston House. The venue was truly amazing, and everything you can expect from a stylish English country manor house was there (except the wet roof tiles): a rich library, cozy wooden bar, heavy fauteuils, classical portraits of the former residents and a great conference room with a panorama overlooking the English lawns. Even an eerie ghost (‘The Grey Lady’) has been reported previously in the House – but I think that the lively discussions on TAD’s biological relevance scared her off this time.

The keyword of describing this Workshop would be – excusez-moi le mot – ‘balanced’. The mixture of young versus established researchers, biologists versus non-biologists, wet versus dry lab, the gender balance… you name it, everything was balanced. Even the after-lunch walks were ‘balancedly’ referred to as ‘Up the Downs’ (the ‘Downs’ are the high ‘dunes’ of the region, as the English Channel is close by). However, ‘balanced’ could also be used to describe the iterative discussions between furious prophets representing TAD-ology on the one hand, and talkative TAD-deniers on the other hand. Because, this was a very central question during the Workshop: do TADs matter biologically? Why are these structures conserved in cell types and throughout evolution, while just minor transcriptional effects are scored when these structures are removed upon – for instance – Cohesin depletion? It was great to see that many researchers at the Workshop are trying to answer this question, from all kinds of perspective and approaches (conditional depletions of architectural proteins, deletion of CTCF sites in the genome, genome-engineer TAD boundaries, or genome-wide analysis of reshuffled Drosophila chromosomes). Interestingly, this topic was also discussed intensively during the final evening’s pre-dinner debate, chaired by Wendy Bickmore (University of Edinburgh) and Eileen Furlong (EMBL Heidelberg). To be honest, my position (which would be something like: ‘TADs are extremely important in the regulation of developmental genes’) hasn’t been changed over the days of the Workshop– and I guess that most other fanatics haven’t changed side either. But it was definitely excellent to hear other opinions, to re-calibrate your own and to see where conflict between data and opinions arise.

Another exciting topic that was discussed during the debate was the potential of membrane-less compartments that behave as liquid droplets within the nucleus: phase-separated entities that potentially can enclose and isolate parts of the genome resulting in local rules of regulation. Does phase-separation enable gene regulation in a crowded nucleus? This part of the debate was excellently chaired by experts in the field, Mustafa Mir (UC Berkeley) and Geeta Narlikar (UCSF). Although – at the moment – it is hard to find a biological context in which a separated phase contributes to the silencing or activation of genes, this level of regulation (or this parallel mode of regulation?) is extremely interesting and clearly should be considered as a potential part of nature’s ‘gene regulatory toolkit’. Studying these structures forces us to include and develop approaches that are fully complementary to the current dominant DNA-based techniques (HiC, ATAC-seq…), and including phase-separation as a potential driver of gene expression strongly depends on the development of advanced microscopy and other types of experiments to examine these non-membranous bodies. How can these bodies disrupted, and how can we capture the DNA that can be trapped by them?

Apart from deep dives into naturally-evolved systems – TAD boundaries in mouse embryogenesis; histone reshuffling around Drosophila promoters; histone evolution in genetic conflicts; enhancers during motor neuron differentiation – several de novo systems were introduced in this Workshop that surely will bring us novel insights into how chromatin is read within a cell. For example, ‘synthetic embryos’ that are able to gastrulate have entered the field and provide a means to study early development. In addition, by making use of plant proteins it is now possible to induce forced ‘looping’ of cis-regulatory elements towards non-native promoter using blue light beams. Also very exciting is the possibility to re-write entire genomic loci of tens of kilobases, base by base, to study all the cis-regulatory treasures within.

Good meetings are – I think – defined by exciting cross-talk of fields, a good atmosphere to discuss and to debate, good social interactions, and of course excellent (unpublished) science. But, the Workshop provided more than this. Way more. The fact that all attendees presented their work and shared their data resulted in a very participative atmosphere – maybe younger generation scientists are more sensitive to this. It was also very stimulating that every participant was allotted a half hour of presentation and discussion, irrespective of their career phase. Interestingly, all sessions were chaired by young researchers – and this worked out perfectly: all chairs were fully respected by even the most loquacious senior scientists. During the breakfasts, lunches, coffee breaks, walks and excellent dinners (and at the bar, of course) not only science was discussed; what does it mean to be a scientist, or to choose to publish in certain journals? It was great to see that this group, a gathering of about 30 scientists across the field, was shaping definitions together, reflecting on data, making conclusions and identifying future directions. Science in progress, face-to-face, on a very intensive small scale but with big impact. And all this in the fantastic environment of the rustic English countryside, between the massive walls of Wiston House.

For me, as I will soon change labs and as I am trying to shape my future in science, this was a great opportunity to keep in contact with inspirational scientists, from all generations. The organizers Benoit and Joanna, together with Nicky Le Blond from the Company of Biologists, the staff of the incredible Wiston House and all participants, shaped the conditions for these incredible days. It was an extraordinary experience that I highly recommend for everyone. 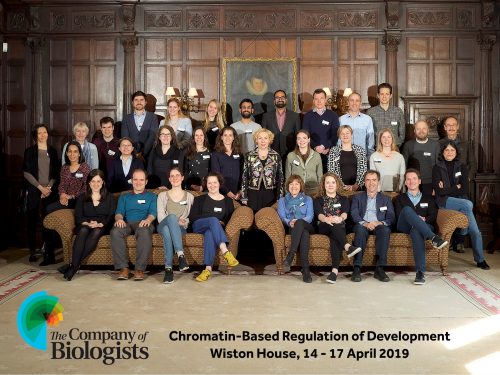 (Thanks to Seema Grewal for proof-reading this blog post)