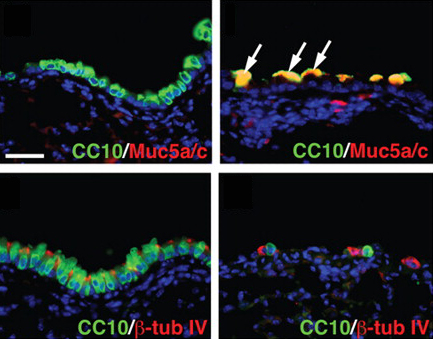 Mae West was no biologist when she told us all that “Too much of a good thing can be wonderful.”  I shudder to think how little development would take place if any one cell type was produced in large amounts.  Thankfully, stem cells and those involved in tissue regeneration understand the importance of moderation. Today’s image is from a recent Development paper showing how Fox1/4 proteins restrict certain cell fates in lung epithelium, both during development and tissue regeneration.

The epithelial layer in our lungs is made of several cell types, including secretory Clara cells, ciliated epithelial cells, neuroendocrine cells, and large goblet cells.  During irritation or injury, such as pollution or cigarette smoke, goblet cells increase the production of mucus.  Only a few goblet cells are typically found in healthy lungs, but asthma or COPD (chronic obstructive pulmonary disease) patients have an increased number of goblet cells.  A recent Development paper describes the role of the transcription factors Fox1 and Fox4 in regulating the cell fate decisions that produce goblet cells during development and tissue regeneration.  Specifically, Li and colleagues found that Fox1/4 restricted the goblet cell lineage program by repressing disulfide isomerase anterior gradient 2, Agr2.  In addition, Li and colleagues found that Fox1/4 deletion caused a catastrophic loss of tissue regeneration, by driving differentiation of all secretory cells into the goblet cell lineage program.  The images above show lung tissue after chemical injury by naphthalene, which causes a rapid loss of Clara secretory epithelial cells from the airways.  Control tissue (left column) regenerated by day 20.  Without Fox1/4 (right column), tissue regeneration was defective, as seen as the presence of too many goblet cells (top row, arrows) and the lack of ciliated epithelial cells (β tubulin IV in red, bottom row).