In the early ‘90s, the discovery of neural stem cells in the adult brain aroused hope to exploit these cells to treat neurodegenerative diseases or even induce brain regeneration. Yet, the real potential of these cells is still unclear. In the last 15 years we have learned that during development neural stem cells are an heterogeneous population of progenitors whose neurogenic potential is restricted by spatial and temporal patterning mechanisms. Many of these cells at the end of development stop producing neurons but begin to generate a closely related related cell type: the astrocytes. Interestingly, some of these astrocytes, derived from all the main domains of embryonic progenitors, continue to produce neurons throughout life, fueling not only our brain but also our regeneration dreams. Unfortunately however, the neurogenic potential of these neuronal progenitors is restricted to few neuronal types destined to the olfactory bulb and dentate gyrus, a drop in the sea of neuronal types that characterize the CNS. Yet, given that astrocytes are widely distributed in the adult brain, understanding if besides those located in the neurogenic niches other astrocytic populations may retain a neurogenic potential is a highly relevant issue. In the early studies on adult neurogenesis, all brain regions beyond the olfactory bulb and dentate gyrus were stigmatized as “non-neurogenic”. This concept derived from the observation that in mice and rats these regions do not show active neurogenesis and when transplanted with neural stem cells these cells differentiate only into glia.

More recently, comparative studies have shown that in other mammalian species, including humans, a low level of neurogenesis occurs also in “non-neurogenic regions” such as the striatum and to a lesser extent the neocortex. Most importantly, brain lesions un-hide such neurogenic activities also in laboratory rodents. In some cases the newborn neurons were proposed to be generated by local progenitors, and recently it has been shown that in the mice striatum after stroke these local progenitors are astrocytes (Magnusson et al., 2014). We also obtained similar results in an excitotoxic model of Huntington disease (Luzzati et al. under revision). The main problem of these findings is that the fate of the newborn neurons generated in “non-neurogenic regions” remains largely unknown, and the hypotheses regarding their possible function/s range from an attempt to brain repair to an aberrant phenomena. Indeed, in all models of neurogenesis in “non-neurogenic regions” newborn cells have a short life span and fail to express typical markers of the neuronal types that populate the regions in which they are generated. 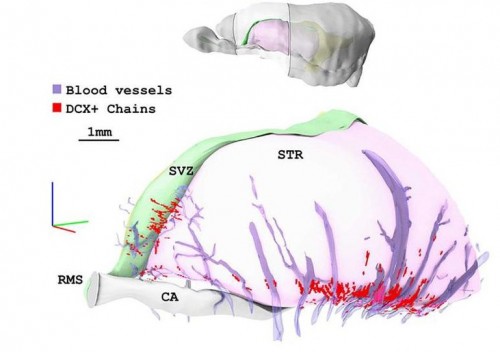 Lateral view of a 3D model obtained from coronal sections stained with the marker of immature neuroblasts DCX. The location of the reconstructed region is outlined in the upper model. Chains of DCX+ neuroblasts (red) are mostly restricted to the vPSB and in close contact with blood vessels (violet)

In this issue of Development (Luzzati et al. 2014) , we describe a new model of adult neurogenesis in the lateral striatum (LS) of the Guinea Pig that adds some important pieces to the puzzle. First, we show that the LS of the Guinea Pig contains neuronal progenitors, likely of astrocytic nature, that are quiescent at birth but become transiently activated around weaning. This observation challenges the classic idea that the mature brain parenchyma is not permissive for the activity of neuronal progenitors, and it is thus of great interest for stem cell research. At the same time, the more significant feature of a neuronal progenitor it is its cell fate potential. We thus followed the fate of new LS neurons with BrdU and lentiviral vectors and clearly established that these cells have a short life-span, and do not differentiate into striatal neurons nor express markers involved in their specification. Nonetheless, these cells acquire complex morphologies and we propose that they represent a novel cell type. Interestingly, new LS neuroblasts share several features with neuroblasts generated during striatal degeneration in mice, such as expression of Sp8, a tropism for white matter tracts, and a short life span. At least in the guinea pig, the transient nature of neuroblasts may be related to their transient production and strongly support a transient role in circuit remodeling. Future studies should clarify if these cells actually represent a new player for brain plasticity. Moreover, it would be also interesting to understand if this form of plasticity is present also in other mammals, including humans, and if it plays any role after lesion. A comparative framework will be essential to answer these questions.

One thought on “Neurogenesis in “non-neurogenic” regions”