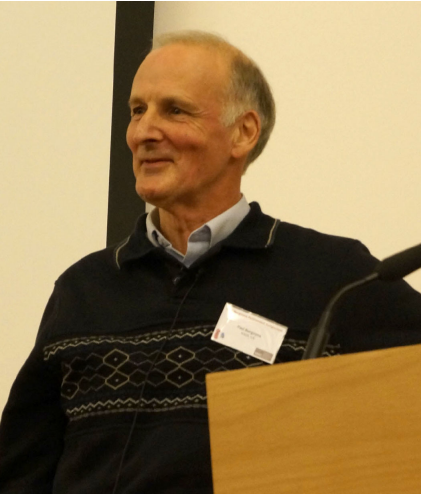 Paul Burgoyne was an outstanding mouse geneticist and developmental biologist who made fundamental discoveries about the sex chromosomes and their biology. He was born on 10th January 1946, spending most of his childhood living in Dartmoor on a farm with his parents, who were Quakers. The farm was a busy and culturally diverse environment, co-run by a second family (the Haines) and providing residence to foreign students who visited through the International Scholastic Correspondence, an organisation that brought together youngsters from different countries to foster better understanding in the post-war period. Paul considered several academic and non-academic career options, including a farmer, a vet and, at one point, a pilot; the last option he eventually rejected due to a tendency for airsickness. Encouraged by his parents and teachers, he continued to higher education, studying botany and zoology at Portsmouth University. His meticulous and precise approach to science was noted by his college tutor, who persuaded him to take up a technician position at Edinburgh University with Alan Beatty, reproductive biologist and PhD supervisor to the Nobel Prize winner and ‘test-tube baby’ pioneer Robert Edwards. Paul remained in the Beatty lab for his PhD, working on sperm morphology. He loved playing cards, and regularly attended the lunchtime whist club. It was there that he met his beloved wife Kathy, a computer scientist who later helped him analyse his cytological data.

In 1973, Paul moved with Kathy to the USA, where he did a postdoc with John Biggers at Harvard University. During this time, Paul’s interest in sex chromosomes was first piqued, when he discovered that female embryos lacking one X chromosome exhibit impaired development in vitro. Among the highlights of this 3 year stay in the USA was a summer placement at the Jackson labs, where he worked with Wes Whitten, discoverer of the Whitten effect (that male pheromones can stimulate simultaneous oestrus in females), and enjoyed afternoons swimming in the lake. Paul subsequently returned to Edinburgh University to work with Ted Baker, during which period he demonstrated that two X chromosomes are necessary for the development of eggs. He was subsequently invited by eminent developmental biologist Dame Anne McLaren in 1979 to the newly formed MRC Mammalian Development Unit in London. Anne was a huge influence on Paul and was a personal and scientific role model for him. But Anne was equally devoted to Paul; she was delighted when he came to her unit and with the research he did there, and was equally excited about his accomplishments after this.

During his period at the MRC Mammalian Development Unit, and later when he moved (in 1992) to the MRC National Institute for Medical Research in London, Paul made discoveries in sex chromosome biology that have become memorialised in textbooks. He dominated the field of mouse Y chromosome biology, using a diverse array of mouse mutants carrying what he referred to as ‘weird sex chromosomes’ to dissect the function of Y genes in fertility. He was fascinated by meiosis, the point in germ cell development when homologous chromosomes pair and form crossovers. He correctly predicted that the X and Y chromosomes, thought initially to be genetically dissimilar, shared a region of homology through which they exchange genetic information. He named this the ‘pseudoautosomal region’ (PAR), and demonstrated that defective genetic exchange in the PAR was the principle cause of infertility in male mice with abnormal sex chromosomes. His group demonstrated that DNA double-strand breaks, the substrates of genetic exchange, are formed much earlier in meiosis than previously believed, and discovered a novel epigenetic phenomenon, meiotic silencing, in which chromosomes failing to pair are transcriptionally silenced. These studies, marvelled at for their beautiful cytology, revealed to us the intricate surveillance mechanisms that operate in the germ line to ensure that offspring inherit the correct number of chromosomes. Throughout his life, Paul was deeply concerned about overpopulation, and the irony that he worked on infertility was not lost on himself or his friends!

Paul’s love of sex chromosomes also led him beyond reproductive biology, and in a series of papers, most of them published in his favourite journal Development, he made landmark discoveries in sex determination, embryology and sex differences. He found that in chimeric XX-XY mice, most testis cell types could be either XX or XY, but Sertoli cells were exclusively XY. This elegant experiment revealed that the testis-determining factor, not yet identified by the Lovell-Badge and Goodfellow labs as Sry, acted cell-autonomously in Sertoli cell precursors. This became an important criterion to reject or pursue candidates for the gene. He showed that sex chromosomes control the rate of embryonic growth, with a Y chromosome speeding up and a paternal X chromosome slowing down development of the preimplantation mouse embryo. With Art Arnold and Robin Lovell-Badge, he designed and validated a method called the ‘four-core genotypes cross’ that allowed the effects of sex chromosome make-up and gonadal hormones to be uncoupled. Before this point, the impact of sex chromosomes on male-female differences was underappreciated, and it wasn’t until 2014 that the National Institutes of Health mandated the use of both male and females in research studies on animals. The four-core genotypes cross is now a mainstay of research across the globe, revealing how sex chromosomes impact diverse diseases, including autoimmunity, metabolic syndrome, Alzheimer’s and hypertension.

Paul maintained a small research group and was hands-on with respect to science, especially mouse work. He expected to find his trainees in the mouse rooms, peering into cages so that they wouldn’t miss phenotypes. He made twice-weekly visits to the animal house, where he spent the entire afternoon meticulously assessing each of the 70 or so sex-chromosome variant mouse lines. His desire to work on a farm, in close contact with animals, may have motivated this close connection with his mice. Even during a 10-year period when he had become very allergic to mice, he would still trot off to the animal room, looking like an astronaut, with a full face mask and HEPA-filtered air supply. It was during his mouse-room visits that his enthusiasm and genetics prowess were most evident. He would recite complex genetic crosses effortlessly, regaling those shadowing him with witty anecdotes from his life as a trainee. His karyotype preparations were always more beautiful than everyone else’s, and he took great relaxation from sitting in his office, counting chromosomes on his Olympus microscope, a cup of tea by his side and classical music on the radio. He was utterly captivating during scientific presentations, leaving even the most learned geneticists in awe.

Paul was a guileless and modest man who never realised how brilliant or deified he was. He preferred instead to focus on the success of his junior scientists, many of whom now run research groups. He was elected to the Academy of Medical Sciences, but otherwise eschewed formal recognition. To him, research was simply another of his many hobbies, like gardening, hiking, DIY and badminton, all of which he was enviably good at.

Paul is survived by his wife Kathy, daughter Jacqueline, and sons Robert and Thomas.

We are grateful to Kathy Burgoyne and Paul’s scientific colleagues for sharing information on which this obituary is based.