The asymmetry in cell morphology and the asymmetric distribution of intracellular organelles, proteins, nucleic acids and other components are the hallmarks of cellular polarity, possessed by most, if not all, cells. Polarity plays important roles in cell differentiation and function, and its dysregulation is intimately related to developmental defects, tumor formation and cancer metastasis. The commonality of cell polarization events is that some polarity-regulating proteins (such as the Par3/Par6/aPKC complex, or the Frizzled/Dishevelled/Diego complex) are specifically recruited to the designated subcellular area and form local aggregates, attaching to the inner surface of the plasma membrane. These protein aggregates are dynamic and assemble and disassemble quickly in response to cellular signals [1-3]. How these protein complexes can achieve polarized concentration on the premise of open contact with the cytoplasm while maintaining a high degree of dynamics has been an open question.

In recent years, the “liquid-liquid phase separation” (LLPS) of biomacromolecules has emerged as an important mechanism underlying the formation of a variety of membraneless structures within cells [4,5]. The aggregates of polarity proteins share some similar characteristics with these membraneless structures, such as high condensation and dynamic equilibrium with proteins in cytoplasm.

We showed previously that during the asymmetric divisions of Drosophila larval neural stem cells (or neuroblasts), cell fate determinants including Numb and Pon undergo LLPS. Multivalent interactions lead to the polarized enrichment of the Numb/Pon complex on the basal cortex of dividing neuroblasts, which regulates the differentiation of the ganglion mother cell (GMC), the differentiating daughter of the neuroblast, upon cell cycle exit [6].

On May 8, 2020, we published a research work titled “Par complex cluster formation mediated by phase separation” online in Nature Communications [7]. The paper provides evidence showing that the apical Par protein complex is also assembled via a LLPS mechanism, thereby regulating the establishment of the neuroblast apical-basal polarity and consequently the distinct cell fate of neuroblast daughters.

One of the best-studied polarity complexes, the highly conserved Par complex is composed of Par3 (Bazooka in Drosophila), Par6 and aPKC, which can interact with each other to form a polarity core and further recruit other polarity proteins. During the interphase of neuroblasts, these polarity proteins are distributed throughout the cytoplasm. Upon mitotic entry, Par3, Par6 and aPKC gradually accumulate underneath the apical cortex and form a multiprotein-containing apical complex, which directs the basal enrichment of those cell fate determinants including the Mira/Pros/Brat/pros mRNA complex and the Pon/Numb complex, via aPKC-mediated phosphorylation events. Upon the completion of mitotic cycle, the Par3/Par6/aPKC complex remains in the neuroblast daughter and the complex is dissembled, whilst those cell fate determinants are preferentially segregated into the GMC daughter to promote its differentiation. In this latest work, we showed upon mitotic entry Par3 (or Baz) forms apically-localized liquid droplets, which is mediated by its N-terminal domain (NTD) harboring oligomerization activity. These liquid droplets subsequently fuse and assemble into a highly concentrated cluster around the apical pole, forming the condensates underneath the apical cortex. Par6 is recruited to the Par3 condensate through the specific binding of its C-terminal motif to PDZ3 domain of Par3. Interestingly, the incorporation of Par6 into Par3 condensates greatly promotes the LLPS of Par3 via multivalent interactions.

As the only known kinase in the complex, aPKC can also be recruited and enriched in the Par3/Par6 condensates, but aPKC in the droplets is surprisingly in an inactive state. Interestingly, activated aPKC can phosphorylate Par3 and promote dissolve of the Par3/Par6 aggregates. Based on these observations, we speculate that the formation of the Par condensed droplets may provide an effective platform to recruit and concentrate the limited aPKC from the cytoplasm to the apical sub-membrane area, where aPKC can be activated by cell cycle regulatory factors (such as Cdc42) upon mitotic entry, and subsequently phosphorylate Par3, which eventually leads to the dissembly of the Par protein aggregates. Meanwhile, the activated aPKC also mediates the basal segregation of the fate determinants through its kinase activity. Interfering with the formation of Par3/Par6 LLPS will disrupt the establishment of the apical-basal polarity during the asymmetric divisions of Drosophila neuroblasts, leading to the defects in the development of neuronal lineages (Figure 1). This study, together with our previous work, shows that the LLPS, mediated by the multivalent interactions among these polarity proteins, plays important roles during the establishment of Drosophila neuroblast polarity.

Although LLPS provides a new perspective for the formation of a large number of membraneless structures in cells and the selective enrichment and separation of cellular components in various physiological processes, whether it regulates these biological processes under physiological conditions has always been the focus of debate. One main reason is that LLPS is largely dependent on the protein concentration, and the concentration of the target protein used in cell overexpression systems and in vitro experiments is often higher than that under the physiological conditions.

To test this, we established GFP knock-in Drosophila strains expressing GFP-tagged Baz under its endogenous regulatory elements, and explored the role of LLPS (of Baz) in the establishment of neuroblast polarity at an endogenous setting. In sharp contrast to the overexpression assay results showing that Baz ΔNTD (deleting the N-terminal domain, thus compromising LLPS ability) lost its apical condensation in both WT and baz mutant backgrounds, the knock-in mutant Baz ΔNTD surprisingly exhibited obvious apical condensation (crescent formation). However, it also exhibited significant cytoplasmic diffusion, which likely explains the observed smaller brain phenotype. More importantly, replacing the Baz NTD domain with a low complexity domain (LCD)-containing fragment of FUS, which has no secondary structure but can phase separate, also significantly rescued brain development abnormalities caused by NTD deletion (Figure 1). These results provide strong support for the hypothesis that the polarized distribution and establishment of the Par complex is mediated by LLPS, and also points out the importance of protein concentration when assessing the LLPS for protein of interest. It further suggests that the results obtained form in vitro or over-expression study need to be interpreted with caution.

In summary, our study reveals that the LLPS mediated by the multivalent interactions among the polarity proteins Par3, Par6 and aPKC promotes their condensation beneath the apical membrane, and the rapid response of the phase-separated condensates to cellular signals also ensures a high dynamics in the assembly and disassembly of cellular polarity. Since most polarity complexes contain multidomain proteins able to form condensed puncta, and these puncta are in dynamic equilibrium with proteins in cytoplasm, the LLPS proposed in this study may be a general mechanism for the establishment of cellular polarity. 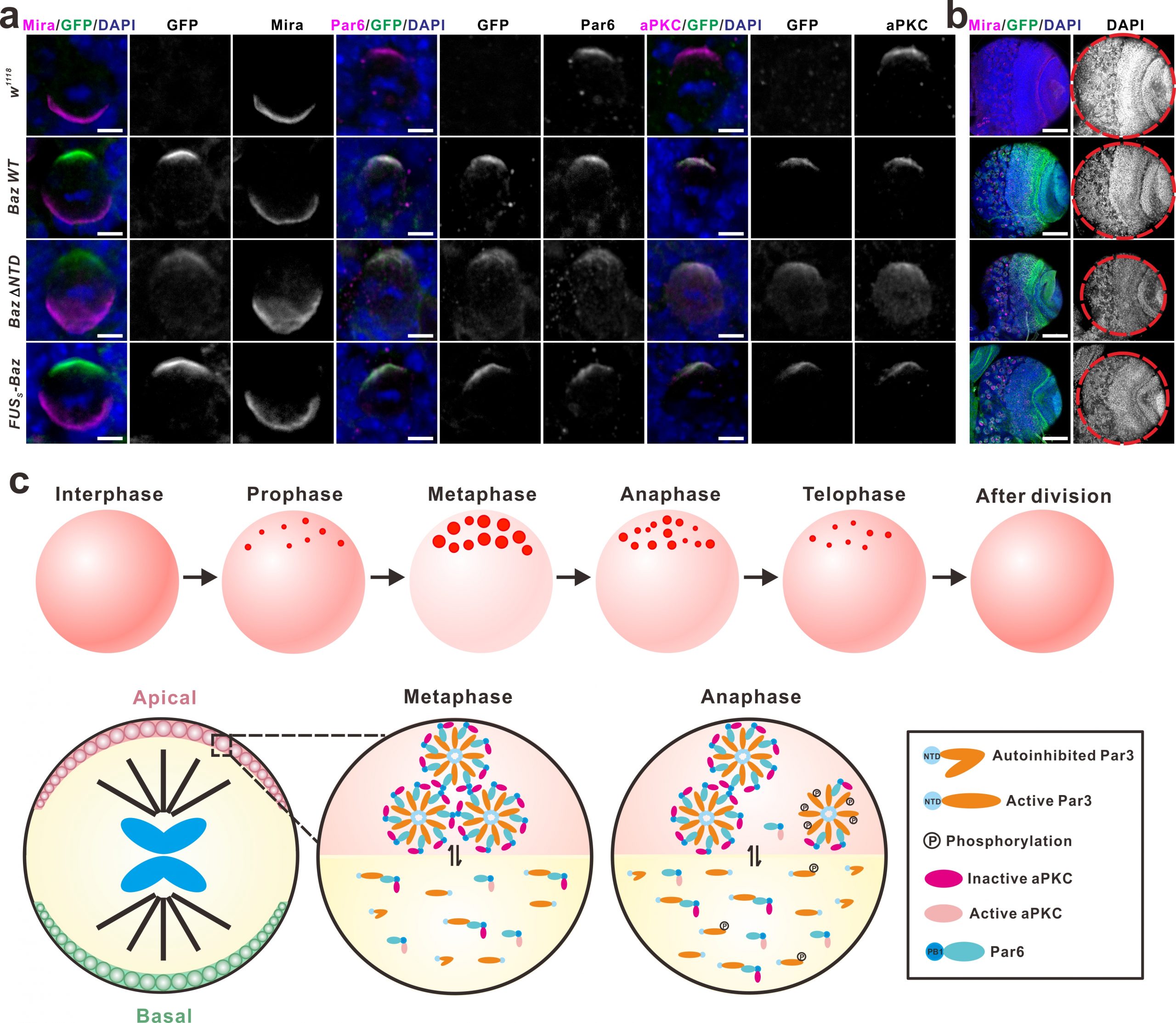