Earlier this week, I took part in a workshop on preprints – organised by Alfonso Martinez-Arias and held in Cambridge, UK. Inspired by the ASAPbio movement in the States, Alfonso felt it would be useful to bring discussion of the potential value of preprints more to the forefront in the UK. Happily, he was able to get John Inglis, co-founder of bioRxiv (the primary preprint server for the life sciences), to speak at this event, and also invited several other speakers  – including myself – to talk about their experiences with preprint servers.

If you’re interested, the whole event was live-streamed, and you can watch the video here.  But for those (understandably!) not wanting to spend 3 hours listening to people talk about preprints, here’s a (not-so-brief) summary. Or check out #pptsCamOA for the live tweeting.

If you’re not familiar with bioRxiv or preprints more generally, I’d definitely encourage you to watch John’s talk at the beginning of the video (starting around 7 minutes) – he gave a great overview of the history of bioRxiv and its potential future. One thing I find interesting is why it appears that bioRxiv is succeeding while previous efforts – most notably Nature Precedings – failed (see graph below). Presumably this is primarily because bioRxiv got its timing right: we’re in a period of changing culture with respect to science publishing, and bioRxiv is riding a wave of discontent with traditional publishing systems. Perhaps Nature Precedings just came too early, but perhaps also people have been more willing to rally behind a not-for-profit enterprise not directly linked with a publishing house (bioRxiv is supported by Cold Spring Harbor Labs not by the Press). 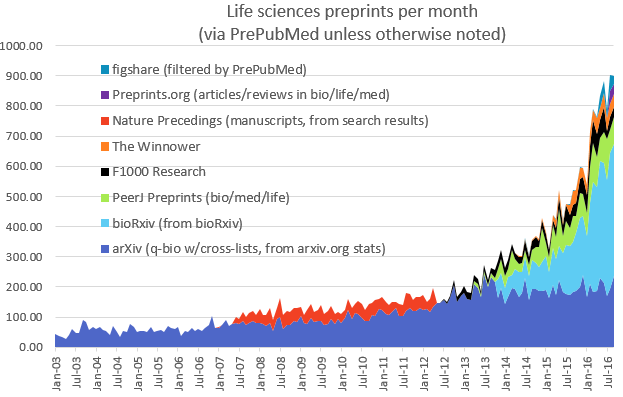 As you can see from the graph, bioRxiv is expanding rapidly (now with around 450 deposits and over 1 million article accesses per month), and it’s clear to me that preprints are here to stay – though there are still a number of important challenges to address (check out the video from around 32 minutes to see where bioRxiv is going).

That preprints are becoming increasingly mainstream is also reflected in the fact that most journals are now happy to consider papers that have been posted on preprint servers – including Cell Press, who were initially and somewhat notoriously reluctant to make a clear statement on that front. Two representatives from the publishing industry talked about their attitudes to preprints – me (representing Development and The Company of Biologists) and Mark Patterson from eLife. Mark identified three reasons why eLife supports preprints: that ‘journals shouldn’t get in the way’ of what scientists want to do, that ‘journals and preprints complement each other’ and, somewhat enigmatically, that ‘new possibilities arise’. Here, Mark introduced the audience to a concept that most of the audience (myself included!) weren’t familiar with – a preprint-overlay journal. Exemplified by the maths journal Discrete Analysis, the idea here is that the journal is built on top of the preprint server, with the server (in this case arXiv) hosting the content, and the journal providing the peer review element. Later on in the workshop, Aylwyn Scally returned to this idea as his vision for how academic publishing might work in future, and it’s certainly an interesting idea…

Unlike eLife and its somewhat revolutionary ethos, The Company of Biologists is a much older and more traditional publishing enterprise, and it has taken us some time to embrace preprint servers, with each journal changing policy at different times according to feedback from its community – as shown in the excerpt from one of my slides below (I make an appearance at 56 minutes on the video). While it’s only recently that all our journals have supported preprint deposition, we’re now fully on board, and will shortly be fully integrated with bioRxiv for simple bidirectional transfer between journal and preprint server.

J2B portal is the system allowing simple transfer from the journal submission site to bioRxiv for immediate posting; B2J is the reverse portal whereby authors uploading a file to bioRxiv can easily submit to an integrated journal.

The final speaker for the first session was Hannah Hope from the Wellcome Trust. Given that preprints allow you to get your research out to the community earlier, but that that research is not yet peer-reviewed, funding agencies have to decide whether or not to ‘count’ preprints when assessing someone’s productivity for grant or fellowship applications. The Wellcome Trust has taken a forward-looking approach to this and supports the use of preprints in applications and end-of-grant review. They’re also working with other funders to develop a common set of principles – which should be made public soon. This is great news for researchers who need to apply for a grant before their paper is formally published but who want to demonstrate that they have a good track record in their field, and hopefully will become common practice among funders!

In addition to hearing the voices of publishers and funders, Alfonso had invited several preprint users to talk about their experiences. Raymond Goldstein, an interdisciplinary PI whose work spans the physics-biology divide (and includes IgNobel prize winning work on the shape of a ponytail!), gave us the viewpoint of someone for whom posting on arXiv has been common practice for decades and for whom the surrounding angst that many biologists feel is alien. He pointed out that, with LaTeX-based formatting tools, one can generate a beautifully formatted version of the manuscript to submit to a preprint server – common practice in the physical sciences, but with most biologists still married to Microsoft Word, isn’t something we’re yet comfortable with. Raymond also raised an important question about discoverability of preprints and argued that it might make more sense to have a central server to hold everything in one place, rather than multiple outlets for preprints.

Steve Royle told us ‘how and why I became a preprinter’ – explaining that his frustration with the amount of time it takes to get a paper published (see his blog post for some fascinating stats on this – it can be quicker to produce a baby than a paper!) induced him to start depositing preprints. As paraphrased by Richard Sever on twitter, Steve said that ‘preprints bring the joy back during the soul-destroying wait for journal publication’.  Aylwyn Scally highlighted his concerns about how the peer review system works (what credit do referees get for the work they put in?) and how he feels preprints can help change the system. Sudhakaran Prabakaran‘s unusual career path – spending time as an editor at AAAS before returning to academia to set up his own lab – has given him a unique viewpoint on academic publishing. His main point was that review takes too long (mainly because reviewers take too long!), and that preprints therefore provide a possibility to get your work out more quickly, and to take advantage of altmetrics to get your work known in the community. Finally, Brian Hendrich took to the stage to explain why he felt compelled to post a preprint to alert readers to potential problems with a published paper (something that Steve Royle also mentioned), and why he then didn’t feel the need to get that preprint formally published elsewhere.

In addition to the talks, there was a lot of discussion surrounding why preprints are useful and where we are going with them. It was great to hear some of the early career scientists express their opinions – mainly but not exclusively positive – about preprints. One expressed concern about putting her work out on a preprint server without the ‘sanity check’ of peer review, while another explained how he felt his preprint helped him get his Henry Dale Fellowship. Discussion also centred around the degree to which preprint posting can claim precedence for an idea or a set of data (though without firm conclusion!), and to what extent peer review can claim to ‘validate’ a scientific paper. In general, I found it a hugely constructive discussion, and I came away feeling positive about how preprints and journals do and can integrate to allow researchers to better disseminate their research.

At the end of my talk, I posed a bunch of questions that I hoped would provoke discussion among the audience, and I’d also be really interested to hear people’s feedback here, so please feel free to comment on any of these below!