When your model organism of choice is medaka, and you spend your mornings trying to rid your embryos of their tough chorion, you comfort yourself thinking that one day all the hard work will result in A) a paper, and/or, B) a visit to Japan. After all, medaka are Japanese killifish (Oryzias latipes). When the day in which one of these two options unexpectedly becomes true, you realise that medaka is truly the best model organism anybody could work on!

And so it was that a few weeks ago, I got an email from the RIKEN Centre for Developmental Biology in Kobe telling me I had a full travel grant to attend their 2013 Symposium, entitled “The Making of a Vertebrate”, and which would take place in March. The list of speakers was impressive, and the theme selected for this year’s meeting was particularly exciting. Our lab here in Seville works on vertebrate morphogenesis (Juan Martínez-Morales’ lab, at the Andalusian Centre for Developmental Biology) and the Symposium felt like the ideal place to tell our medaka-themed story.

At breakfast on the first day of the Symposium I met the other four lucky people who had also been awarded travel grants. We all came from different corners of the world, and none of us were working in our own countries. We bonded through our nomadic dispositions that morning, visiting each other’s posters in the afternoon, and by the time the sushi was served during the reception dinner that evening, we were plotting the conquest of Kobe.

The Symposium itself had a great start. The first session took on the origins of vertebrates, with a comprehensive overview by Nicholas Holland, asking what the true shape of the “tree of animal life” is.  His introduction was followed by talks on the hourglass model (Naoki Irie) and the evolution of chordates (Billie Swalla), both of which shed light on the question initially proposed by Dr. Holland. Next were the talks on hemichordates, annelids and the ancestry of vertebrates and their body plan. Detlev Arendt showed there is a conserved set of transcription factors, expressed in a specific, serial pattern in cnidarian gastric pouches, coelomic cavities in amphioxus, as well as in annelid mesodermal segments; suggesting that segmentation evolved before the split between cnidarians and bilateria. The final session of the day addressed the origins of pluripotency in vertebrates and its associated transcription factor network, which contains functionally overlapping genes that provide robustness to the network (Hitoshi Niwa) but has also evolved by gene co-option and duplication (Miguel Manzanares). The speakers were all engaging, the discussions insightful, and the organization of the whole day was great, including the best conference food I have ever tasted, which was also beautiful to look at: bento boxes.

Day two began with a fresh look on gastrulation, and I particularly enjoyed Masahiko Hibi’s images showing the timing of dorsal determinant transportation in the zebrafish yolk, and Hidehiko Inomata’s talk explaining how dorsoventral patterning is adjusted to the size of the embryonic axis. The afternoon’s subject was the Genetic Control of Morphogenesis, and included a talk on medaka (Hiroyuki Takeda), so that made it particularly thrilling for me. Dr. Takeda  is using a genome-wide approach to study epigenetic marks on key developmental genes, and finds their DNA-methylation status, as well as their histone modification states, change dramatically in time; suggesting that gene regulation occurs in “steps”.

The last day of the Symposium was all about vertebrate characters and their origins. It began, to my delight, with talk of dinosaurs and beautiful pictures of in situs on penguin embryos, with a compelling argument for the use of chick embryos as models for dinosaur morphogenesis (Koji Tamura). David Kingsley uses sticklebacks to address evolutionary changes, and suggested that evolution has few ways to achieve change, but uses them repeatedly: regulatory mutations, unlike deleterious loss-of-function ones, can be both advantageous and dramatic. The talk by Shigeru Kuratani discussed his lab’s work to clarify the patterning of craniofacial structures. They have successfully bred hagfish and have studied their embryology in minute detail, concluding that there is a “pan-cyclostome embryonic pattern” which is the ancestral programme of craniofacial development of vertebrates, and during evolution gnathostomes have lost or modified components of this pattern. I have mentioned my personal highlights, but would like to state that in general, the speakers were fantastic and it was hard to select only a few for this piece.

After the meeting was over, I made a short trip to Kyoto to see the sights. I am sharing some of the pictures I took during my visit, hoping that those of you who haven’t experienced Japan yet can have a peek at how magical it is. I hope you enjoy them.

Thank you very much indeed (domo arigato gozaimasu) to RIKEN CDB for the travel grant, and for an excellent and memorable meeting.

Finally, now that option B on my list became true, I better get on with making option A (the paper) happen too…our dear medaka are certainly doing their part! 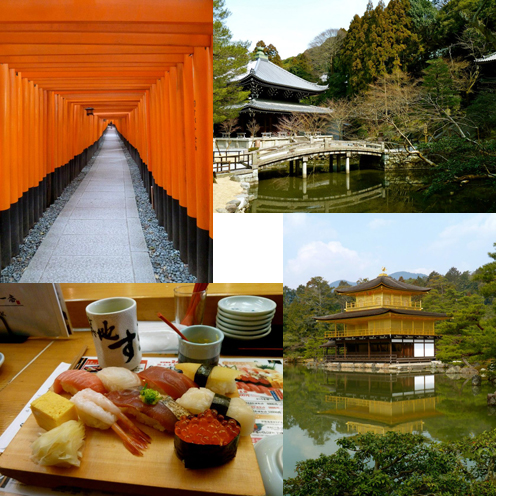