Satellite cells are muscle stem cells that regenerate injured muscle (remember this earlier post?).  They are highly motile cells that may be able to travel in order to repair injured muscle far away, and a recent paper in Development describes the role of Eph/ephrin signaling in satellite cell motility and patterning. 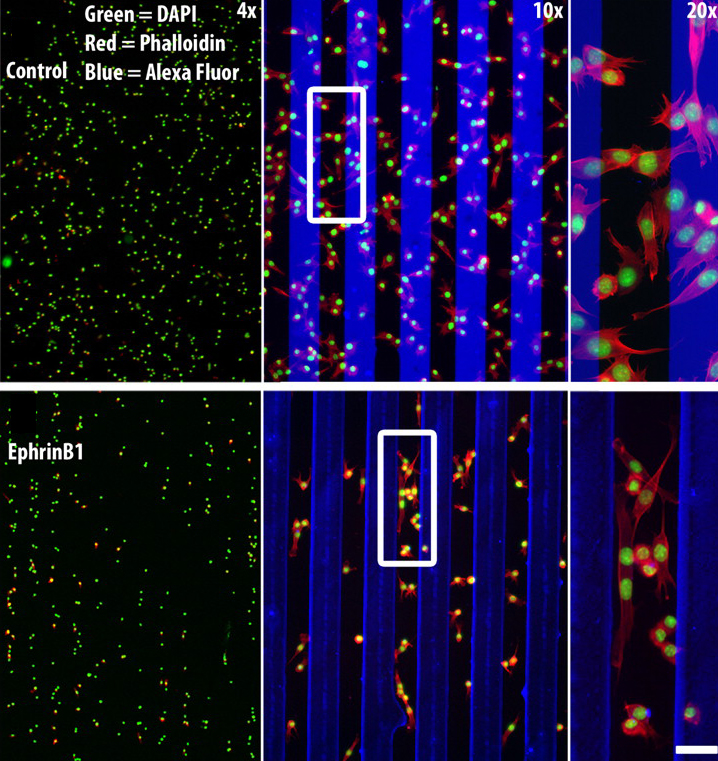 One of the most well-understood guidance pathways is the Eph/ephrin pathway, which has major roles in cell migration and axon guidance throughout development.  In this pathway, Eph receptors on one cell interact with ephrin ligands bound to another cell’s membrane.  This interaction typically causes rapid changes in the Eph-expressing cell’s adhesion and cytoskeletal organization, and frequently causes the cells to repel each other.  A recent paper describes the role of Eph/ephrin signaling in satellite cell motility and patterning.  Stark and colleagues showed that ephrin ligands are differentially localized to healthy and regenerating muscle tissue, and used a well-established “stripe assay” to show that ephrins can repel mouse satellite cells.  As seen in the images above (increasing magnification from left to right), stripes of ephrin-B1 ligand (bottom row, blue stripes) repulsed the satellite cells, compared to the distribution of cells on control stripes (top row).  In addition, Stark and colleagues explanted mouse satellite cells into the hindbrain of developing quail embryos, from which neural crest cells emigrate using Eph/ephrin signaling.  Some satellite cells migrated along with the neural crest cells and conformed to the same boundaries.