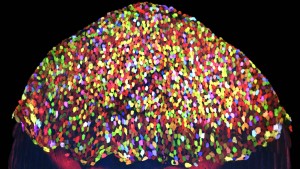 Why some vertebrates like salamanders and zebrafish are able to regenerate complex tissues while humans cannot is a question that has fascinated biologists for centuries. Understanding how and why regeneration occurs in these animals can inspire novel treatment strategies for regenerative medicine. At the cellular level, the regeneration process is driven by dynamic activities of cell migration, cell proliferation, and cell assimilation between old and new tissues. All of these events must be orchestrated in a precise order and at appropriate locations along the proximal-distal axis in order to restore a flawless, complex tissue (e.g. limbs or fins) from an amputation stump. With current imaging tools and platforms, it remains challenging to capture these dynamic, intricate cell behaviors in regenerating tissues from live adult vertebrates.

In 2012, my colleague in Dr. Ken Poss’s laboratory at Duke University, Vikas Gupta, had just successfully applied the “Brainbow” technique to the zebrafish heart to study cell behaviors during heart development and regeneration (Gupta and Poss, 2012). Since its debut in 2007, this elegant, multicolor cell labeling technique was mostly used to untangle the neuronal circuits in the brain (Livet et al., 2007). Vikas’s study demonstrated that this technique can also be applied to cell types other than nerve cells. At the time, biology aside, I was amazed by the beauty of the images he captured and started to wonder how I can apply this technique to fins, the tissue I study. The idea was that by tagging cells with diverse colors using the Brainbow cassette, I would be able to retrospectively determine contributions of distinctly labeled cells and their progeny in regenerating tissues, a key mechanistic question in understanding appendage regeneration. In addition, because fins are external, flat, and optically translucent, I might be able to uncover novel cell dynamics during regeneration by following these bar-coded cells in live animals. To label most cell types in fin tissue, I naively employed the ubiquitin promoter to drive the expression of Cre recombinase, while using the beta-actin2 promoter to drive the Brainbow cassette. To impose precise temporal control of Cre activity, I constructed a dual-inducible system that combines both the Tet-on system and an inducible Cre (CreERT2) in the transgene. The activity of Cre recombinase would require exogenous addition of both Doxycycline and Tamoxifen, limiting the possibility of leaky recombination. Such transgene design appeared to work nicely in injected, mosaic embryos.

Several months later when I began to screen through transgenic founders, I was at first disappointed to find that leaky recombination still occurred in many lines, and the expression domain of the Brainbow cassette was quite variable. However, I also noticed that progeny from one particular founder consistently displayed an unexpected, dazzling pattern (Figure 1) that was restricted to the outermost layer of the skin. Amazed by diverse hues displayed in this stable transgenic line, I assessed color stability of these labeled, post-mitotic cells by time-lapse imaging. Much to my surprise, multicolor tagging on this population of epithelial cells was rather stable, making tracing these cells over long time periods possible. Ken and I began to see that this “skin-bow” line may serve as a tool to study cell dynamics during skin turnover and regeneration. With hopes of tracing hundreds of cells in a large field of view, we were very fortunate to team up with two terrific quantitative biologists: Stefano Di Talia, who at the time just had established his laboratory at Duke, and Alberto Puliafito, a postdoctoral scientist in Luca Primo’s group in Italy to tackle this challenge. Alberto developed customized algorithms to segment our images, quantify and transform diverse cell behaviors that we just had a glimpse into compelling numbers.

With the skinbow system, we showed that regeneration of skin can be dissected into the most basic building block (i.e. cells), and each cell can be accurately monitored at the population level as regeneration takes place (Chen et al., 2016). Our findings identified diverse cell behaviors in response to different injuries that we would not have anticipated or discovered in fixed samples (click on video link below). The skinbow system provides a quantitative readout for studying these cell behaviors and their underlying mechanisms, many of which may be perturbed in aging, infected, or malignant skin tissues. As a proof of concept, we demonstrated that skinbow can be coupled with other transgenic lines to study cell-cell interactions during epithelial regeneration, or be employed as a screening platform to uncover molecular influences on certain cell behaviors. Among many future directions, I and others in the field are positioned to apply similar approaches (i.e. combination of cell barcoding, live imaging, and quantitative analysis) to illuminate activities of basal epithelial cells, bone cells, and mesenchymal cells in regenerating zebrafish tissues. The skinbow system might well be the first step to establish a complete, three-dimensional map of cell dynamics during vertebrate appendage regeneration. We merely scratched the surface of the subject at this point (literally!). New transgenic strains and analysis tools need parallel development to quantify cell behaviors in their respective z-positions, including in deep tissues. Nevertheless, I expect that new Brainbow cassettes that were recently developed in Jean Livet’s group (Loulier et al., 2014) would allow more flexibility in tagging and tracing different cell types in vivo, as now one can choose to paint either entire cells, or just nuclei and/or cell membranes in multicolor.

One thing I have learned to appreciate from this project is to be always on the lookout for unexpected findings, which can turn out to be more colorful than your best-laid plans.