Shaping the embryo towards gastrulation

If you’re into developmental biology, chances are you’ve spent some time in your life thinking about how cells change the shapes of tissues. What would cells need to do in order to prevent change of tissue shape, though? In the text below, I summarize my thoughts on why the question of not changing shape during growth might be of interest and discuss the findings from our PLoS Biology publication on the topic (Matejčić et al., 2018). I performed the experiments for this work in the lab of Caren Norden from the Max Planck Institute of Molecular Cell Biology and Genetics in Dresden and the theoretical work was done by Guillaume Salbreux from The Francis Crick Institute in London.

As tissues develop, they need to grow into their correct size and shape in order to function optimally. Biological studies in the past, as well as those today, investigated changes of tissue shapes during the process of morphogenesis, and how cells that build these tissues contribute to shape changes (for example, invagination or elongation). However, many tissues, such as the human ear or foot, establish their shape very early in development, and then need to continue to grow without changing their shape.

At first, such maintenance of the shape of tissues might seem like a very simple task; the cells building the tissue should only maintain an already established shape. But, as the size of a tissue changes, so might the conditions around it, making this task more complicated. A larger tissue may, among other changes, experience new physical constraints as its cells become more packed, stretched and/or compressed. As an example, imagine you have a cultured, 1000 µm x 1000 µm x 10 µm sheet of a simple, monolayered epithelial tissue. You want to scale this culture up 10 times while keeping its proportions constant (i.e., maintain its surface-to-thickness ratio). How would you go about this scaling task? You might wait for your epithelial sheet to proliferate and grow more, but it might only spread, making its apical surface bigger but keeping its thickness the same. You might then constrain its growth laterally, but cells might create a multilayered epithelium. In this case, cells might be extruded, stop dividing or the tissue might buckle. Therefore, keeping a tissue shape unchanged while it is increasing its size is not always as simple as adding more cells through proliferation. For similar reasons, it is also not trivial to predict which cellular parameters will affect tissue shape as its size changes. Despite the importance of such scaling of tissue shape during growth, this complex question had not previously been addressed.

The topic of tissue shape scaling during growth is best investigated in a tissue with a geometrically simple shape, that allows quantitative analysis, and where shape perturbations are easily detectable, as well as functionally significant. Such a tissue is the developing vertebrate retina, that establishes its shape early in development (during the first trimester in humans) and then maintains shape as it grows. It has a shape of a smooth hemispherical cup (Figure 1, left panel) and lies in the back of the vertebrate eye to transmit light impulses to the brain. As within the light path of a microscope, each component within the eye, including the retina, must be correctly shaped and aligned for light to propagate effectively. It is, therefore, not surprising that even small glitches in human retinal structure, in the form of wrinkles or thickenings, lead to distorted vision (macular pucker) and that its smooth shape is essential for optimal visual function. During embryonic development, the retina is a pseudostratified epithelium, a conserved and widely utilized tissue arrangement (Figure 1, right panel). As in all other pseudostratified epithelia, in the developing retina cells are long, spindle-shaped and all divide at the apical tissue surface. 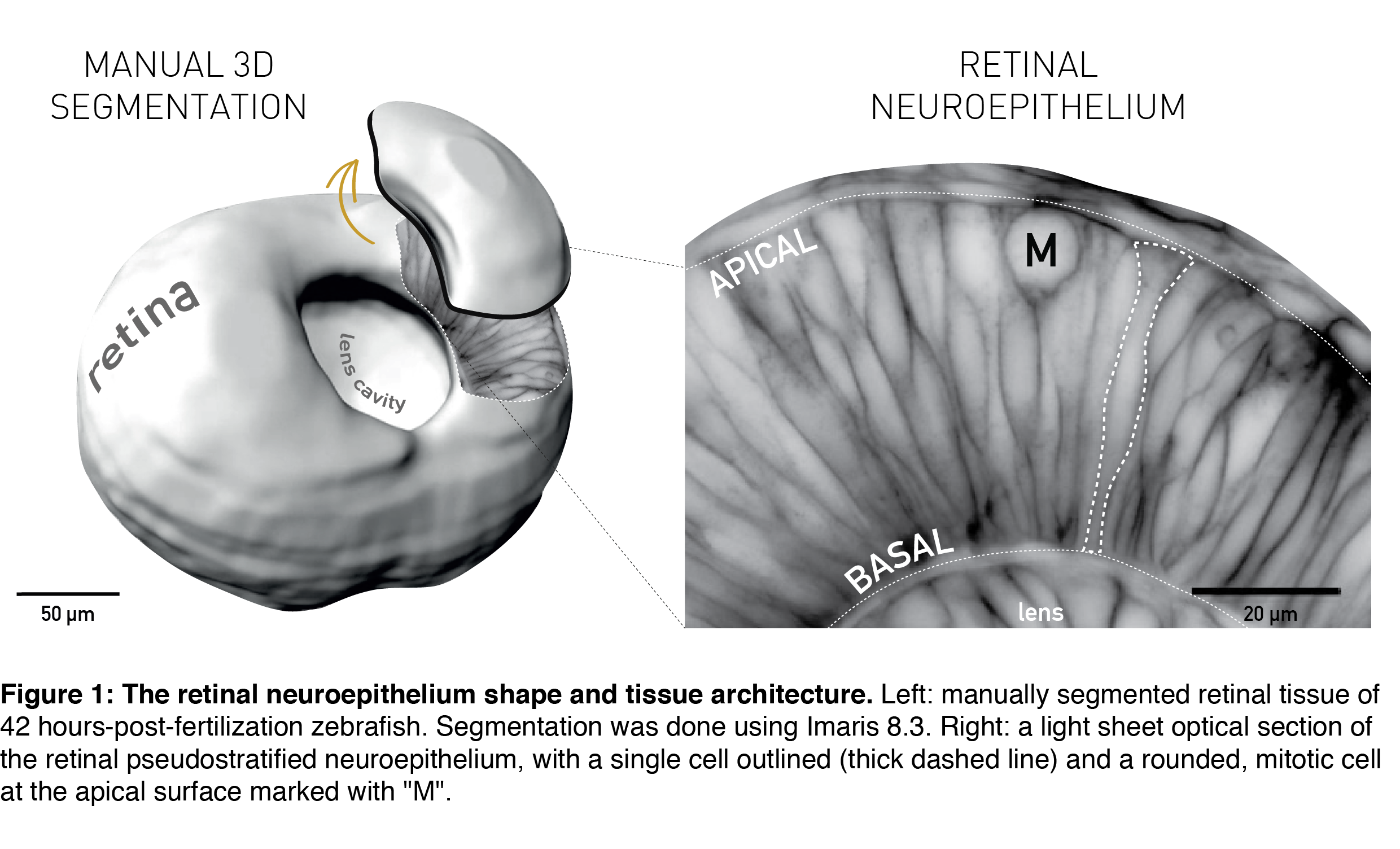 All these features are present in the retinal neuroepithelium of the zebrafish – an experimental model with the advantages of easy manipulation, tractable tissue-wide live and fixed imaging as well as fast development. In the zebrafish, the retinal neuroepithelium undergoes a phase of shape scaling in just 24 hours (stages ~20-48 hours-post-fertilization (hpf), Figure 2), which allowed me to study this entire developmental process within a single imaging session. Together, these factors make the developing zebrafish retina an excellent system to study tissue shape maintenance during growth.

Our project on retinal growth began out of a curiosity; I dug into how cell parameters such as number, size, shape and differentiation contribute to the increase in retinal size. Through these 3D, tissue-wide quantitative analyses (Video 1), we learned that, initially, all retinal cells divide, and after the developmental stage of 36 hpf, they have a 35% chance of exiting the cell cycle. Cell loss is negligible for growth in this system, and cells during development get smaller and smaller and increasingly packed. Overall, we were able to show that retinal tissue grows exponentially, by proliferative increase in cell number.

However, I mentioned earlier that to scale tissue shape during growth is not necessarily as simple as adding more cells through proliferation. For starters, we should know where in the tissue new cells are added; we know oriented divisions and non-uniform proliferation can affect tissue shape by causing non-isotropic growth. That’s why we first needed to confirm that cell divisions do not orient along a preferred axis. We also found that their spatial distribution is homogeneous in all developmental stages, meaning that new cells are added uniformly throughout the tissue. Together with the previous finding, we here showed that proliferation itself does not disturb isotropic retinal growth. But, as I will hopefully manage to convince you, there is still more to retinal scaling than “just” adding more cells. In the second part of this text, I describe our quantitative analysis of retinal shape, and the development of the shape of cells that build it.

One important metric to assess proportions of a geometrical object (e.g. your computer screen) is its aspect ratio. The aspect ratio – or height-to-width ratio – can serve as a measure of shape and shape scaling of the tissue, as in my epithelial-sheet-example from the beginning. Using the aspect ratio as a metric of shape, we could quantitatively show that the shape of the whole retinal tissue does not change during growth. In other words, retinal thickness and surface area increased in concert, allowing developmental shape scaling. The thick retinal neuroepithelial tissue is still an epithelial monolayer, with each cell attached at both the basal and the apical surface of the tissue. Due to this, this apico-basal thickening of the tissue we observed translates to an elongation of retinal cells; the already slender cells thin-out and elongate even further (Figure 3, Cell elongation panel). Was it possible that this change in the shape of cells was necessary to keep tissue shape unchanged by increasing its thickness as it grew?

Cell shape in many different developmental contexts is controlled by actin (rev. in Lecuit and Lenne, 2007; Paluch and Heisenberg, 2009; Salbreux et al., 2012). To understand what governs developmental cell elongation I measured, I looked at how actin is distributed in the retina. Indeed, the subcellular distribution of actin changed as the tissue grew. Precisely coinciding with cell elongation, actin was depleted from the lateral cell regions and remained prominent only at the apical- and basal-most cell processes (Figure 3, Actin redistribution panel). A simplified theoretical model by Guillaume Salbreux could explain such actin-based cell elongation by using the actin signal redistribution as a proxy for redistribution of the cellular cortical tension (Figure 3, Model panel). In combination with the measured rate of tissue volume increase, this model also recapitulated the overall constant aspect ratio of the retinal tissue during growth. 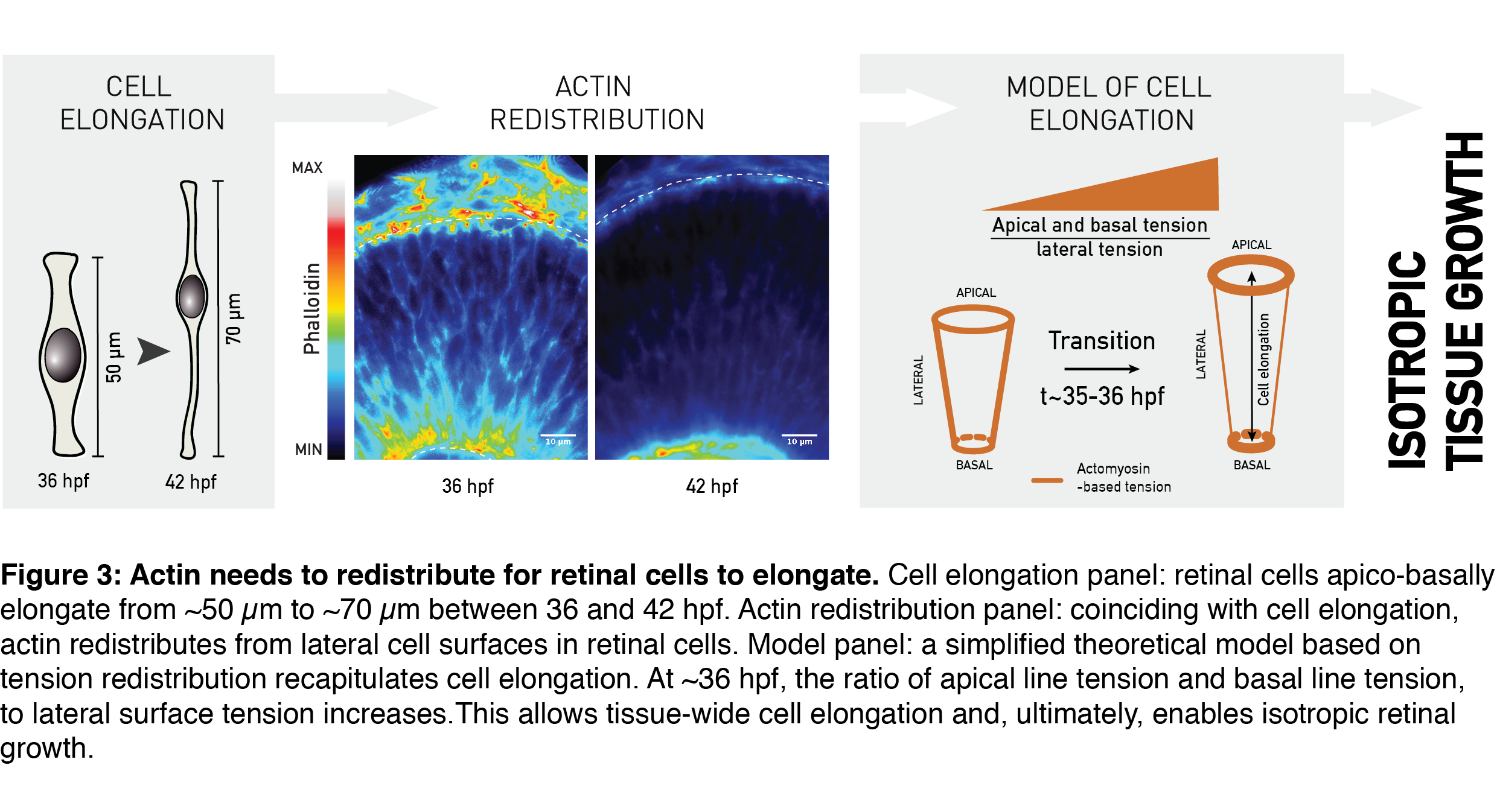 To test if cells indeed needed to elongate to allow scaling of tissue shape, I analyzed retinal development in the zebrafish mutant for histone deacetylase 1 (hdac1-/-), where eye shape was shown to be severely perturbed in the late stages of development (Stadler et al., 2005; Yamaguchi et al., 2005). From live light sheet imaging datasets, I found that cells in the hdac1-/- retina indeed failed to elongate (Figure 4, 40 hpf). In a very exciting finding, completely consistent with our working model, the lateral cell region in these mutants remained rich in actin signal even in late developmental stages. By simply keeping the cell tension ratio in our model unchanged we could theoretically recapitulate the divergence in shape between control and mutant tissue that we measured experimentally. This convinced us that redistribution of the lateral actin pool is necessary for cells to elongate and keep overall retinal shape intact. Upon growing further, the short-celled hdac1-/- retinal epithelia started disturbing their otherwise smooth tissue surface by folding apically (Figure 4, Video 2).

A day later, retinal folds appeared throughout the hdac1-/- retinal tissue and created a structure resembling more a miniature folded brain than a retina (Figure 4, rightmost panel). This severe shape perturbation demonstrated again how important it is for the retinal cells to elongate to maintain tissue’s aspect ratio during growth.

In an interesting side observation, folded retinas of hdac1 mutants could still differentiate into a neuronal tissue, despite the tissue having a heavily disturbed shape that would subsequently interfere with light propagation. This fact decouples retinal differentiation from tissue shape and highlights the importance of precise timing of developmental events; proliferative growth, actin redistribution and differentiation all need to be temporally coordinated to give rise to a fully functioning retina.

We also found that the synchronous, tissue-wide redistribution of actin and cell elongation are non-cell-autonomous events that depend on the extracellular matrix (ECM). We think that the ECM composition (or structure) changes at ~36 hpf in an Hdac1-dependent manner, and that this change affects actin tissue-wide, coordinating its redistribution within all retinal cells. In the zebrafish retina, Hdac1 functions upstream of Wnt/ß-catenin and Notch signaling. In turn, Wnt/ß-catenin can affect expression of ECM-genes (rev. in Astudillo and Larraín, 2014). So, by inhibiting Wnt/ß-catenin at the right time during development, Hdac1 might indirectly cause a change in composition of the basement membrane, and the ECM – actin axis might then act on actin redistribution inside retinal cells. Considering the evolutionary conserved tissue architecture and the players governing shape maintenance in the retina, similar mechanisms might be at play in other growing pseudostratified epithelia, such as the human retina or brain.

Overall, we combined experiments and theory to investigate the maintenance of retinal tissue shape during growth. We identified actin redistribution from the lateral cell membranes as a simple developmental cue necessary to elongate cells and thus keep the overall aspect ratio of the retinal tissue unchanged. Our story highlights that uniform growth and constant shape during development are not default states but require maintenance at the cell level (Shraiman, 2005), and I hope it will motivate further studies of coordination growth and shape during development.

Altogether, we generated a rich, 3D tissue-wide dataset of retinal growth and shape, quantifying many cell-level parameters during development of the retinal neuroepithelium. It would be great to have such detailed studies of many other organs. I think such knowledge should then be used as a ground truth of wildtype development to get closer to rebuilding synthetic and simulated tissues, but also to “debug” development in systems such as organoids, to ultimately really understand in vivo development.