Another installment from the Developmental Neurobiology Students at Reed College. Hope you enjoy!

It’s not often that you get to recount the classic tale of Stone Soup when thinking about developmental biology, but that’s exactly what we did when discussing an almost classic 2011 Nature paper from Yoshiki Sasai’s group.

In the story, a grumpy widow is about to turn a hungry traveler away until he says, “But all I need is a pot, and I will make you a delicious soup.” Producing a single stone, he says “put some water on to boil; you’ll be amazed at the result.” After a few minutes of stirring the traveler smells his mix. “Could use some carrots,” he murmurs to himself, and overhearing him, the widow replies “Oh! Those I’ve got!” And so on with onions, and potatoes, and greens until a full-bodied stew results. The soup begins as a rock but adopts its recognizable form in response to the continually changing conditions.

Morphogenesis is the process through which an organism, or a part of an organism, acquires its specific shape. Although the making of stone soup doesn’t seem to have much in common with embryonic morphogenesis, both processes require the sequential addition of specific ingredients to generate a complex result. A multicellular organism begins as a collection of undifferentiated cells (kind of like the stone and water). Then, in response to genetically-encoded programs, its cells acquire identities, forming tissues and undergoing morphogenetic movements. In a way, cells follow a temporal and spatial recipe, slowly changing to make a specific functional part of the organism.

Since the early 20th century, the study of morphogenesis has focused on how mechanical and chemical signals work together to produce identifiable organisms. Because development of the eye occurs in discrete steps that are easy to follow, eye morphogenesis has been the focus of many studies. After eye cells are initially specified, distinct ocular tissues – neural retina (NR), retinal pigmented epithelium (RPE), and optic stalk – take shape from three distinct tissue types – neural ectoderm, mesenchyme, and epithelium, respectively (see this comprehensive review of eye morphogenesis by Sabine Fuhrmann, 2010).

Although a number of studies have begun to shed light on the steps of eye morphogenesis, the mechanisms that initiate tissue folding and bending remain elusive. To tackle this question, Yoshiki Sasai’s lab induced eye growth from mouse embryonic stem cells with a specific recipe of basement-membrane components and a cocktail of signaling molecules, including the TGF-beta family member, Nodal. In just nine days, the stem cells underwent four distinct phases to produce an optic cup replete with stratified neural retina and RPE.

Together, the four phases of morphogenesis consist of three distinct processes that produce and depend on the formation of a hinge-like structure that ultimately becomes the rim of the optic cup (see Figure below). In phase one, spherical pockets, reminiscent of optic vesicles, form. In phase two, the distal surface of the spheres flatten to begin the invagination process, requiring actomyosin activity. In phase three, the edges between the flattened surface and the rounded part form hinges through apical constriction. In phase four, the optic cup becomes fully-developed, with the rim of the optic cup encircled by a “closed” hinge. 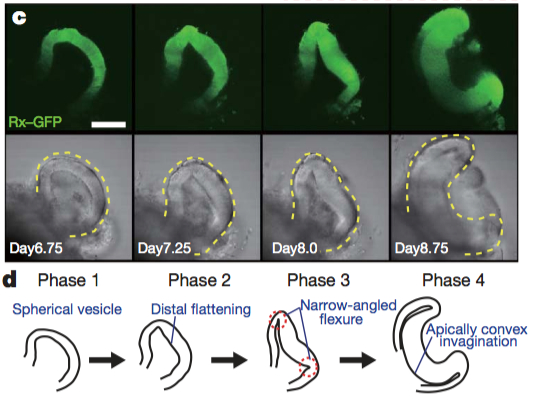 As we thought about how the optic vesicle folds to make the optic cup, it was helpful for us to think of another analogy: the wrinkly fingertips you get after doing dishes. Water is absorbed into your skin as you scrub that fourth pot (left over from making stone soup). The outermost layer of skin expands until its volume exceeds the flat surface that it occupies on each finger pad. For the skin to continue to fit over the small area of your fingertip, it puckers, forming hills and valleys at regular intervals. The developing eye appears to use this same principle, with one large, carefully guided wrinkle generating an eye’s shape.

Higher levels of proliferation in the distal part of the optic vesicle cause the developing neural retina to first swell and then fold inward. This inward folding is driven by two opposing physical properties that manifest in the NR and the RPE. Overtime, the NR and RPE exhibit distinct differences in rate of expansion (volume) and rigidity. Initially the entire optic vesicle is uniformly rigid (Phase 1), reinforced by an actin cortex with phosphorylated myosin light chain (pMLC) cross-bridges. Changes in activity and/or distribution of myosin light chain kinase leads to an accumulation of pMLC only along the apical surface of RPE cells (Phase 2). As proliferation in the presumptive NR continues, cells at the junction between the NR and RPE undergo apical constriction (Phase 3) and the NR completely invaginates (Phase 4).

This is the first study to recapitulate eye morphogenesis in vitro, providing evidence that complex, laminated pockets of neural tissue can self-organize to produce a retina. Although Eiraku et al. (2011), offer clear evidence that an optic cup can form spontaneously, without surface ectoderm (lens) or other neural ectoderm (brain), it is important to note, the earliest stages of specification and morphogenesis occurred only in a particular “soup” of extrinsic factors and specific culture conditions. This paper provides the foundation for understanding how delicate genetic cascades and self-organizing principles work together – like a time-sensitive recipe – to generate functional retina, and it reveals the power of stem cells, opening up new avenues for research into retinal regeneration as demonstrated by this 2012 Cell Stem Cell paper.