This is the last of four posts relating to the Future of Research symposium which was announced in a previous blog post. Each of these posts will discuss a topic that is the focus of a workshop at the Symposium. Even if you can’t attend, please tweet @FORsymp with suggestions, or follow us to respond to our questions about what YOU, trainee scientists, think is important. The hashtag for this post on the Funding workshop is: #FORfunding

Is the level of funding for research appropriate?

Industry research and development (R&D) spending has increased from approximately one third to two thirds of the total over the last decades, with Federal dollars making a complementary decrease (Historical Trends in Federal R&D). However, funding for basic research within this is primarily supplied by the Federal government. The Federal government accounts for 55% of total basic research funding (Science and Engineering Indicators 2014), whereas less than 4% of the money industry spent on R&D has gone to basic research (Research and Development 2008). 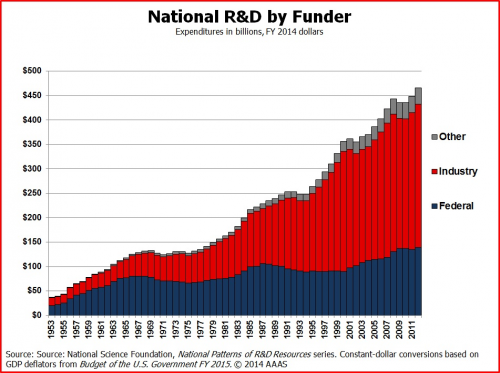 Part of the crisis in the scientific enterprise is due to the unpredictability of research funding over time. Federal biomedical research funding nearly tripled over the decade ending in 2002, but has shrunk ~25% since (Figure 2, Alberts, 2014). As early as 2003, the rapid increase in funds over the previous decade was generating questions as to where trainees would end up with no concomitant increase in academic positions (Russo, 2003). There was also a call for institutions to become more responsible for funding “hard-money” faculty positions, and to remove NIH incentives for doing so, rather than relying on external sources of funding for “soft-money” positions (Alberts, 2010). Now that there has been a contraction in funding, these problems, left unanswered, have become immediate. For institutions and individual researchers attempting to make long-term career or program decisions, uncertainty makes coming up with good plans very challenging. 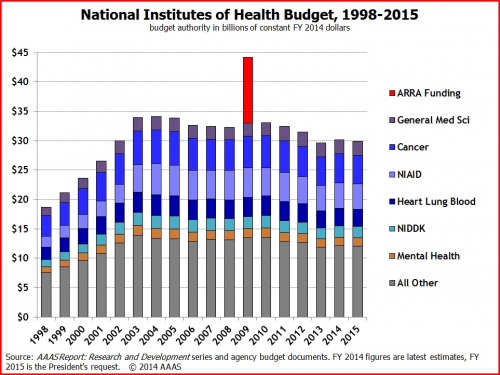 Under the current system, funding primarily supports individual investigators for approximately five-year periods. Most of this funding is for project-based grants in response to proposals that designate a specific plan of work, usually relying on preliminary data.

A new Federal funding mechanism has recently been proposed, the Maximizing Investigators’ Research Award, which would support a lab’s overall research program rather than being specifically directed to a particular project.

Since funding for basic biomedical research comes heavily from tax dollars, it is important that taxpayers get value for their money. In particular, trainee support is a small fraction of the total (approximately 4% of the total NIH research grant budget).

What can be done?

Now that the system has reached an identified point of crisis (Alberts, 2014) there are unanswered questions as to what happens next and speculation is rife. For example, the spectre of “unpaid postdocs”, furthering the similarity of postdoctoral research to corporate internships, has been raised. But putting more money into the system has been suggested as only a temporary fix, that does not provide long-term solutions to the problems in academic structure (Martinson, 2007; Alberts, 2014).

The objective of the Funding workshop is to ask:

How do we structure funding to promote desired outcomes such as the discovery of basic knowledge, finding applications of knowledge for the betterment of society, and training the next generation of scientists?

Senator Elizabeth Warren has proposed both doubling the total investment in scientific and biomedical research and removing the NIH budget from the annual budgeting process (Warren 2013). The American Academy of Arts and Sciences (Augustine 2014) has offered a proposal along the same lines and further offer a number of detailed proposals for reducing overheads associated with securing and employing funding, focusing training funds on individuals rather than on programs, and improving communication with the public on the contributions and importance of the basic research enterprise.

We would like to hear your perspective on the merits of these proposals as well as suggestions of your own at the Symposium!

Should funding for research and training be separated?

Should there be different funding mechanisms for post-docs that intend to pursue a career in industry versus academia?

Should there be a regional cost of living adjustment of grad student and post doc salaries?

This post has been written from input provided by the moderators of the workshop on “Funding in Research”.

Research and Development 2008: Essential Foundation for U.S. Competitiveness in a Global Economy. National Science Board.

Diaz-Martinez, L (2014) Are Unpaid Postdocs the Next Trend in Biomedical Research? The ASCB post.

The Future of Research Symposium:

The Funding of Research”