One of the biggest open questions in biology is how organisms can form complex patterns (limbs, organs, entire body plans) from initially disordered or very simple states. Every animal does this at the beginning of its life, forming its full complexity from a single cell. Some are capable of similar feats even after their bodies are fully constructed: starfish and flatworms survive when cut in pieces, the zebrafish restores lost fins, the axolotl regrows limbs and organs alike. How does either case work? How are those patterns established so accurately, and how is it that things so rarely go wrong? 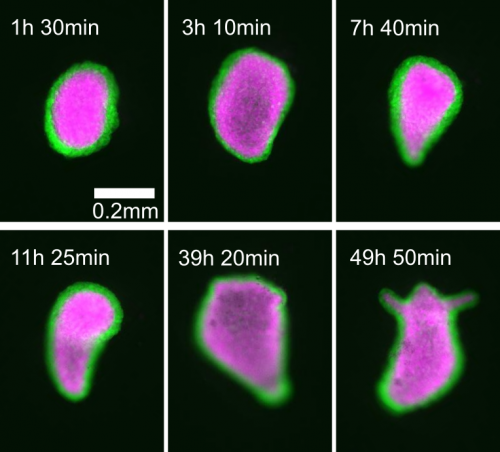 I’m trying to approach this question with the help of one of the most impressive regenerators of all: Hydra. As a 1 cm long freshwater cnidarian it’s a lot less impressive than the monster whose name it bears, but what it lacks in scales and fangs it makes up for in raw regenerative ability. The mythological beast grew two heads for every one it lost. The real thing can regenerate its head, can regenerate from a ball of tissue as small as 150 microns across, and can come back from being dissociated down to single cells if enough of those cells are placed together. On top of this, the small size and simplicity of the creature make it very easy to study and manipulate compared to other model organisms. In fact, several theoretical models purporting to describe the patterning process have already been developed.

Of particular interest is the fact that these models propose mechanical forces as drivers of pattern formation. Mechanical forces are well known to be important in embryonic development but their role in regeneration is less clear. As a Hydra regenerates it first forms a hollow sphere, which then undergoes osmotically driven cycles of swelling and rupture. According to the literature, there is a characteristic switch in these oscillations from large amplitude and low frequency to small amplitude and high frequency, and this shift is linked to when the animal sets its body axis. Thus the pattern shift was proposed to represent a link between mechanics and biochemistry. I wanted to determine what the mechanism linking mechanical forces to biochemical axis specification was. 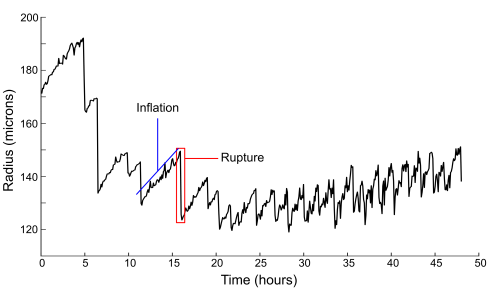 On observing many regenerating animals, one of the first things we noticed was that nearly half of the animals we imaged regenerated without a clear shift in oscillation pattern. As this called into question essentially all previous assumptions about the nature and relevance of the pattern shift, we turned to trying to figure out its exact cause.

It was previously proposed that the change in oscillation behavior might be due to the beginnings of a regenerated mouth. This idea makes logical sense, as adult Hydras open their mouths to relieve internal water pressure as well as to feed, but nobody had experimentally tested it. By using injected fluorescent beads to track the location of successive rupture sites, we determined that the spot where rupture occurs is random during large oscillations but conserved during small ones. These data would be consistent with the theory that the large oscillations are due to the tissue tearing under internal pressure, while small oscillations occur when the mouth is established to act as a vent. As confirmation, a tissue piece containing the mouth of the original animal also produces conserved rupture sites and only shows small oscillations.

To this point we had only shown that oscillation behavior and the mouth are somehow correlated. These experiments do not explain how the mouth might affect oscillation behavior. Thankfully, Hydra’s ease of manipulation offers a direct way to establish causality. It’s possible to eliminate all nerve cells from a Hydra, producing a nerve-free animal that is structurally normal but cannot actively move. The critical experiment was to use mouth-containing tissue pieces cut from such nerve-free animals. These contain a mouth that is fully formed and complete, but cannot open on its own. If the deciding factor for small oscillations to occur is simply that the mouth acts as a weak point and tears more easily, nerve-free samples with a mouth should show small oscillations exactly like their normal counterparts. If on the other hand mouth function is the key, they should show large oscillations.

We find that nerve-free mouth pieces show only large oscillations, indicating a causal link between active control of mouth function and a decrease in oscillation amplitude. This provides a concrete explanation for the oscillation pattern shift in cases where it occurs: it is caused by the animal’s ability to open its mouth at will.

Our study does not answer why some pieces are delayed in developing mouth function or provide exact developmental checkpoints. What it does give us is further constraints and parameters that can be used to improve existing models, and put us one step closer to understanding how Hydra regenerates. As Hydra shares many key biochemical pathways with more familiar animals despite its alien appearance, figuring out patterning here could one day be the basis of a similar understanding in humans.