The diversity and complexity of shape in uni- and multicellular organisms has long been a source of fascination and interrogation. Since the seminal work of D’Arcy Wentworth Thompson, the study of the emergence of shape, so called morphogenesis, has been strongly influenced by the concept of emergence whereby complex pattern/shape can be explained by relatively simple mechanical and mathematical laws. In parallel, the rapid progress of the biochemical characterisation of the regulators of cell signalling has opened the possibility to compare developmental programs and dissect the molecular basis of evolution. Yet, how mechanics and mathematical laws may constrain the evolution of new shapes and morphogenesis has only come back to light recently. For two days (12 and 13th of December 2022), the symposium MeMoDEvo taking place in Institut Pasteur in Paris tried to discuss this issue by gathering interdisciplinary speakers and participants on site and online and organising two mornings of open discussions. The discussions and talks covered a large range of approaches (mathematics, fluid mechanics, soft matter physics, genetics, evolution, developmental biology, epistemology…) showcasing a diverse set of organisms, from mammals, birds, reptiles, insects,  choanoflagellates, plants, algae, yeasts, and bacteria.

This fully hybrid meeting gathered close to 100 participants on site (mostly from Europe) and 100 participants online and its unusual format led to very interesting discussions and interactions. The conference was possible thanks to the support of several sponsors, including The Company of Biologists, the French Society of Developmental Biology, the Qbio initiative in Pasteur and the Pasteur Institute, as well as the DIM Elicit initiative

One of the best parts of conferences that we had been missing over the past two years is the free time and open discussions in between sessions. We therefore dedicated a significant amount of time to open discussions and round tables during mornings with a subset of participants and the speakers (roughly 40 people). In line with the spirit of the meeting, we relied on a mixture of programmed schedule and self-organization.This engaging time involved first a quick introduction by each participant on their background and interest, followed by open discussions on the first day. This was followed the next morning by three round table discussions. 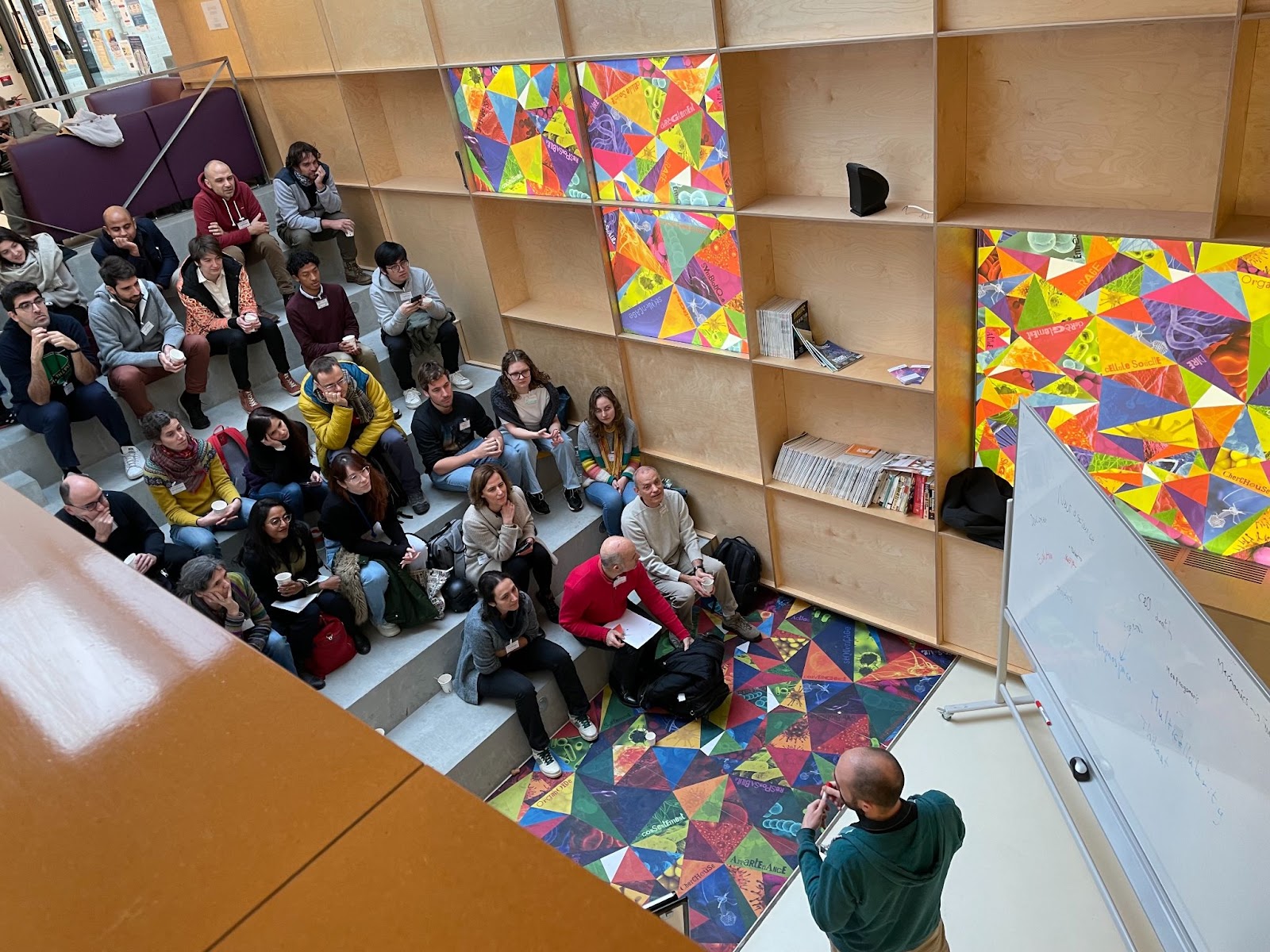 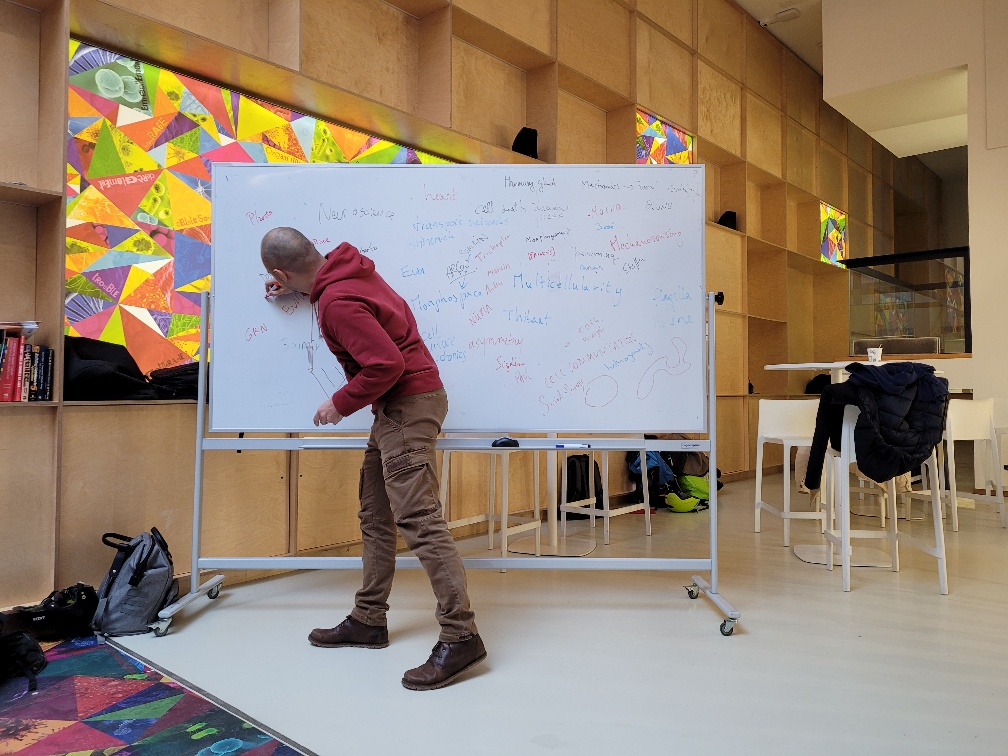 The first round table addressed constraints on the evolution of shape and how to reveal them experimentally. How can an organ evolve from one shape into another? Are there any limitations regarding shape innovation? The discussion included the distinction between pure physical/environment constraints and developmental hard-wired constraints related to the evolution history of the organism. Exploring the distribution of organ shape in the morphospace (using landmarks and dimension reduction) using intra and inter-specific variability can reveal such constraints by looking at non-occupied zones in the morphospace. The cause of these unoccupied areas can be either selective pressure or funnelling of evolutionary change by developmental constraints. A combination of description of natural variation and exploration of shape variability in the laboratory (including direct perturbation of developmental processes by mutagenesis and experimental evolution) may help to disentangle them. The discussion ended (as expected) with more questions than answers concluding on the  mysterious cases of abrupt shape evolution/innovation which have to bypass strong developmental constraints while maintaining proper adaptation.

The second discussion was centred on the emergence of multicellularity comparing a large range of organisms which combine single cell and aggregate life mode. By comparing the mode of multicellularity (clonal/aggregative), the signals/conditions triggering aggregation or dissociation and the components that can structure and organise the aggregates (adhesion, contractility, matrix), a very complex pictures emerge with all sort of combination of strategies found in nature, outlining again the diversity of evolutionary path leading to multicellularity (see the table below summarising the comparison).

Finally, the last discussion was centered on sharing experience with various methodologies for mechanical simulation of tissues, ranging from continuous model, object based modeling and finite element modeling.

The two afternoon sessions were following a more classic conference format alternating talk on site and online with an hybrid crowd. You will find hyperlinks connected to the published works that were discussed during these sessions (preprint and peer-reviewed articles). The meeting was launched by Thibaut Brunet (Institut Pasteur) who made a quick historical overview of the evolution of approaches to understand development and the various phases that brought to the front stage the role of mechanical constraints in shape evolution and its recent rejuvenation. The first talk was then given by Bruno Vellutini from Max Planck CBG who illustrated how the appearance of the cephallic furrow during evolution in Drosophila embryo may have helped to buffer mechanical constraints generated by ectoderm movements and cell division during gastrulation. Marie Monniaux, from the ENS RDP lab in Lyon, described the morphogenesis of petunia petals and sepals and how the comparison of mutants can help to disentangle the regulation of growth and shape by different epidermal layers. Jean-Léon Maître from Institut Curie then provided a quantitative comparison of the mechanisms of embryo compaction in different mammals, illustrating how qualitatively similar mechanisms can yet rely on quite different absolute mechanical properties. Arghyadip Mukherjee from the ENS in Paris described how topological transition through different modes of epithelial fusion can help to describe neuroepithelial organoid shape evolution. This was followed by Jose Bico, from the ESPCI, who illustrated how living matter can be used as an inspiration for generating complex inflatable shape based on local differences of inflation/growth (with a live illustration on stage with cup, saddle or helix shape generating devices). We then came back to insects with Steffen Lemke (from Heidelberg University) who compared gastrulation between different fly species (including Drosophila) and identified essential genes sufficient to explain several morphogenetic innovation in flies (including the mode of mesoderm invagination, cell elongation and the requirement for cephalic furrow). We then finished the first afternoon session with Annemiek Cornelissen from LMSC laboratory in Université Paris Cité,  who used cracking theory and differential mechanical properties of tissues to explain the morphogenesis of jellyfish canal network.

The second afternoon session started with Arkhat Abzanof  from Imperial College London who illustrated the power of morphospace analysis for the understanding of craniofacial shape evolution in vertebrates (from bats, Darwin finches and crocodiles). He was then followed by Hélène de Maleprade from Sorbonne Université who described various collective and single cell swimming strategies in Chlamydomonas, Volvox and Gonium. We then had an online talk from Lakshminarayanan Mahadevan from Harvard university describing fluid mechanics model of multicellular movements occurring during chick gastrulation and how the variation of initial conditions can recapitulate different modes of gastrulation across Vertebrates. This was followed by conceptual and theoretical considerations from Ana Soto and Maël Montevil from the Centre Cavaillès on the concept of autonomy in living systems and the definition of core principles (default state, variation and organisation) allowing proper understanding of a living system. We then came back to plants with Etienne Couturier from the LMSC lab who applied the Lockhart model (describing cell growth as a function of turgor pressure and viscoelastic deformation of the wall) to describe the dynamics of maïze root growth against a physical obstacle. This was then followed by an online talk from Peter Yunker from Georgia Tech describing his work in collaboration with Will Ratcliff on the ‘long-term experimental evolution’ of multicellular development in yeast. Remarkably, experimentally evolved yeast colonies were recently reported to have acquired macroscopic sizes after years of selection in the lab. The talk dissected the cellular and physical basis of this transition, which turned out to rely on mutations promoting elongated cell shape and reducing the mechanical stress that can cause colony fission. The meeting ended with a broad theoretical view of the evolution of multicellularity and morphogenetic innovation by Stuart Newman from New York Medical College, introducing the concept of dynamical pattern modules (integrating gene regulatory network and associated physical/spatial constraints) and their contribution to developmental and morphological innovation during evolution.

The meeting managed to gather a diverse crowd leading to a very refreshing and eclectic program. The relative “self-organisation” of the morning sessions actually led to very vivid interactions and deepening of the questions related to the meeting topic. All the participants came to conclusion that we should be ready for a MeMoDEvo#2 ! Of note, the symposium was the living proof of the possibility to organise a diverse, inclusive and very dynamics meeting while limiting environmental impact. Every speakers used the train to commute to the meeting and we could yet gathered a diverse crowd from Europe as well as many online attendees and speakers from other continents. Despite the usual technical hiccup associated with the hybrid format, we can only recommend the application of the same recipe !