Turtles are peculiar vertebrates. They have a compact skull with no temporal openings, a beak instead of teeth, a contractible neck, and a shell covering its trunk. The famous turtle shell is composed of two halves, a plastron (ventral) and a carapace (dorsal). The latter is an exquisite arrangement of vertebrae and fan-shaped ribs with secondary ossification forming a rib cage that encloses the limb girdles.

Side view of a turtle skeleton. Illustration by M A Smith.

Please, take a moment to imagine your shoulder inside your rib cage. How such intriguing anatomy has evolved from a standard external-to-the-ribs configuration? As drastic as this change may seem, researchers from the Japanese RIKEN Center for Developmental Biology provided an elegant and straightforward explanation. 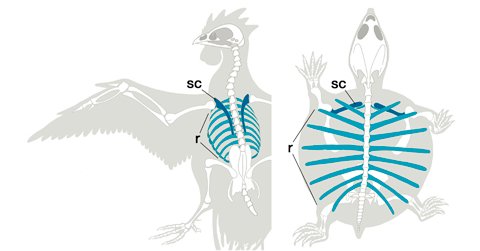 A basic step for evolutionary studies is to understand the history of the group. Who is it related to? The evolutionary relationships of turtles within the amniotes (mammals, reptiles, and birds) are not well understood. The traditional view based on skull morphology places them as basal reptiles while more recent molecular data group them with birds and crocodilians. A robust phylogenetic hypothesis allow us to infer evolutionary processes by the arrangements of nodes and characters. However, it is generally difficult to extract more fine-grained insight about how the changes occurred. Fossils do provide direct evidence of ancient forms, but they are rare. Can we do better? 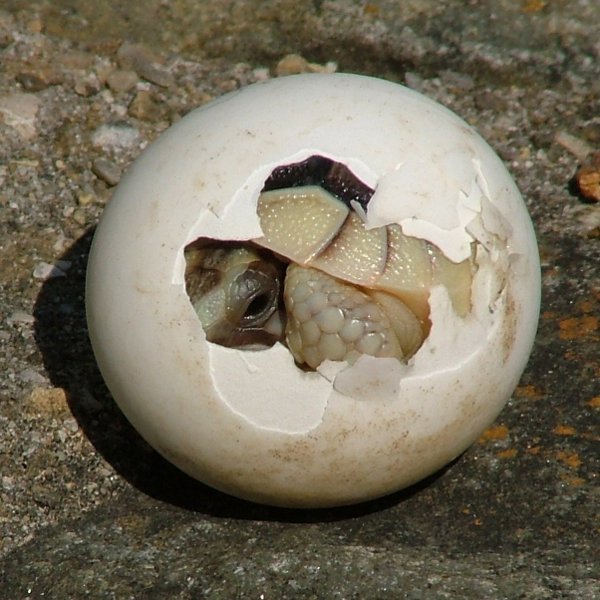 “All that we call phylogeny is today, and ever has been, ontogeny itself. (…) Phylogeny is but a name for the lineal sequences of ontogeny, viewed from the historical standpoint.” (Whitman, 1919; via Hall 1999)

Embryonic development is the process that builds the morphology of multicellular organisms. Scrutinizing development help us understand how structures are formed and regulated during ontogeny, and thus, how variant patterns can arise. Comparing the developmental sequence of a structure in different organisms may provide insightful information about evolutionary changes and the origins of morphological characters; given that you have a working phylogenetic hypothesis and a certain amount of care, since development also evolves.

To investigate the developmental changes related to the turtle unique body pattern Nagashima et al. (2009) [2] did exactly this: followed the developmental sequence of the turtle Pelodiscus sinensis while comparing to the correspondent stages in chicken and mouse embryos. This comparative approach allowed to pinpoint the exact moment in time when the morphology of the embryos began to differ during development and correlate the data with adult body patterns. And what they saw was simply awesome.

The authors observed that the scapula appeared lateral to the body wall, near the limb bud (see above, ribs: white; scapula: green), and with similar muscular connections in the three embryos. The ribs of the turtle embryo were shorter in length while the ribs of the mouse and chicken had grown ventrally into the lateral body wall. At this stage, except for minor positional differences and rib length, the musculoskeletal pattern of the embryos was quite similar. But from this point on the turtle embryo began to differ from the other two.

In the mouse and chicken embryos the scapula simply grows posteriorly, above the ribs. Instead, in P. sinensis the scapula does not grow a posterior blade-like portion and is held inwards by a lateral folding of the body wall. It is positioned over the first rib and is encapsulated by the second rib which grows laterally and anteriorly. The trunk muscles connecting the scapula to the back retained their ancestral connections only adjusting to the “new” position. Limb muscles, on the other hand, formed new connections that are turtle-specific.

The process is much easier to understand with 3D animated embryos:

Movies provided by the Laboratory for Evolutionary Morphology, RIKEN Center for Developmental Biology and available here.

It is interesting to note that rib development is somehow refrained from moving ventrally and the ribs remain in the axial region (unlike other amniotes whose ribs grow ventrally). This might inhibit the posterior growth of the pectoral girdle and is possibly the reason why ribs grow laterally in the turtle. This lateral growth and the body wall folding enclose the limb girdles. 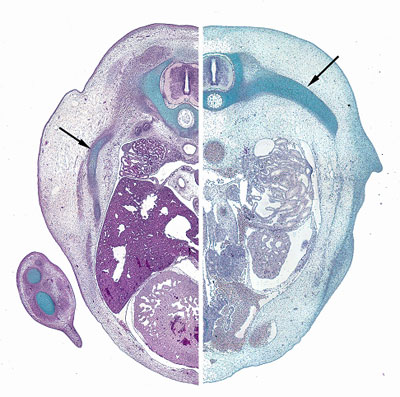 What could be regulating these ontogenetic movements? Right above the folding of the body wall there is a thickened ectoderm with undifferentiated mesenchyme forming a longitudinal ridge which is unique to turtles. This Carapacial Ridge (CR) is coextensive with rib growth and shares histological and molecular characteristics with the Apical Ectodermal Ridge, responsible for the patterning of limb buds. For these reasons it is believed to have a role in the turtle shell formation, although its functions remain unclear. Implanting CR grafts more dorsally or ablating the ridge did not alter rib growth, although in the latter the tips of the ribs joined distally at the site of the wound. These experiments suggest that the CR does not induce rib growth, but may regulate the fan-shaped pattern of the ribs. 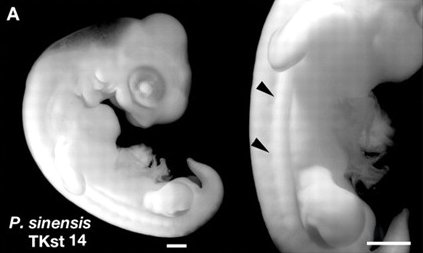 Carapacial Ridge of the turtle P. sinensis (arrowheads indicate the lateral of the embryo, where the longitudinal ridge begins). Modified from Figure 1 of Nagashima et al. (2007) [3]

The development of a modern turtle does not reconstitute the evolutionary history of its kinds, but it can provide clues to the underlying mechanisms of the turtle body evolution. For instance, if the CR indeed is responsible for the maintenance of the fan-shape pattern of the ribs, it is likely that ancient turtles with fan-shaped ribs had a CR during embryonic development. It is also possible to make predictions based on the observed developmental processes; for example, that the arrest in rib growth preceded the enclosure of the scapula during evolution. Ribs encasing the lateral body wall ventrally would pose a physical barrier to the displacement of the scapula, so it is more likely that rib growth was altered first.

Fact checking these predictions is complicated and we must rely on fossils to get a glimpse of the past.

Before 2008 the oldest known turtle fossil was Proganochelys, a creature that had a complete shell and internal girdles. Since it already had a turtle body pattern, not much information could be extracted to understand the onset of the group’s evolution. But in 2008, Li et al. [4] found a 220 million years old fossil of an ancient turtle with many interesting (read intermediate) features, named Odontochelys.

What does it looks like? It had a plastron, but not a carapace; its ribs were not fan-shaped, but were short and not bended ventrally; and the scapulae are ahead (rostral) of the ribs, but not underneath. It also had teeth and many other specific anatomical details. 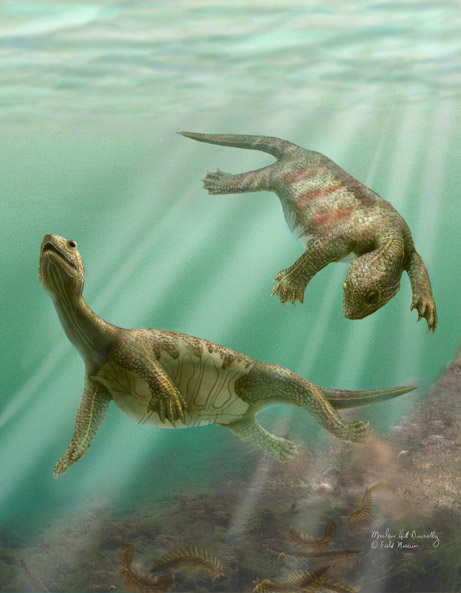 Illustration of Odontochelys by Marlene Donnelly.

Not only Odontochelys morphology is compatible with Nagashima et al. (2009) observations, but the shoulder anatomy even roughly paralels an early stage of P. sinensis development, although muscle connections were not clear. The authors speculate that the CR of Odontochelys was reduced and did not form a complete carapacial margin because the ribs do not exhibit a fan-shape pattern and there is no carapace.

Odontochelys could be interpreted as an intermediate stage for the turtle shell evolution, unless, of course, the apparent absence of a carapace is the result of a secondary reduction. Reisz & Head (2008) [5] argue that some modern turtles have greatly reduced the ossification of dermal components of the carapace, commonly associated to aquatic environments. Truncation of the carapace ossification is a plausible developmental mechanism that would lead to Odontochelys morphology. And the debates go on…

Anyway, developmental and fossil evidence insinuate that the once thought dramatic body pattern transformation, might well have occurred by a series of gradual developmental changes during turtle evolution. Nagashima and colleagues also made an animation about their take on the turtle evolution:

Things I wonder: how large is the variation of scapular positioning pattern within the turtles? Does their ecological habits influence shoulder anatomy? Does the secondary loss of the carapace (leatherback) affect girdle positioning?