Each year at the International C. elegans Conference Ahna Skop organises a Worm Art Show with winners selected by the meeting participants (find out more about the history of the show here).

2017’s winners have just been announced – read about them over at the GSA’s Genes to Genomes blog (a great site for your bookmarks if you haven’t visited it already!). 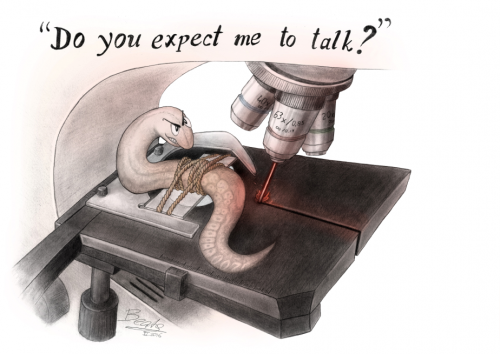 Each year FASEB runs a BioArt competition to “share the beauty and breadth of biological research with the public”, and their 2017 competition is now open with a submission deadline of August 31, 2017. Entries can be submitted to four categories:

This highly-detailed image of the central nervous system from a horned dung beetle (Onthophagus sagittarius) was captured with a laser-scanning confocal microscope. Imaged during the late pupa stage, this beetle was about to complete metamorphosis. The optic lobes (top) are in the process of growing and extending towards the outer surface of the head to form a pair of compound eyes. Different colored fluorescent labels were used to visualize the distribution of a structural protein (red), the neurotransmitter serotonin (green), and genetic material (blue). This image is from a National Science Foundation-supported research project on the evolution of novel and complex traits. By Eduardo Zattara, Armin Moczek, Jim Powers, Jonathan Cherry, and Matthew Curtis

o form new tissues and structures during development, populations of cells move, often over long distances. This movement, called cell migration, is highly coordinated across space and time. This zebrafish (Danio rerio) larva was labeled with red fluorescent molecules to identify the migrating cells that will compose the surface of the fish’s skin, or epithelium. Genetic material (blue) and, in a subset of cells, a structural protein (green) were also labeled. Although this image is of a fixed zebrafish, the research group is using live imaging to observe the movement of these cell populations in real time. Drs. Ruiz and Eisenhoffer are researching cell migration to better understand normal facial development as well as the genetic mutations in humans that lead to congenital birth defects such as cleft lip and palate. By Oscar Ruiz and George Eisenhoffer

Spinal cord injuries often lead to lifelong disabilities. To achieve functional recovery, the nerve pathways that were damaged must be reconnected. One potential solution is to induce the nerve stem cells already present in the adult spinal cord to reestablish these connections. This requires activating the stem cells to grow long extensions while simultaneously preventing the formation of scar tissue, which can block these extensions. This image from a NIH National Institute of Biomedical Imaging and Bioengineering-supported study shows a mouse nerve cell (blue/green) on a synthetic nanofiber gel (purple) designed to mimic healthy spinal cord tissue. The nerve cell has grown long extensions (green) into the gel. The researchers found that injecting these nanofibers at the site of a spinal cord injury reduced scar formation and helped to restore hind leg function in mice. By Mark McClendon, Zaida Alvarez Pinto, and Samuel I. Stupp

Proper bone and cartilage development is critical to support body structure and protect vital organs. For example, the skull supports and protects the brain while the ribs protect the heart, lungs, liver, and spleen. As seen in this image of mice at different developmental stages, bone (green) and cartilage (reddish-orange) formation begins during the embryonic period (far left) and continues throughout adolescence (far right). The NIH National Institute of Dental and Craniofacial Research supports this research program on genetic mutations that cause abnormal skeletal formation and underlie many congenital birth defects. By William Munoz, Karla Terrazas, and Paul Trainor

C-shaped rings of cartilage (red) give the trachea, or windpipe, its shape and strength. Because all oxygen that reaches the lungs must first pass through the trachea, its structural integrity is essential to human life. In conditions like tracheomalacia, malformation of the cartilage weakens the trachea, leading to airway collapse. The NIH National Heart, Lung and Blood Institute supports this research project on identifying the signals that prompt developing cartilage to segment into C-shaped rings. This image from a mouse is helping the investigators examine the organization of nerve cells (green) and their potential role in directing cartilage (red) formation. By Randee Young and Xin Sun

Olympus Image of the Year

Olympus has announced its first Image of the Year competition for life sciences:

“Show us and the world the art of light microscopy and illustrate the details of life with your most beautiful image.”

Deadline for entries is 31st October

This competition is “open to scientists, and winning entries are chosen according to 2 key criteria: they should be aesthetically pleasing, and convey an interesting scientific phenomenon.” Deadline is 31st August, more details here.

Among the categories, ‘Micro-imaging’ is probably the best bet for developmental biologists! Here’s a couple of runners up of last year’s competition:

Runner up: Micro-imaging. “The spiralled snake axis” by Tyler Square. During early growth and development, most vertebrate animals look quite similar. Here, in this image of a one-day post-oviposition African house snake (Boaedon fuliginosus), we see many features that tie all vertebrates together: pharyngeal arches surrounding the mouth and throat (with gill slits between them), muscle segments (called somites) which will eventually contribute to the spine and musculature, and a chambered heart connected to a closed circulatory system to move oxygen and nutrients to tissues. During and after these stages, the novelties specific to a species or lineage begin to develop – here the 5mm long elongated body of the snake develops as a spiral to fit inside the egg.

Runner up: Evolutionary Biology. “Polychaetous worm with engine and wagons” by Fredrik Pleijel. This trainworm (Myrianida pinnigera), which is 35mm from head to tail, lives on the sea floor. Its front end, the trainworm’s engine, is followed by a row of carriages called ‘stolons’ that increase in size towards the worm’s tail end. The carriages are the worm’s swimming sexual organs. When the trainworm is mature, the last carriage in the train lets go and detaches. It swims up the water column to reproduce. The carriages, unlike the engine, all lack a gut and are full of either sperm or eggs. In the water column the well-developed sensory organs seek out another stolon to mate with. After mating the male stolons die. The females survive a short time to shelter the embryos, which are carried in their bellies. Meanwhile, the trainworm on the sea floor continues to produce stolon carriages.