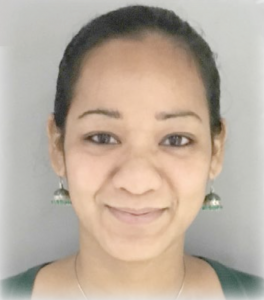 Last year I was lucky enough to travel to California for the first time for the Santa Cruz Developmental Biology meeting – see the meeting report, written with Jordan Ward, here.

At the meeting I was lucky enough to interview three amazing scientists, one of whom was Vilaiwan Fernandes, winner of the SCDB Young Investigator Award for her outstanding research achievements, who has just started her own lab in UCL. (Look out for interviews with Judith Kimble and Cassandra Extavour in future issues of Development.) I sat with Vilaiwan in a noisy and beery evening poster session and chatted about her career so far and plans for her new lab.

When did you first get in to science?

I grew up in Bombay (now Mumbai) in India, and I guess I was interested in science in school because it involved less memorisation than other subjects. I learned to scuba dive, which got me interested in conservation biology and I began volunteering with an organisation that held public education snorkelling camps. I tried to continue that when my family emigrated to Canada, and studied marine biology in my undergraduate. There’s a marine station on the west coast of Vancouver Island called Bamfield Marine Sciences Center, and I spent a lot of time there. Every summer in my undergraduate I would either do a course there or work as a research assistant on some project or other. There’s lots of amazing intertidal life there, particularly invertebrates, and we were lucky enough to explore tiny uninhabited islands and set up quadrats to see what we could find!

How do you go from that into something resembling developmental biology?

I was never interested in cell biology or development, because I liked being outdoors. At the end of my undergraduate I had a summer job but started panicking because I had no plan for once it was up. So I applied to a ton of random things, including an apprenticeship in Friday Harbor Labs in Washington, called ‘Computational Modelling of Biological Networks’. I had also studied math in my undergraduate, and assumed the apprenticeship was about computationally modelling ecological networks, which was wrong: I got there and found it was about gene networks. So that’s sort of how I got pulled in to the field – by accident.

I worked with an amazing postdoc, Kerry Kim, to try to understand the evolutionary benefit of being a haploid or a diploid that reproduces either asexually or sexually. We ran genetic algorithms to evolve populations under these different conditions for several generations. It was cool because we were able to represent haploidy and diploidy (and recombination) in a much more realistic way than other models had at the time. It was a purely computational project but a lot of fun and one I’m still very proud of.

And you then transitioned back again from dry to wet biology?

The apprenticeship was based in the NIGMS Center for Cell Dynamics, which was run by Garry Odell. His wife Victoria Foe and other amazing scientists like Ed Munro and George VonDassow also worked there. Garry was brilliant and encouraged me to try my hand at experiments. He had an engineering background and was really interested in size control and scaling. He convinced me to transplant nuclei between different sized Drosophila species just before cellularisation. The goal was to see whether the foreign nuclei would form cells staying true to the size of their own species or if they would switch to the size of the host species. Unfortunately, we didn’t finish this project as I left to start grad school, but it was the best introduction to experiments!

It sounds quite fiddly as an introduction to experimental work!

It was, but Victoria, who trained me, has amazing hands and she just taught me to be patient. It made me opt for lab work over computational biology in grad school, and I applied to McGill and joined Ehab Abouheif’s lab. Quebec didn’t suit me for a number of reasons and I ended up dropping out of that PhD programme and moving back to the West coast, where I re-enrolled in a grad student in a fly lab – Esther Verheyen’s in Vancouver.

My initial project with Esther was to work on Nemo, a rather promiscuous protein kinase. Thankfully, Esther convinced me to do a screen for morphogenetic furrow progression defects in the eye disc. That’s where we pulled out a kinase called Misshapen, which stood out because it sped up furrow progression in contrast to all our other hits. At that time, Sally Horne-Badovinac’s lab had just published Misshapen’s regulation of integrins in the follicle cells. I met her postdoc Lindsay Lewellyn at a conference, and following that we decided to test the role of integrins in the eye. Lindsay was super cool, and ended up on my paper! I guess the main point of that paper was to link the signalling pathways that affect transcription in the eye with the non-transcriptional, post-translational events, like cytoskeletal rearrangements and changes in adhesion, which are important in the morphogenetic furrow.

And then you go to a New York for your postdoc with Claude Desplan – I guess by that point you’d fallen for eye development?

Not quite – but every time I say I’m not going to do something, I end up doing that thing. I thought wanted to switch models and move away from neurobiology, but then I met Claude at a Gordon Conference and he suggested that I apply to his lab. The atmosphere in his lab was great, and I was lucky to get accepted. Claude is always, always excited about science and I could not have been in a better place.

My project was initially to try to understand how to make individual cell fates in the developing visual system, in particular how to generate cellular diversity in the lamina. When I started working on it we realised we didn’t actually know why neurons differentiate in the particular pattern that they do, and it seemed that this pattern was key to why they adopted different fates. Seeing how well glial cell processes entering the lamina correlated with the front of neuronal differentiation made us suspect glial involvement. You can read about where that story took us in my Science paper from last year.

So the next step was to look for jobs – you’d been a postdoc for a relatively short time, so what made you think about being a PI?

I had a lot of leads that I really wanted to follow up on, but felt that I wouldn’t be able to do all of it myself. I’m very excited to pursue all of them and see where they go. And Claude was very supportive.

When I applied for the Wellcome Trust Henry Dale Fellowships and got selected for an interview, UCL was very good at organising mock interviews – they ended up being more terrifying than the actual interviews! My very first mock interview was a complete disaster, and I cried for several hours afterwards, but I’m told that’s normal and I suppose it did the trick.

What are your plans for the initial years of your lab? Are you going to stick with glia?

Perhaps even more than glial involvement I want to focus more broadly on exogenous cues that affect neurons – the field has been very focused on neurons talking to neurons, and neuroblasts being intrinsically patterned, without really looking too much at exogenous cues. For now, I’m focusing on signals from glia.

In the long-term, one of the larger projects will use single cell sequencing of glia during development, with the goal of identifying secreted and membrane-associated factors that affect neuronal development. In theory, this approach should identify instances like the one we showed in our paper, where glia express insulins to induce lamina neuronal differentiation.

Finally, congratulations on your SCDB Young Investigator Award! How did you feel when you found out you’d won it?

It really was a huge honour to receive the award – I was very surprised and didn’t expect it!

At the very end of my talk I thanked the couple Garry [Odell] and Victoria [Foe] with whom I had started my research career in Washington. Garry died earlier this year, but I know he would have been really proud of me for this. I visited him in hospital before I went to my Henry Dale interview. He was adorable – he was there sick in bed but said ‘We have to practice your interview, get your slides out!’ He and Victoria had a can-do attitude in the lab – looking back at those early days I think I we were crazy to think we could transplant nuclei between species! But at the time, I didn’t think twice as to whether it was possible or hard. Gary was great for that, and was such a strong influence on my life and my science.