With over 200 votes counted, the cover of Development’s Special Issue on Plant Development has won the voter’s favourite cover for 2016! The fruit bat came second, and in joint third the fly nervous system and the fly legs. A fitting variety of model organisms for a great year in developmental biology! 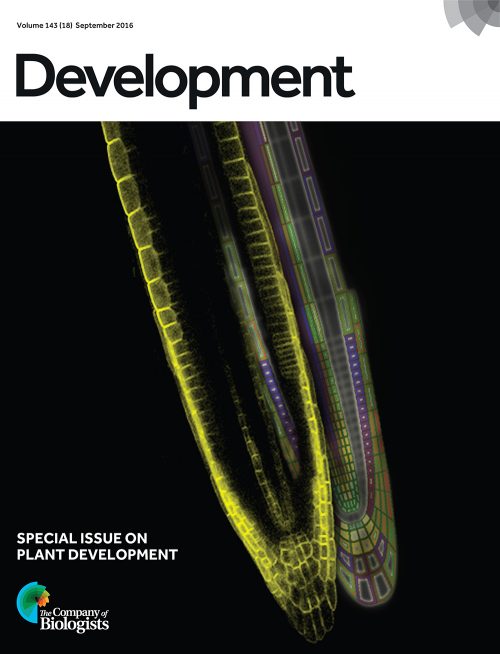 In our in-house competition, the fly nervous system won the Development team’s vote (showing we’re not too far from public opinion!) , but sadly lost out to these beautiful blood cells from our sister journal in the Company of Biologists, The Journal of Cell Science. 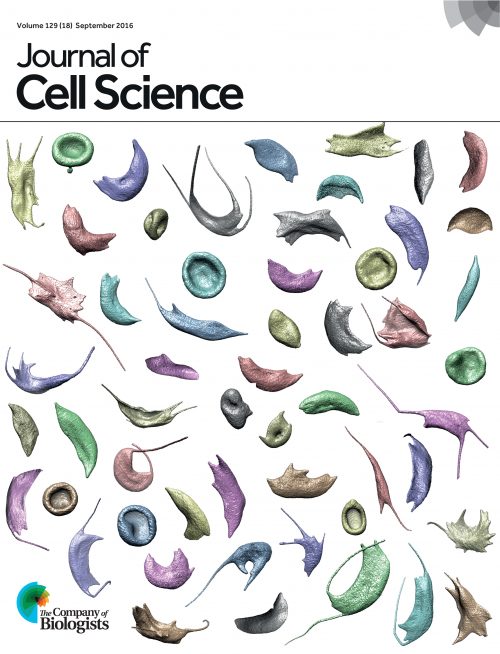 The cover images for the 24 issues of Development in 2016 showcase the breadth and beauty of developmental biology today. Model systems from plants to bats were imaged in various modalities – confocal and electron microscopy, microCT, good old fashioned skeletal preps and darkfield – and we also featured some in silico modelling.

Which one is your favourite? You can vote below the gallery (click to expand), and tell us why in the comments section.

Ovules of Arabidopsis bel1 cna phb phv mutants. The ovulate axis of extant angiosperms does not branch, whereas some fossil gymnosperms show branching ovules. The branched ovulate axis of this mutant might thus bridge the gap in ovule body plan. From Yamada et al., p. 422.

Stage 19 short-tailed fruit bat (Carollia perspicillata). On the left side is an image of the fixed embryo before staining; the right side shows the embryo after Alcian Blue staining for cartilage. This image, taken by Idoia Quintana-Urzainqui, Paola Bertucci, Peter Warth and Chi-Kuo Hu at the 2014 Woods Hole MBL Embryology course, was chosen by readers of the Node.

Actin filaments (red) are enriched at the borders of enveloping layer cells surrounding the blastoderm (nuclei, blue), in the yolk cell cortex, and in a band adjacent to the blastoderm, where they function in cell movements of epiboly and maintain integrity of the blastoderm and yolk cell, a process that is disturbed in zebrafish split top embryos. From Langdon et al., p. 1016.

A skeletal preparation of an embryonic bamboo shark (ventral view) showing the gill arch branchial rays and pectoral fins. The branchial rays of cartilaginous fishes and the paired fins/limbs of jawed vertebrates are patterned by a common Shh-dependent signalling mechanism. From Gillis and Hall, p. 1313.

3D volume-rendered heart of a 75 hpf Tg(kdrl:EGFP) zebrafish larva. Between the atrium and ventricle (right and left side of image, respectively) is the atrioventricular canal, where the emerging valve leaflet is recognisable as a folded structure. Such 3D analyses provide fundamental insights into the cellular rearrangements underlying cardiac valve formation in zebrafish. From Pestel et al., p. 2217

The mosaic of Rhodopsin 5 (blue)- and Rhodopsin 6 (red)-expressing R8 photoreceptors in the retina of Drosophila melanogaster. The insulator protein BEAF-32 is required for Hippo pathway activity to correctly specify R8 subtypes. From Jukam et al., p. 2389

A frontal section of a mouse heart at embryonic day 17.5 showing normal anatomy, which can be disrupted by short-term exposure to hypoxia during gestation. The image was generated using optical projection tomography. From Shi et al., p. 2561.

The hyaloid blood vessel network (red) with associated macrophages (green) isolated from a mouse eye. This, along with the retinal vessel network, was used to provide new insights into the role of apoptosis during angiogenesis and vessel regression. From Watson et al. p. 2973

Spectral karyotyping of a metaphase cerebellar granule neuron progenitor from a P3 mouse with conditional deletion of Atr demonstrates complex chromosomal rearrangements, including fusions and translocations, revealing that ATR plays a crucial role in maintaining genomic integrity during brain development. Each chromosome is labelled in a different colour. From Lang et al., p. 4038.

3D reconstructions of mid-gastrula (left) and mid-neurula (right) Ciona embryos electroporated with transgenes driving H2B:Cherry (red) in the epidermis and YFP-CAAX (green) in the neural plate. Nodal and FGF control the cellular behaviours underlying morphogenesis of the neural tube during Ciona development. From Navarette and Levine, p. 4665.

Links to the papers:

2 thoughts on “Vote for your favourite Development cover, 2016”