Developmental biologist Gabrielle Kardon, Ph.D., never thought that she would be explaining morphogenesis to patient support groups, but that’s where her science led her. And instead of shying away, she has embraced it. Completely.

Kardon’s lab had focused mostly on the limb until her graduate student, Allyson Merrell, urged that they explore the diaphragm, of which little was known about its development. It wasn’t long before their transgenic mice had defects that mimicked a little known but common human birth defect, congenital diaphragmatic hernia (CDH). Their diaphragms had a hole through which the contents of the abdominal cavity creeped into the thoracic cavity, interfering with development of the lungs. Like their human counterparts, many died at birth. 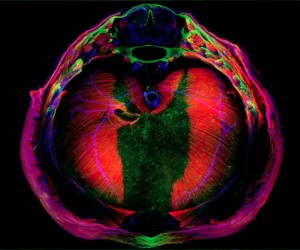 Muscle in red, tendon in green, and nerves in blue

It took five years of hard work before they published a mechanistic cause of the defect in Nature Genetics, the first explanation of its kind for how CDH arises, work that was also featured by Carl Zimmer in the New York Times. During that time Kardon had been lurking on the website for CHERUBS – a CDH support group – to get a better understanding of the disease and what patients went through. Once the results for the paper were solid, she felt it was time the right time to reach out. 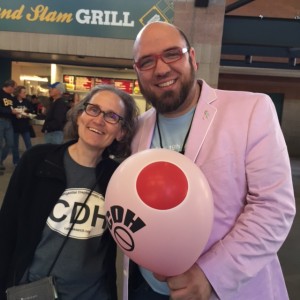 Gabrielle Kardon with a father who had two children die from CDH. The balloon has a hernia!

Since that time, just months ago, her scientific life has taken a 180 degree turn. CDH is now a main focus of the lab, with a goal of figuring out ways to prevent the defect in animal models. An even more radical change, she routinely interacts with the CDH community, who has welcomed her with open arms. She has raised CDH awareness with them at a local baseball game and traveled with them to Washington D.C. to advocate for research funding. 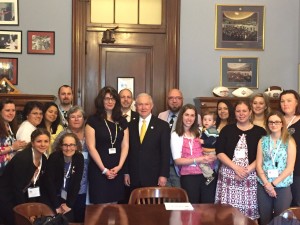 Advocating for research funding with the CDH community in Washington DC

But what has impacted her most is getting to know the patients and their families. From them she has not only gained an appreciation for the brutal realities of living with, or dying of, CDH, but also surprising insights into the biology behind the condition. For example after talking to parents she realized that a subset of children were also born with a cleft palate, a phenotype not mentioned in the literature. The realization gave her additional clues to the causes underlying the birth defect. Perhaps most important, Kardon says the personal connections to the disease gives her work new meaning.

Below are additional links including two to audio interviews with Kardon, one in which she describes her journey into patient advocacy.

Has anyone else had a similar experience with patients? If so, what did you get out of it? And what did they get out of interacting with you? If you haven’t, would you if the opportunity arose?

The thinner, weaker regions of the diaphragm that have connective tissue, but no muscle, herniate in response to pressure from the liver underneath