Trying to meet other young researchers in the Boston area interested in developmental biology can be surprisingly difficult. Despite the high density of scientists in a relatively small area, our day-to-day life exists mostly within our own labs; it’s arguable whether we interact enough with others in our own departments, never mind across departments and institutions.

After hearing about the Young Embryologist Network in the UK, it seemed that the perfect solution was to organize similar meetings this side of the pond. After lots of help from the YEN group in the UK, and kind support from Prof Marc Kirschner and the Department of Systems Biology at Harvard Medical School, on May 14th we had our first meeting, as advertised on the Node recently.

The first talk was due to be given by Dr. Stan Artap, a postdoc at Beth Israel Deaconess Medical Center in Peter Oettgen’s lab, talking about the “mouse heart” part of the meeting. However, in a great gesture that I hope will set the tone for our group going forward, Stan brought along his research assistant, Bryan Marsh, who is about to apply to graduate school in the area of developmental biology, to give the talk instead. Bryan, or our “embryological embryologist”/Very Young Embryologist, gave an excellent talk about the work he and Stan have carried out looking at the roles of the transcription factor ERG in cardiogenesis: early, in regulating BMP signaling during the specification of cardiogenic mesoderm into myocardial progenitors; and later in development, promoting endocardial-to-mesenchymal transition during cardiac cushion formation. 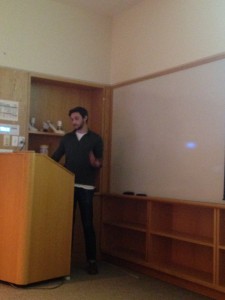 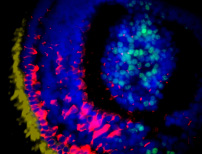 Left, Bryan Marsh presenting; right, an image of the eye by Vaibhav Pai.

The next talk was from Dr. Vaibhav Pai, a postdoc in Mike Levin’s Lab at Tufts University, talking about the role of membrane potentials in tissue specification in embryogenesis. Pai discussed his work in Xenopus manipulating ion flux to cause the formation of ectopic eyes in a Pax6-independent manner in all parts of the tadpole (Pai et al., 2012). He went on to show his recent work in rescuing Notch ICD-induced brain deformations by manipulating ion flux (Pai et al., 2015). His talk led to a very lively discussion, as a talk that demonstrates the role of biophysical forces in completely over-riding conventional gene regulatory network theories is wont to do! 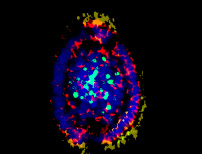 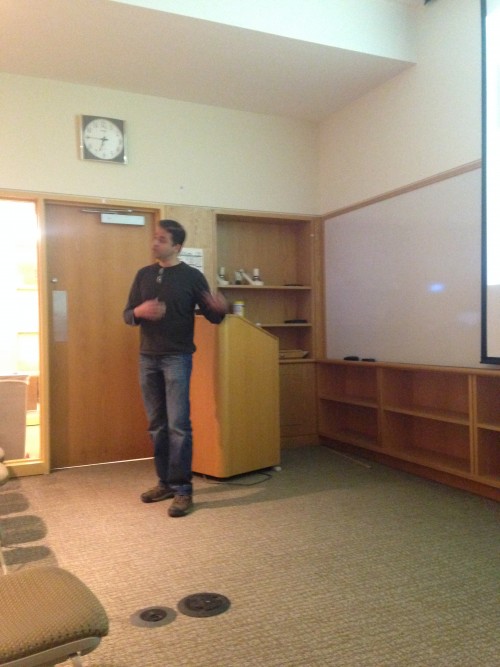 The meeting format was very informal; people were free to grab pizza and soda as they needed, and the “20 minute talk, 10 minute question” format worked very well for the meeting (so well, that some participants suggested they would have enjoyed hearing a third speaker). Surveys were distributed to figure out what worked and what didn’t, and the feedback was very positive; people enjoyed the ability to hear talks from various speakers, and the opportunity to meet with other researchers from other institutions. In particular, everyone seemed very keen to return for the June meeting, which will feature Siyeon Rhee, a graduate student in Kimberley Tremblay’s lab at UMass Amherst, and Sam Morris, a postdoc in George Daley’s lab at Boston Children’s Hospital.

There are still some key challenges in getting the meeting up and running; representation was very Harvard Med School-heavy, and some of the questions going forward are where to hold meetings (in one location, or rotate around a few institutions?) and how to advertise the meeting effectively (if you’re reading this, and are interested, and now others who might be, please check out the website and get in touch/spread the word!) to build up a sustainable regular meeting. However, it was great to see such enthusiasm beyond just having free pizza, and to get together and talk science with other young embryologists.

One thought on “Young Embryologists Meet in Boston”