Hello! I am Annie, a research assistant in the group of Molecular and Developmental Complexity, under the supervision of Dr. Luis Alfredo Cruz-Ramírez. Our group is part of the National Laboratory of Genomics for Biodiversity (LANGEBIO) at Irapuato, Mexico. We are a relatively new group as we only started a year ago. Our research focuses on the molecular networks underlying cell reprogramming events and their influence in regeneration and developmental complexity. We are very interested in deciphering the first signals that trigger cell reprogramming for blastema formation during Ambystoma limb regeneration.

The Axolotl is a salamander species belonging to the family Ambystomatidae and part of the Ambystoma genus. This genus includes 32 species in North America, distributed from southeastern Alaska to the southern boundary of Mexico. Half of the global diversity of the genus Ambystoma (16 species) is endemic to Mexico. The 16 species are distributed along the so-called Transmexican Volcanic Belt (TVB). This region is the most populated in Mexico, and most of the endemic species of Ambystoma found there are threatened by changes to their habitat.

The Axolotl in mexican culture

Within the Ambystoma genus Ambystoma mexicanum, the Axolotl, is the one with the greatest importance in Aztec culture. According to Aztec mythology the Axolotl is one of the representations of the god Xolotl, the monstrous twin brother of Quetzalcoatl. The word Axolotl comes from the Nahuatl word for water (Atl) and for monster (Xolotl). The Axolotl is therefore an aquatic monster, the aquatic representation of one of the most important gods in Aztec culture.

The Axolotl is endemic to Xochimilco, a town that has existed since pre-Hispanic times. This town was declared a site of Cultural Heritage for Humanity by UNESCO due to the series of water canals that house the few remaining Axolotls, since the main lakes and lagoons that made up most of the Valley of Mexico have already disappeared to make way to today’s Mexico City. Due to these drastic changes to its habitat since 1975 that the Axolotl is included in the Appendix II of the Convention on International Trade in Endangered Species of Wild Fauna and Flora (CITES), to regulate its international trade. In Mexico, it was placed under protection by the programmer of Norma Official Mexicana (NOM- 059-ECOL-1994) and has been under special protection since 2001, although this category changed to endangered in 2010. Today, the Axolotl is one of the 51 species of the Priority Conservation Program Priority Species (PROCER). The International Union for Conservation of Nature (IUCN) changed the status of the species from vulnerable to critically endangered in 2006, indicating that this species is under a high risk of extinction.

Ambystoma species as a model for regeneration studies

Salamanders of the genus Ambystoma are the vertebrates with the greatest capacity for cellular and tissue regeneration. The most studied model species is the Axolotl. The great capacity for regeneration and tissue repair displayed by the axolotl has surprised researchers for a long time. The axolotl is therefore the most studied model species in this genus and it has been a study model for over 100 years. Moreover, it is one of the salamanders most easily bred in captivity and for which the most complete and comprehensive genetic, genomic, and transgenic tools have been developed. Previous studies have reported the ability of Axolotls to regenerate retina, tail, legs, spinal cord and some tissues of the heart, after injury or amputation. This makes the Axolotl an important experimental model in the field of regenerative medicine and developmental biology.

In addition to its regenerative capacity the Axolotl is of scientific interest because it retains the gross morphology of larvae as a reproductive adult, a phenomenon known as neoteny or paedomorphosis. In addition to the Axolotl, three more species (A. andersoni, A. taylori, A.dumerilii) are obligated neotenic, while some others are facultative neotenic like A. velasci. All these species are endemic to Mexico. The 16 endemic species are A. mexicanum, A. taylori, A. andersoni, A. dumerilii (obligated neotenic), A. velasci, A. silvense, A. rosaceum, A. ordinarium, A. lermaensis, A. altamirani, A. amblycephalum (facultative neotenic), A. flavipiperatum, A. rivulare, A. bombypellum, A. leorae and A. granulosum (metamorphic), all of them are endangered at some level. 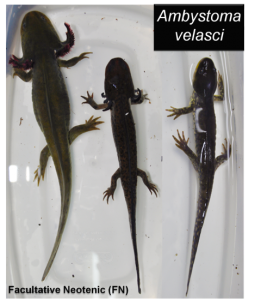 A typical day in our lab

We normally arrive in the lab at 9 a.m. and go directly to our animal facility, to check that everything is well with the Ambystomas. We do physicochemical tests periodically (measurements of temperature, pH, nitrite, ammonia), and fully wash the dirty tanks while in other tanks only a partial replacement of dirty water for clean and fresh water is made. Water quality is essential to the welfare of Ambystomas; they need temperature of 15-18 °C, pH 6.5-8, nitrite levels no higher than 1.6 mg/L, and ammonia and chlorine concentrations of 0 mg/L. We feed them once a day, or twice when they are juvenile, with earthworms and pellets for carnivorous turtles (see video 1- feeding). These animals are carnivores, and therefore must be well fed as otherwise they may start biting and eating the limbs or gills of their neighbors. Cannibalism is something that occurs more frequently in young animals because they need more food. They are very charismatic animals and have a characteristic big smiling mouth. Ambystomas are very quiet and rarely aggressive except when hungry. When you enter the animal facility and they detect you they swim to the surface of the water indicating they are already hungry, and we feed them well to avoid any nutritional stress, illness or cannibalism. 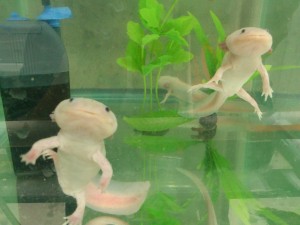 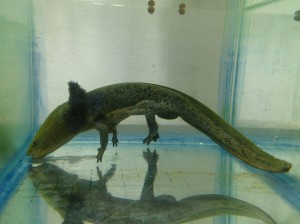 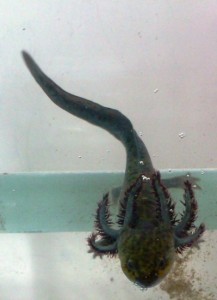 We perform different types of studies with these animals. We are interested in analyzing the molecular circuits that work during regeneration (see video 2), at different time-points. We can amputate a limb and examine the expression pattern of a given transcript or protein by qRT-PCR, in situ hybridization or immunolocalization. We are also interested in the functional characterization of genes and pathways involved in metamorphosis. Since we are not a conservation laboratory, we are less involved in this area,  however we are helping in the preservation of these animals by collaborating in genetic and molecular analyses with a conservation group at the Metropolitan Autonomous University campus in Xochimilco. This group has been working in ex situ and in situ conservation of the Axolotl for the last 15 years by designing and applying diverse strategies to preserve them. In our lab we are willing to generate global transcript profiles by RNA-seq for some of the mexican Ambystoma species, using individuals collected from the wild, this is quite important since most genetic and genomic studies have been done so far using animals that have been many years in captivity in labs, since they were collected from Xochimilco (in the case of the Axolotl) almost certainlythese collections have developed a great level of endogamy since, which generates drastic changes in the genetic pool.

In summary, in a normal day, besides keeping the animals and facilities highly controlled and in good shape, we collect samples or dissect tissues from the animals and go back to the bench to perform any of the several experimental strategies previously described. The animals are rarely sacrificed and dissections are made after anesthesia.

As I mentioned before, it has not been long since we started working with Ambystomas and my experience with breeding has been a bit complicated. We have tried an artificial method using human chorionic gonadotropin hormone (HCG) in order to know the exact time of fertilization, and we got very good response in the female since we were able to recover a good number of ovules by simple massage. Unfortunately, when we tried the same procedure to extract sperm from the male, to avoid animal sacrifice and pull the vas deferens, we were not successful. We are currently, trying natural breeding and we will test if we are able to standardize the collection of zygotes in the first division-stage or preferably in the one cell-stage (to try transgenesis). Currently, all the animals we work with are obtained from a laboratory dedicated to ex situ reproduction and conservation of Axolotls in conditions as close as possible to the wild.

In the medium and long term, we want to study as many Ambystoma species as possible, to determine the molecular circuits that control developmental aspects ruled by cell reprogramming such as regeneration and metamorphosis. To approach functional genetics, one of our major goals is to establish transgenesis successfully, in order to thoroughly study those genes that are part of the circuits that define regeneration and metamorphosis developmental processes. We are also concerned about how endangered several of these species are. To help with this, we are trying to collect all the Ambystoma species endemic to Mexico in collaboration with experts in Axolotl conservation. We aim to generate a living genetic reservoir and design strategies for ex situ reproduction and re-introduction to the wild, being very careful with the genetic pool, avoiding endogamy and securing wild type-like variability.

“There was a time when I thought a great deal about the axolotls. I went to see them in the aquarium at the Jardin des Plantes and stayed for hours watching them, observing their immobility, their faint movements. Now I am an axolotl.”

Tags: A day in the life, axolotl
Categories: Lab Life