Birds in flight were an inspiration for Wright brothers to build aeroplane. Be it how Geckos scurry up walls or sub cellular trafficking of molecules, fundamental biological phenomena are always been a greater source of inspiration for new technological innovations.

Recently, I came across two different articles in Nature and Science published almost during same week describing two technologies inspired by insect vision and flight. When I read Zoology major for my previous degrees, I was exposed to great deal of insect physiology and I was always intrigued by their compound eyes that are formed of thousands of units or lenses (ommatidia) which are helpful to view in large angle and detect fast movements.

A remarkably sophisticated optics in nature is Arthropod vision. Inspired by this biological phenomenon, Song et al., published building of digital camera with a lens that resembles Arthropod compound eye. The authors have constructed 180 tiny lenses on a elestomeric (can change from planar to hemispheric geometry) sheet, something same as the eyes of fire ants and bark beetles. The strategy is used to build apposition eye type camera but the same can be applicable to other different vision types of insects such as superposition eyes. Apparently this technology would enable to generate advanced surveillance devices, tools for miniaturized endoscopy and other demanding applications. 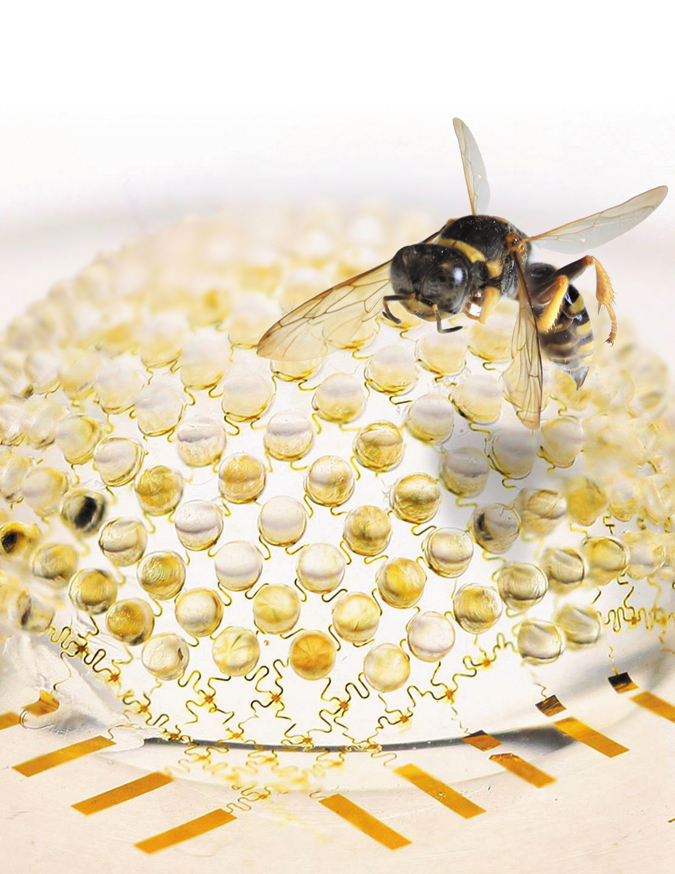 Insects also have evolved to have remarkable flight characteristics and are the only group of invertebrates to have flight ability. Fifteen years of work by Ma et al., have enabled to build a tiny robot flight, inspired by insect aerodynamics. They have developed an 80-milligram at-scale robotic flight with piezoelectric flight muscles overcoming sever miniaturization challenges. They have used Diptera (flies) as model system due to their simple wing anatomy and exemplary aerial agility. The robotic fly they have developed is tethered to a battery and autopilot. But, cordless microrobot flies are not impossible in future with radically new battery technologies. This robofly is a best example of out-of-fiction devices and would be helpful for studying insect-scale, flapping-wing flight mechanics and flight control. See the cool video of the robot in action – here

The bunch of authors from both studies seems to have background in engineering and technology. But, to realize their idea on biomimetics and come up with these impending technologies, they had to refer several research works in the field of Zoology, especially on insect visual mechanisms, physiology and aerodynamics. In recent years researchers starting to appreciate these kind of cross-disciplinary approaches, which are indeed essential for envisaging big picture science.