Our fifth report from the 2017 group of student awardees comes from Jake Cornwall Scoones (student at University of Cambridge), who undertook his studentship with Anna Philpott at the Dept. of Oncology in Cambridge. 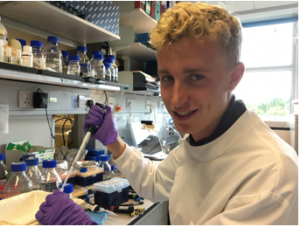 This summer, I had the amazing opportunity of undertaking a Gurdon Summer Studentship, working in Prof. Anna Philpott’s lab, under the guidance of Dr. Roberta Azzarelli at the Cambridge Oncology Department. Having completed first-year Natural Sciences, I was intrigued to learn more about the molecular mechanisms that underpin development. Focused on a potential transdifferentiation pathway in pancreatic cells, the project has been both fascinating and informative, teaching me many invaluable skills, from tissue culture, to growing organoids, to having the patience required for many of the complex procedures involved.
In recent years, many have championed regenerative medicine as a solution to diseases associated with cell loss like diabetes mellitus. This technique, where cells are grown and differentiated to replace dead or diseased cells, has the potential to overcome many of the pitfalls of transplantation, most notably immune rejection. To minimise rejection, inserted cells must display high genomic identity with the recipient. These cells can be derived by one of two methods:1, 2 through a differentiation programme, transitioning embryonic(-like)3 stem cells into the fate desired; or via transdifferentiation, through introducing factors that tweak the cell’s genome and epigenome.

During development, cell-lineages sequentially accrue epigenetic modifications that consign them to their fate, transforming from a totipotent zygote to terminally differentiated cells. Waddington’s visual metaphor, envisaging this sequential differentiation as a ball rolling down a terrain of bifurcating valleys, helps to frame questions in developmental biology.4 Upon transplanting the nucleus of somatic Xenopus cells into enucleated eggs, Gurdon found that the resultant cell was pluripotent, capable of differentiating into all cell types.5 In so doing, Gurdon demonstrated that factors within an egg have the capacity to modify the epigenetic state of a nucleus, implying that the ball can roll back up the valley. In the case of pancreatic transdifferentiation, with sufficient knowledge of this terrain and with the correct molecular intervention, we should able to push the ball into our chosen valley.

Pancreatic development proceeds through two stages: the primary transition (embryonic day 9 (E9) to E12.5); and the secondary transition (E12 to birth).6 The primary transition sees endodermal thickening, followed by the pancreatic progenitor proliferation leading to pancreatic bud formation. Through a process of epithelial stratification and micro-lumen formation, the initial tubular morphology that will later characterise the pancreas begins to emerge. This initial expansion phase is followed by rounds of specification and patterning, forming a bipotent trunk and a multipotent tip. Adult pancreata are comprised of three different cell types, namely acinar, duct and endocrine cells, the former derived from tip progenitors and the latter two from trunk cells.

Endocrine development, part of the secondary transition, is triggered by the transient expression Neurogenin 3 (Ngn3) above a threshold level, and proceeds through delamination from the epithelium and aggregation into Islets of Langerhans. Ngn3+  cells are specified to one of five fates in a temporally regulated manner:7 α-cells produced upon earliest Ngn3-activation synthesising glucagon; followed by β-cells producing insulin; then δ-cells producing somatostatin; then PP-cells producing pancreatic polypeptide; and finally ε-cells producing ghrelin. Previous work from the lab by Azzarelli et al.8 demonstrated Ngn3 is phosphoregulated by proline-directed kinases (e.g. CDKs), regulating the balance between proliferation, (Ngn3 hyper-phosphorylation), and differentiation, (Ngn3 under-phosphorylation). β-cell maturation is promoted by the transcriptional regulator Pdx1, among others, whose expression remains confined to β-cells in the adult pancreas. Working in tandem with Pdx1, MafA transcriptionally regulates genes involved in insulin secretion and biosynthesis and it is thus considered a marker of mature β-cell identity.

Ngn3, crucial in assigning endocrine fate initially, and MafA and Pdx1, important in β-cell maturation, have been previously over-expressed in combination to induce transdifferentiation of acinar cells to β-fate in an in vivo model. These factors were used in our experiment to see if such transdifferentiation is possible in an in vitro model, specifically pancreatic organoids, a form of 3D cell culture grown in matrigel. Upon over-expression of these three factors, it is possible to test for changes in cell fate, by looking at symptomatic traits of β-cells, namely the production of insulin.

Over-expression can be achieved through the infection of organoids with lentiviral vectors carrying genetic loci that upon infection will be inserted into the cells’ nuclear genomes. The activation of these imported genes should be controllable so a transactivator is used which, when bound to the antibiotic doxycycline (Dox), becomes active, binding the promoter of our genes of interest, inducing their transcription. The three factors are necessarily expressed together through their transcription within a single ORF, containing MafA, Pdx, Ngn3 and GFP (a fluorescent marker) sequences, separated by loci encoding the cleavage peptide 2A, meaning upon translation, cleavage ensues resulting in four functional proteins. Hence a GFP signal is sufficient to determine the expression of all three factors, leaving other wavelengths free to test for pancreatic hormones through immunohistochemistry.

Two lentiviral vectors were used to infect organoids, one carrying the transactivator gene Tet3G, and the other carrying the locus of interest, Pdx-MafA-Ngn3-GFP (PMN), or GFP as our control. Viruses were produced by the transfection of HEK cells with several plasmids, each containing genes encoding different viral proteins plus the locus of interest, followed by incubation, viral purification and titration. Organoids were incubated with viruses for a week with Dox and then fixed with PFA. Immunohistochemistry was performed, staining organoids for insulin. Preliminary results are very encouraging and I look forward to seeing how my contribution fits into the larger project as a whole.

This studentship has been an invaluable experience, allowing me to gain an understanding of real-world lab science, a practice venturing into the unknown, far from the rushed experiments for which answers were already known performed as a part of my course. I have developed lab-skills, most notably having the rare opportunity to work with organoids, a relatively novel technology. I urge other students to consider applying for this fantastic opportunity in future years.