Plenary talk given at the School of Biological Sciences symposium on Friday, 12 January 2018 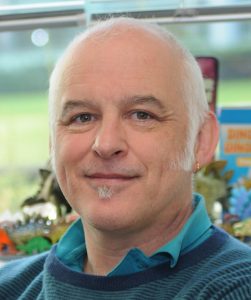 Matthew Cobb is an inspiring advocate and communicator of science, in particular of biology. This is clearly reflected in his books and articles about the history of biology (and beyond), and his various radio programmes reflecting on past and contemporary science topics. Recent highlights are his book “Life’s Greatest Secret: The Race to Crack the Genetic Code” (shortlisted for the 2015 Royal Society Winton Prize for Science Books) as well as his BBC Radio programmes “Editing Life” (a well-balanced analysis of the opportunities and risks of the newly emerging CRISPR gene editing techniques) and ”Sydney Brenner: A Revolutionary Biologist“ (about the life of this outstanding scientist).

As a result of working on two BBC radio programmes and a project on scientific collaboration (supported by a Sydney Brenner Research Scholarship from the Cold Spring Harbor Laboratory), Matthew has been reflecting on what are the magic ingredients that produce great biology. The talk he presented at Manchester’s School of Biological Sciences Symposium on 12 January 2018 (see re-recording of this entire talk here), was an inspiring and enlightening summary of the key ideas extracted from this endeavour.

In his talk, Matthew first gave a definition of “great biology” which he proposes as “influencing our thinking about life, from nucleic acids to ecosystems, in ways that are long-lasting and opening up new perspectives”; he pointed out that these traits are “not necessarily associated with large grant funding, publication in ‘high-ranking’ journals or practical or therapeutic implications”. He then moved on to explain what he thinks the five magic ingredients are that promote great biology, illustrating each point with enlightening examples of scientists and anecdotes from the biology’s past (one of them about amateur scientists!) – always with a view to current practice, and providing inspirational advice for the future. Certainly, I do not want to spoil the watching of Matthew’s talk by giving away the concrete examples, but shall briefly discuss the fundamental ingredients that Matthew highlighted, mixed in with some of my own thoughts.

The first advice is to be early in the game. To be at the forefront of new developments or even being a trend setter requires vision, meaning the ability to recognise today what will be important tomorrow, but also living with the right mind at the right time. Certainly, the chances of being in the early game is helped by keeping an open mind for the bigger picture and unanswered questions, rather than getting lost in detail. And there are measures that can be taken to this end. For example “The encyclopaedia of ignorance – life sciences”, edited by R. Duncan and M. Weston-Smith in 1977/78, was an inspiring attempt to make renowned scientists of the time think aloud about the future of the various life science disciplines; and I could imagine that this was a great catalyser for curious readers to awaken their pioneer spirits. Another important means to foster a culture that honours forward-looking thinking, is to free time for, and take an interest in, true dialogue and discussion. For this, we also need to generate the right environment and opportunities, such as to ensure that all new buildings have informal social spaces where people can meet and discuss. But also, when reviewing manuscripts, we need to be open to new ideas so that they can develop – rather than brush them away with a tunnel view. In a recent case of a fellowship application I experienced, ten lay reviewers gave maximum marks; in contrast, three specialist reviewers rated the application as being mere average, mostly based on technical detail and blind to the concepts and ideas behind that application and its potential to develop great science. It is the latter that we all need to recognise and foster.

The second advice is to think and plan long-term. Key to this strategy is the art of long-term objective setting guided by fundamental questions and their break-down into medium and short-term goals that can be dealt with at a time. Again, this is not made easy in the current science and science funding landscape, but all arguments are in favour of long-term developments. The “skimming-the-cream-and-moving-on” mentality might be good for the careers of individual scientists, but perhaps not so good for the actual science. Similar conclusions are drawn by the article “How should novelty be valued in science?” published by B. A. Cohen in Elife last year. Cohen’s analysis of arguments from the philosophy of science (how reliable knowledge is generated) and from the sociology of science (how science communities work most efficiently) clearly dismantle the excessive demand for novel mechanisms (as opposed to gradual development of concepts) that governs contemporary science funding and publishing policies. This trend has become a significant inhibitor of high quality science, and the alarming increase in reports about non-reproducibility of published results is a logic consequence of these developments, and poses a risk to the future of science.

The third advice is to choose and/or develop the right tools. Apart from the examples Matthew mentioned in his talk, I can mainly speak for the biomedical sciences; my personal experiences lie with Developmental Biology and Drosophila research within, both of which are under threat by the growing emphasis on translational (i.e. clinical) research. Many politicians and funders seem to focus increasingly on the final steps of the discovery pipeline, fixing their gaze on expected short-term returns. They overlook, and often don’t understand, that longer-term basic research (which is typically not performed on humans but on animal model organisms as the more versatile “tools”) generates the creative pool of ideas that will feed the bench-to-bedside pipeline in the future. But even within fundamental research, “tool choice” has shifted away from the use of genetic invertebrate model organisms, such as C. elegans or Drosophila, to the use of mouse models. This development fails to recognise that research concerning evolutionary conserved processes and mechanisms is done far more productively and economically in the smaller model organisms; as Hugo Bellen once stated [LINK]: “You get 10 times more biology for a dollar invested in flies than you get in mice”. I therefore believe that we would see greater biology if grant panels looked more critically at the justifications for the model organisms that are being proposed for projects – and that such a practice would free up funds for a greater variety of science.

The fourth advice is to build good teams. Matthew highlighted three factors. Ideally have at least one person with great vision in your team that has the genius to drive the conceptual ideas behind the work. Be complementary in your expertises. But, most importantly, foster a productive culture of discussion: be prepared to play around with ideas even if they appear mad at first sight; and enjoy and capitalise on friction coming from different opinions and opposing thoughts, so that the best ideas can emerge and be developed into scientific experiments.

The fifth ingredient, least accessible to advice, is luck! We all know this component as a potential maker and breaker of careers. This said, bad luck certainly breaks those who either lack the vision or disregard the above advice. However, the good scientists will be prepared: either by taking the long view that provides flexibility for alternative strategies and approaches, or by using failure as an opportunity to rethink and take new directions – perhaps providing a new chance to be early in the game! As Napoleon supposedly said: “I believe in luck, and the wise man neglects nothing which contributes to his destiny”.

But even if we are eager to follow this advice, the circumstances of the current science landscape might not be in support of great biology. Harmful metrics, counterproductive expectations, bureaucracy, a shift in public opinion, and harmful publishing policies “bully us into bad science” and promote self-focussed communities and mechanisms that inhibit true progress and passion for science. Some examples were given above and many more can be found in other publications (e.g. Lawrence; Cohen; Young; Smaldino; Martínez-Arias; Nerlich). But, as I argued in a recent blog, we must organise ourselves and engage as a community in dialogue with each other, clinicians, policy makers, funders and publishers – all with a view to improving the biology we do. For such dialogue, we need arguments and elevator pitches that are engaging and convincing. To this end, Matthew’s talk is a rich resource of ideas and well thought-out arguments that we all should listen to and take on board.