Pattern formation and regulation emerges from cellular activity determined by specific biophysical and genetic rules. A major challenge for developmental biology, biomedicine, and synthetic bioengineering is this highly indirect (Lobo et al., 2014b) relationship between the rules that govern processes at the lower scales, and the anatomical outcomes observed at the macroscopic scale. It is very hard to predict what a complex, iterative, distributed system such as an embryo or a regenerating animal will do, from knowledge of the low-level rules. It is even harder to infer what manipulation can be applied at the molecular level, to achieve a specific anatomical change in biomedical or synthetic morphology applications. This is known as an “inverse problem” in computer science; for example, it’s very easy to iterate a mathematical function like Z<=Z^2+c and create a beautiful fractal (http://mathworld.wolfram.com/MandelbrotSet.html ), but it’s an intractable task to take an arbitrary pattern and figure out what formula would produce it.

In this post, I describe our recent efforts to address the gulf between the molecular details that come out of bench experiments, and the complex patterns or regulatory behavior that we would like to understand and control. We view this as the beginning of a “bioinformatics of shape” – the creation of computational tools addressing shape, not only sequence or expression, and that assist human scientists in discovering models that explain pattern and complex, stochastic developmental phenotypes. An important component of this “robot scientist” (Sparkes et al., 2010) effort is enabling the inference of models that are generative (algorithmic): they specify every step, quantitatively, without ambiguity or magic, and show exactly what dynamics are sufficient to produce the pattern in question. The field is moving towards these kinds of models (Wittmann et al., 2009; Raspopovic et al., 2014; Uzkudun et al., 2015; Werner et al., 2015), and away from simple “arrow diagram” models, that capture valuable loss-of-function and interaction data, but only reveal the pieces necessary for the process to occur. That is generally insufficient to show why or how the complex patterning proceeds to a specific shape, or enable full control of its outcome toward a different goal state; thus, it is crucial to develop tools for generating and testing fully-specified generative models.

We first tackled the problem of planarian regeneration (Handberg-Thorsager et al., 2008; Lobo et al., 2012). A fragment of these complex bilaterian creatures regenerates all the missing components, no more and no less, in the correct orientation and at the correct locations (Reddien and Sanchez Alvarado, 2004; Gentile et al., 2011). People have been wondering about how this process works for at least 120 years, but despite remarkable molecular advances in stem cell regulation (Reddien et al., 2005; Wagner et al., 2011), there have been no quantitative models that algorithmically explain more than a few different patterning experiments in this very rich body of functional data. We began by creating a formal language (Lobo et al., 2013b) to describe possible experimental manipulations of worms (cuts, grafts, RNAi knockdown, etc.), and a graph representation scheme by which any shape of worm could be encoded (normal, 2-headed, etc.). We then encoded a large number of papers from the planarian literature into a database, which contains the sum total of current knowledge about this model species – a sort of expert system on planarian regeneration, which a human or algorithm can consult when needing to know what outcome results from a given experiment (Lobo et al., 2013a). Next, we created a virtual worm simulator – an in silico platform on which any genetic model of planaria could be run, and manipulated in virtual “experiments”, to see if the predicted outcomes matched the existing results from the database. Models could now be tested, but where to find a model detailed enough to be run on such a simulator? This problem is already so complex that human scientists have a very hard time to simply think of a model whose emergent behavior correctly predicts all the available results. With each new paper published, it becomes harder, not easier, to come up with a model that matches all the data. We thus implemented the final piece: a machine-learning module, that uses evolutionary computation to try to infer a model of gene regulation that behaves just like the real thing, under the published experimental perturbations. The system ran for several days on a supercomputer cluster, and indeed discovered a model that not only explained the existing data but made correct predictions for experiments it had never seen (Lobo and Levin, 2015).

This is the first model of regeneration discovered by an artificial (non-human) intelligence; we and others are testing the model’s predictions and its ability to suggest manipulations that result in never-before-seen phenotypes (as well as extending the platform to limb regeneration in multiple  species (Lobo et al., 2014a)). Remarkably, the model it found was not an incomprehensible hairball (akin to diagrams of “metabolism”) but a small, easy-to-understand network with only two unknowns (which have since been identified from their connections to neighbors in protein interactome databases). The power of this system is that any future papers’ data can be continuously be added to the database, and the inference process re-run, to discover ever better models.  Regardless of the fate of this particular model, we think this platform is a proof-of-concept, highly generalizable system for using artificial intelligence to assist scientists in the most creative aspect of our work: trying to come up with a testable model of what could be going on during complex pattern regulation. 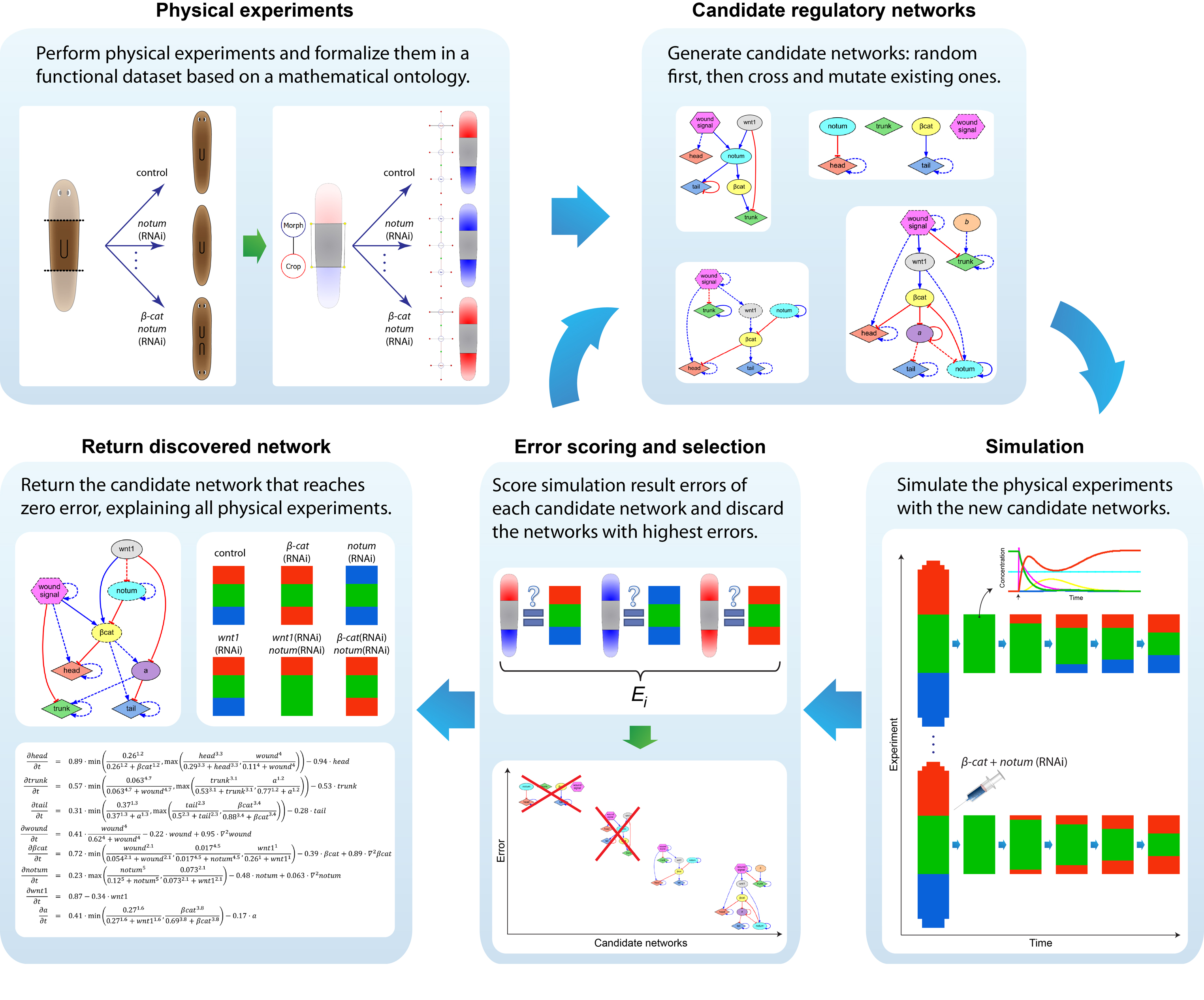 6 thoughts on “Computing the worm: artificial intelligence approaches to planarian regeneration and beyond”