Prominently, cells of an early vertebrate embryo (blastula, a mass of undifferentiated cells) move extensively during gastrulation to generate the three basic layers of the organism: ectoderm at the surface, endoderm presaging the digestive tube, and the mesoderm in between. At the end of the process, the body plan is clearly visible, its main axes established.

This is perhaps most dramatically illustrated in the extremely large embryos of most amniotes (such as in birds and most mammalians, including the human): they consist of thousands or tens of thousands of cells, arranged in an epithelial disc (epiblast). Gastrulation is achieved through a seemingly fixed structure at the midline, the primitive streak (Figure 1 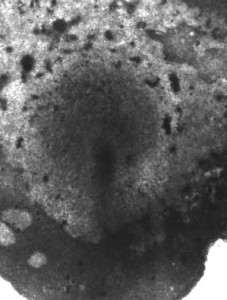 Figure 1: Chick embryo at gastrulation. The primitive streak is the darker stricture along the midline.

Here, cells engage in epithelial-to-mesenchymal transitions (EMTs, similar to carcinoma progression [1]) to leave the epiblast and contribute to the inner layers. In the chick embryo – a good representative of most amniotes -, virtually all cells in the embryonic disc have long been observed to be engaged in large displacements, directed mainly toward the primitive streak ([2, 3], Figure 2). 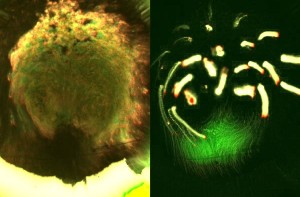 Figure 2. Massive movements across the embryonic epiblast. Left, using transmitted light to observe development prior to streak formation. Right, fluorescent marking of the domain where the primitive streak will form (green) and tracks of other groups of cells (yellow; red indicates the direction of movement).

But how is the primitive streak maintained as a fixed structure in the middle of a field of constantly moving cells? How does it form in the first place? To add to the puzzle, massive cell movements in the epiblast actually start well before gastrulation in the form of counter-rotating whorls, the meeting point of which always correspond to where the primitive streak later forms. Is there a causal relationship?

We have now shown [4] that the primitive streak arises by a chain reaction of EMT events. This is primed by rare EMT events, which occur in the epiblast well before gastrulation. EMTs become highly cooperative through a community effect requiring TGF-b signalling. The gene coding for Nodal, a member of this superfamily, is transcribed early in a small domain on the edge of the blastula, but the activity of the protein is antagonised by signals emanating from an amniote-specific extra-embryonic layer, the hypoblast, which initially lines the epiblast. It is its displacement (and the disinhibition of Nodal activity) that triggers the chain reaction of EMTs and, therefore, the initiation and later the maintenance of the primitive streak.

The Nodal expression domain corresponds to a region in which we previously found cell intercalation to occur, in the plane of the epiblast (green in figure 2, right panel) – this is again regulated by the hypoblast, but positively and via different signals (FGFs, [5]). The intercalation region is initially arranged along the edge of the epiblast and intercalation displaces its cells along one of its radii, before gastrulation. So, one key invention of amniotes is a mechanism to regulate Nodal activity and displace it along the future anterior-posterior axis of the embryo, before it can trigger gastrulation. Interestingly, both intercalation and delaying Nodal-dependent chain reaction of EMTs are regulated by the hypoblast, the characteristic evolutionary acquisition of amniotes.

Two key, local cell behaviours therefore drive primitive streak formation. What about the movements in the rest of the epiblast? We turned to computer simulations and we show that these two components can indeed entrain cells in the entire epithelial sheet to move in the correct pattern, and that the model can also represent the experimental conditions of abrogating or ectopically creating one or two of these components. Local actions can trigger global movements.

A few directions now open, which we now pursue in my new lab in Cambridge. There is now a framework for interpreting experiments at molecular or cellular level and linking them quantitatively to large-scale morphogenesis, and refine both experiments and models in step with each other. Such models hold the key not only for understanding large, regulative embryos (including the human), but also for adequately discerning the common developmental patterns and the true acquisitions / losses during evolution, and the constraints that brought them about. Gastrulation also sets the stage for the development of the nervous system and the elongation of the main body axis; we now hope that we have better tools to continue exploring these key issues.