In spite of the difference between the cell functions responsible for giving rise to a tumour and for the metastasis of this same tumour, studies at IRB Barcelona using the fly Drosophila melanogaster reveal that some genes can drive both phenome 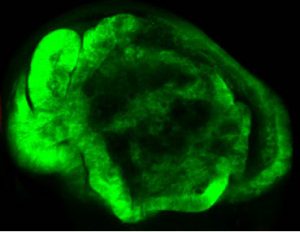 In cancer research, there has been a tendency to differentiate between the genes responsible for tumour development and those that give rise to metastasis and to study these processes separately since the cell functions required for these two mechanisms differ radically. Researchers headed by Jordi Casanova at the Institute for Research in Biomedicine (IRB Barcelona) now demonstrate that genes activated during metastasis are also able to initiate primary tumour development, and they explain the molecular mechanism involved. Made using the fly model Drosophila melanogaster, this finding has been published in PloS Genetics this week.

“The results strengthen the notion that was already being put forward in cancer research,” explains Jordi Casanova, head of the Development and Morphogenesis in Drosophila lab and CSIC professor. He goes on to say “And that is that the same genes can activate tumour growth and metastasis, and therefore some tumours are conferred metastatic capacity from their very outset”.
Two phenomena that share genes

The study is based on the observation that benign human tumours or tumours at stages well before metastasis express some genes associated with this process. “This overlap made us question whether the so-called epithelial-mesenchymal factors—which activate genes associated with cell movement and migration, which are common in embryo development and are also present in metastasis—play a role in tumour initiation,” says Casanova.

In particular, GATA genes are overexpressed in liver metastasis in colon cancer patients, as well as in several human tumours, such as those of the breast, ovary, pancreas and colon. Jordi Casanova’s team examined various genes, among them Serpent (homologue of GATA in Drosophila), and demonstrated that the overexpression of this gene is indeed sufficient to drive tumour growth. In this regard, this gene causes overgrowth of the wing, modifies tissue structure, and activates a series of genetic changes in order to facilitate initial tumour growth.
The fly wing as a model of epithelial tumour

The research was conducted on the fruit fly Drosophila, an established model for studying epithelial tumours. “Once again, studies on Drosophila have contributed to our basic understanding of the behaviour of genes involved in cancer and metastasis, knowledge that will allow cancer researchers to pursue this line further,” says the scientist.

Kyra Campbell, first author of the study, former postdoctoral fellow at IRB Barcelona and currently at the University of Sheffield, in the UK, was supported by Xavier Franch-Marro, at the CSIC’s Institute of Evolutionary Biology.

This work was supported by the Ministry of the Economy and Competitiveness, through ERDFs, and by the Government of Catalonia.