The tumour suppressor p53 plays multiple roles in the prevention of cancer but its developmental functions are less clear. Here (see p. 1827), Eldad Tzahor and colleagues elucidate the key role that p53 plays in craniofacial development. During embryogenesis, cranial neural crest (CNC) cells give rise to the facial bones, cartilage and connective tissues. Neural crest development involves an epithelial-mesenchymal transition (EMT) that converts epithelial cells into migratory mesenchymal cells, which delaminate from the neural tube. Notably, EMT is an early step in tumour progression. The researchers report that craniofacial development is disrupted in p53 knockout mouse embryos. Then, they show that p53 is expressed in CNC progenitors in chick embryos but that its expression decreases as these cells delaminate from the neural tube. Moreover, p53 gain-of-function results in fewer migrating CNC cells, whereas p53 loss-of-function increases the EMT/delamination of CNC cells. These and other findings suggest that p53 coordinates CNC growth and EMT/delamination processes during craniofacial development.

Oiling the wheels of Hippo signalling

The nuage, a perinuclear structure of unknown function, is present in the germline cells of many organisms. Now, on p. 1863, Haifan Lin and colleagues reveal a function for the Drosophila germline nuage. This structure contains Aubergine and Argonaute 3 (AGO3), two of the three PIWI proteins that are essential for germline development. PIWI proteins bind to PIWI-interacting RNAs (piRNAs) and function in transposon silencing. The researchers report that Partner of PIWIs (PAPI), a novel nuage component, is a TUDOR-domain protein that interacts with all three PIWI proteins through symmetrically dimethylated arginines in their N-terminal domains. This interaction is essential for AGO3 recruitment to the nuage and for transposon silencing. Importantly, the AGO3-PAPI complex associates with the P-body component TRAL/ME31B complex in the nuage and transposon activation occurs in tral mutant ovaries. Thus, the interaction in the nuage between the piRNA pathway and mRNA-degrading P-body components is involved in transposon silencing. The researchers suggest, therefore, that the nuage safeguards the germline genome against deleterious retrotransposition.

During cardiac morphogenesis, proepicardium cells envelop the myocardium to form the epicardium. Some epicardial cells subsequently undergo epithelial-to-mesenchymal transformation and invade the myocardium as epicardium-derived cells (EPDCs). This invasion step underlies the formation of the coronary vessels and fibrous matrix of the mature heart but how is it regulated? Michelle Combs, Katherine Yutzey and co-workers now reveal that NFATC1 promotes EPDC invasion into myocardium (see p. 1747). NFATC1, they report, is expressed in EPDCs in mouse and chick embryos and loss of its expression in EPDCs in mice decreases coronary vessel and fibrous matrix invasion into the myocardium. Other experiments in mouse embryos, chicken embryo hearts and isolated proepicardium cells indicate that NFATC1 activation by RANKL in EPDCs promotes expression of the extracellular matrix-degrading enzyme cathepsin K, promoting EPDC invasion into the myocardium. These new insights into heart morphogenesis, the authors suggest, could aid the development of EPDC-based therapies for cardiac diseases.

The timing of cell identity decisions must be closely regulated during brain development. In Drosophila neuroblasts, the sequential expression of several transcription factors, including Hunchback (Hb), controls the temporal generation of diverse neural progeny. Because Hb is necessary and sufficient to specify early-born neurons, its expression has to be downregulated to allow specification of late-born progeny. Now, on p. 1727, Chris Doe and colleagues report that two pipsqueak-domain proteins – Distal antenna (Dan) and Distal antenna-related (Danr) – restrict Hb expression in neuroblasts and limit the numbers of early-born neurons. They show that Dan and Danr function independently of Seven-up (Svp), an orphan nuclear receptor that also regulates Hb expression in neuroblasts. Importantly, Hb misexpression can induce Dan and Svp expression in neuroblasts, which suggests that Hb can limit its own expression through a negative-feedback loop. The researchers conclude that Dan/Danr and Svp act in parallel pathways to limit Hb expression and allow neuroblasts to switch from making early-born to making late-born neurons at the proper time.

Development of the segmented central nerve cords of vertebrates and invertebrates involves the formation of longitudinal axon connections between successive segments. To establish these connections, a pathway must be marked for pioneer axons to follow and then the pioneers’ motility along that pathway must be promoted. But what are the molecular mechanisms that control these processes? On p. 1839, Edward Giniger and co-workers show how Notch signalling directs both processes in the developing Drosophila CNS. They show that canonical Notch signalling in specialised glial cells causes the extrusion of a mesh of fine filopodia by nearby differentiating neurons and shapes this mesh into a carpet that links adjacent segments. Simultaneously, non-canonical Notch signalling in the pioneer growth cones suppresses Abl tyrosine kinase signalling, which stimulates filopodial development and presumably also reduces substratum adhesion, thereby promoting the ability of pioneer axons to follow the carpet across segment borders. Thus, two parallel but separate Notch functions establish the first longitudinal connections in the fly CNS. 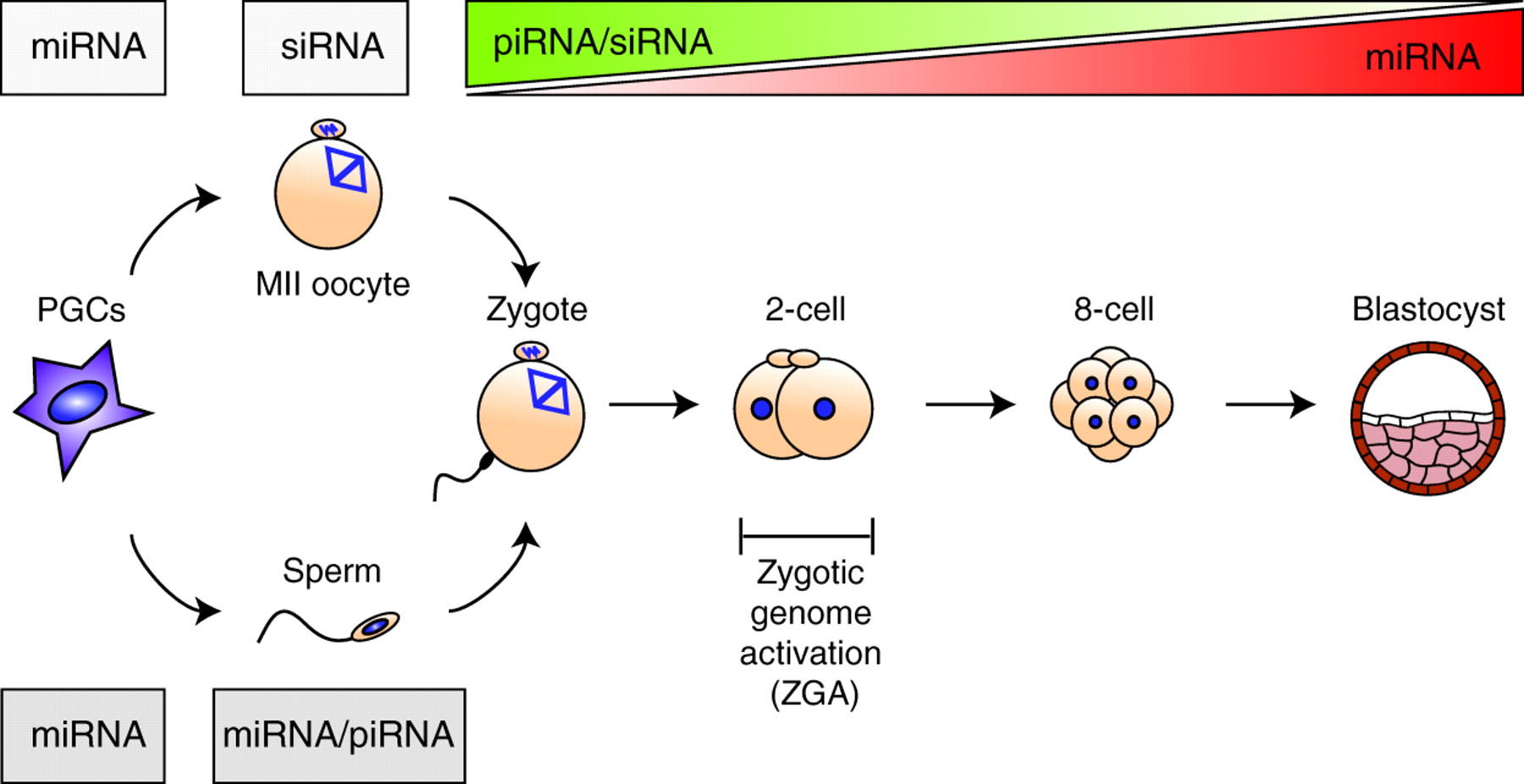 Small non-coding RNAs, such as microRNAs, endo-siRNAs and piRNAs, are expressed throughout mammalian development and, here, Nayoung Suh and Robert Blelloch review emerging roles for these RNAs in the early stages of mammalian development, from gamete maturation through to gastrulation.