The evolutionary history of vertebrate appendages

Have you ever wondered how our hands and feet evolved? This question, which commonly evokes fish crawling from sea to land, has long been a subject of interest, both for palaeontologists and developmental biologists. Appendages are an important part of the tool kit of anatomical innovations that emerged in vertebrates. Limbs, wings and fins certainly contributed to the evolutionary success of the whole group, as they are a fertile substrate for all kinds of ecological adaptations. However, the evolutionary history of vertebrate appendages is complex and far from being completely understood, particularly as we go back into the past to the very origin of the vertebrate lineage. It is believed that our chordate ancestors already had median fin folds. Then, both fin rays and endoskeletal elements appeared in the median fins of the first jawless vertebrates, and were maintained in modern members of this group, such as lampreys and hagfish. Later in evolution, paired appendages emerged around 450 million years ago in the first jawed vertebrates (i.e. stem gnathostomes), and were therefore inherited by modern sharks and teleost fish. Finally, when vertebrates conquered land, paired fins evolved to limbs in tetrapods. We know very little about these different steps, particularly about the early ones (1). So, for example, the evolutionary origin of paired fins is still debated and several theories have been around for a while. Most popular hypotheses include a common origin for gills and paired fins, the emergence of the paired appendages from an ancestral lateral fin fold, and, more recently, the exaptation of their developmental program from the pre-existing median fins in jawless vertebrates.

Neil Shubin (University of Chicago), who is well-known for his participation in the discovery of the Tiktaalik roseae (2), is certainly among the scientists most captivated by the evolutionary history of vertebrate appendages. From his long interest in the topic, and through his scientific interaction with an expert in zebrafish epigenomics, José Luis Gómez-Skarmeta (CABD, Seville), stemmed a project that flourished as more people got involved. Igor Schneider (University of Pará, Brasil), a former member of Shubin’s group interested in understanding the fin to limb transition, also joined the venture. Together they focused their attention on investigating the evolutionary origin of a very famous enhancer, the sonic hedgehog (Shh) limb enhancer, ZRS* (i.e. Zone of polarizing activity Regulatory Sequence). Located one mega-base away from the gene promoter in the mouse genome, this cis-regulatory element has been described as solely responsible for directing Shh expression to the posterior limb bud. Gain-of-function point mutations in the ZRS sequence result in polydactyly in human patients; conversely, loss-of-function mutations in mice result in severe distal truncations of the extremities (3). It was known that the ZRS sequence is deeply conserved in the genome of all jawed vertebrates, so the team conducted classical transgenesis assays in mice and zebrafish to ask if the ZRS regulatory code was also functionally conserved. In parallel, they used 4C-seq to determine the 3D architecture of the locus in mice and fish, and thus to evaluate if there was conservation also at this level. All these experiments were positive, and in March 2015 Igor Schneider visited Seville to coordinate the work and discuss the results. It was during that visit that the possibility and the necessity of completing the study by generating a deletion of the ZRS element in fish were contemplated.

In principle, generating a chromosomal deletion in a well-established model organism wouldn’t seem an impossible task in the CRISPR era. However, in the zebrafish genome, as in all other ostariophysan fish (including ≈7900 teleost species), the shh locus was duplicated after the teleost-specific whole genome duplication event. The presence of the paralogs shha and shhb was in this case experimentally very challenging. After some discussion involving some reference literature (3) and logistics, Igor and José simply walked the 5 metres between José Luis’ office and mine. In contrast to ostariophysans, the second shh paralog was specifically lost in the percomorph lineage during evolution, restoring the genomic complexity to a single gene and a single ZRS element. Percomorpha is the largest group of vertebrates, including almost 16000 living species (i.e. one in every four vertebrates), among them the Japanese rice fish known as medaka (Oryzias latipes). Despite its numerous experimental advantages and the increasing size of the community in the last years, still there are not that many groups working with medaka as a genetic tool outside Japan. Luckily, ours is one of them.

Joaquín Letelier, a Chilean postdoctoral researcher in my laboratory, immediately set up the CRISPR-Cas9 experiments necessary to ablate a 400 bp region of the ZRS in medaka. Before the end of 2015 we had the first clear and yet disappointing results. In contrast to the situation in mouse, the deletion of the enhancer in medaka was not sufficient to eliminate shh expression in the pectoral fin buds. Although reduced to 50%, the gene was still expressed in the fin primordia, and consequently, the bone architecture of the mature fin was only mildly affected in the ZRS mutant fish. At that point, I must confess, I was very close to dropping the project. However, José Luis and Joaquín never surrendered. They argued that the chromosomal deletion was perhaps too narrow (i.e. it was initially designed to delete specifically critical ETS sites), and convinced me to keep on with a second CRISPR-Cas9 round, this time deleting the entire conserved ZRS region of approximately 950 bp. Months later, my fears were confirmed when the second deletion resulted in an almost identical phenotype. Again a disappointing 50% reduction of sonic expression and very mild endoskeletal defects in adult fins. How was this possible? The simplest explanation may come from the existence of alternative enhancers controlling shh expression in the fin buds. Even when a single ZRS enhancer had been described in mice, for many other genes there was growing evidence for the existence of totally or partially redundant enhancers, also known as shadow enhancers (4): a pervasive theme in living organisms that ensures transcriptional robustness. We then used all information on epigenetic marks that we could gather from published resources, as well as from our own data in medaka and zebrafish, to identify promising regions in the shh locus that may act as alternative enhancers. Several elements were tested in transgenesis assays and we were lucky to identify a region located a few kilobases away from ZRS, both in the fish and human genomes, that was indeed able to drive reporter expression in the developing pectoral fins. The expression pattern confined to the posterior region of the bud was very similar if not identical to ZRS. We named this region as shadow ZRS (sZRS). This was by itself a very important observation showing that the simple regulatory logic observed in mice was not the general rule, and that additional enhancers played a role in different vertebrate species.

Hot news from the medaka front

The discovery of the new shadow enhancer kind of satisfied our scientific ambitions, and Igor took over the responsibility of assembling a preliminary draft with all the data. On the 26th of October of 2016, precisely the day after Igor delivered that first draft, Joaquín stormed into my office to show me fascinating pictures taken with his mobile phone a few minutes before. The images (see Figure 1) showed that the adult 950 bp-deleted fish did not have dorsal fins! It was too good to be true. Since we immediately understood the deep evolutionary implications of the finding, Joaquín rushed to confirm the genotype of all the fish without dorsal fins found in the tank. Out of all animals genotyped, all the finless fish were homozygous for the deletion. I could not believe it! At that time José Luis was abroad in Australia for a short sabbatical, and Neil was participating in an Antarctic expedition. Despite the different time zones, everybody replied immediately to a mail with the subject: hot news from the medaka front. 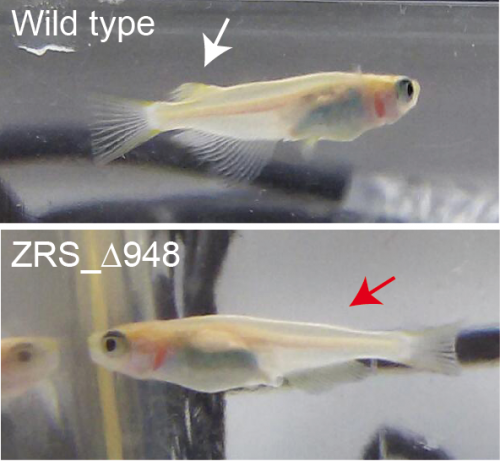 But, why were we all so excited? Well, the finding provided conclusive support for a shared regulatory logic controlling the development of paired (i.e pectoral) and unpaired (i.e. dorsal) appendages. This was indicating a common evolutionary origin for both types of appendages in stem gnathostomes. Since dorsal fins appear first in the fossil records, the discovery pointed to paired fins emergence by the exaptation of a developmental program first established in the median fins. The hypothesis had been formulated years before (5, 6), but this was a direct genetic demonstration entailing the functional conservation of a critical enhancer for more than 450 million years.

In the following months everybody did their best to complete the detailed analysis of the mutant phenotype and the ZRS expression in the different fins. In March 2017 we were ready to submit the paper, all believing the data deserved the best visibility. Happily, Tiago Faial, a senior editor in Nature Genetics, also saw the potential of the work and decided to send it for review. The review process was long but certainly improved substantially the quality of the paper. Although the reviewers found the work interesting, they requested us to delete also the shadow enhancer sZRS. They reasoned that if both ZRS and sZRS control shh expression in the pectoral fin bud, as our experiments suggested, their simultaneous deletion should result in a stronger phenotype. Again, Joaquín took the control and generated, in a record time, a larger deletion of 3.4 Kb encompassing both enhancers. There are many reasons for which such experiment would not yield the expected results. Among other things, additional unidentified enhancers may play a redundant role in paired fins. As a “defensive” experiment, we started another round of transgenics, but no additional fin enhancers were found. Then, to my absolute relief and delight, the results of the larger deletion came out. In the absence of ZRS and sZRS, shh failed to be expressed in the developing pectoral and pelvic fins, thus causing a very severe truncation of these extremities. Without paired and dorsal fins, the 3.4 Kb mutant larvae were able to swim quite decently using the remaining anal and tail fins. To our surprise, some of them managed to reach adulthood (See Figure 2) and even reproduced (See Video 1). This was the story behind this venture, or at least the way I witnessed it. The rest, either you can read it in the paper, or belongs to every participant’s personal experience. 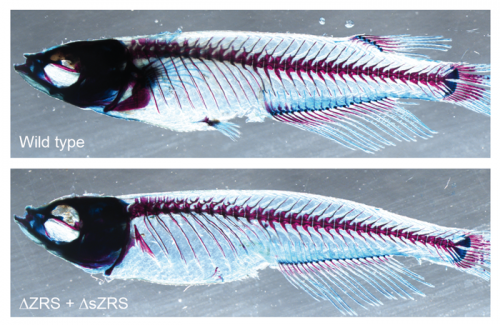 I could not finish without mentioning the fantastic work that everybody did over the last years to push this story forward. Elisa de la Calle-Mustienes, Joyce Pieretti, and Silvia Naranjo performed a terrific job in the transgenesis and genomics front. Tetsuya Nakamura and Juan Pascual-Anaya helped a lot with the µCT and lamprey in situ experiments, respectively. And finally, Nacho Maeso, who was at the heart and soul of all scientific discussions. Without them, and the humble medaka fish, this work would have never been possible.