2015 marks the twentieth year since developmental biologists Edward B. Lewis, Christiane Nüsslein-Volhard and Eric F. Wieschaus won the Nobel Prize for their discoveries on the genetic control of early embryonic development (Figure 1). This anniversary is a good time for us to revisit their groundbreaking discoveries and consider the impact on developmental biology. Using the fruit fly Drosophila melanogaster as their experimental system, the three scientists discovered profound principles governing the formation of body segments, and the formation of organs in individual segments. In subsequent years, the very same mechanisms, involving similar genes and molecules, have been shown to operate in early development throughout the animal kingdom, and thus their pioneering work in the fruit fly might one day help us understand human development. 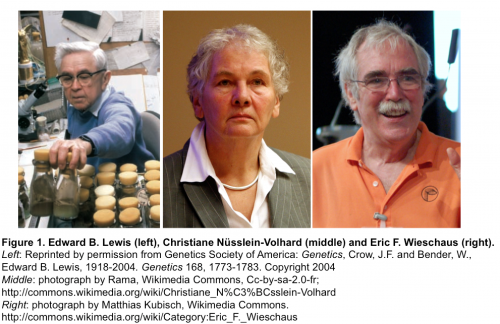 Edward B. Lewis’s research and the four-winged fly

Lewis pioneered fine-structure genetic mapping in Drosophila. Using X-ray radiation or ethyl methanesulfonate (EMS, an alkylating agent that causes genetic mutations in the fruit fly), he recovered various mutants that displayed homeotic transformations—one organ transformed into another. From the late 1940s to the early 1950s, Lewis focused increasingly on a cluster of genes, which he named the bithorax complex (BX-C). Mutations in this gene cluster led to segmental transformations. The embodiment of this research is the famous four-winged fly, in which the third thoracic segment is transformed into the second thoracic segment, resulting in flies where the halteres (the balance organs of a fly) are converted into an extra pair of wings (Figure 2). By mapping the mutations that gave rise to this striking phenotype to BX-C, Lewis demonstrated that simple genetic mutations could cause dramatic changes in the body plan. This concept motivated a generation of geneticists, including Nüsslein-Volhard and Wieschaus, to search for additional genes underlying embryonic development and patterning. 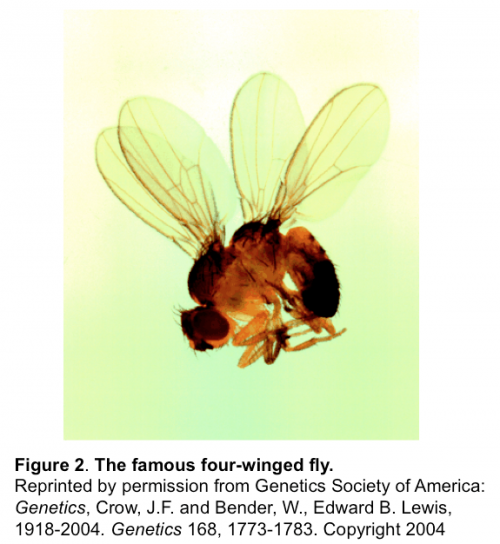 Lewis also discovered the colinearity principle for the Hox cluster of homeotic genes. He found that genes in this cluster are linearly arranged on the chromosome, and their physical order parallels the time of expression during development and corresponds to the body segments they control (Figure 3). An even greater surprise came later, when Hox genes were found to be among the most evolutionarily conserved gene families, and the principle of colinearity holds true for almost all living animals, including vertebrates. These findings revolutionized our understanding of how animals and their organs have evolved, and rooted the emergence of a new discipline in molecular genetics: evolutionary developmental biology, or evo-devo. 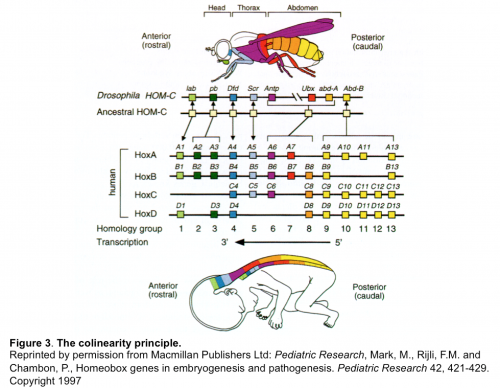 Inspired by the early studies of Lewis, Nüsslein-Volhard and Wieschaus carried out a series of large-scale genetic screens between 1978 and 1981 at the European Molecular Biology Laboratory (EMBL) in Heidelberg, searching for genes that altered the segmentation pattern of Drosophila embryos–as assayed by the morphology of the cuticle. After analyzing some 40,000 flies, they found fifteen such genes. These genes can be categorized into three classes based on their effects on segmentation (Figure 4): 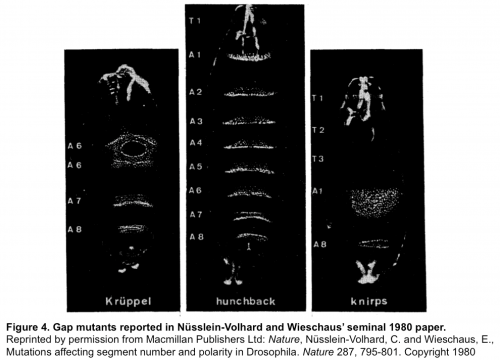 2, “pair rule genes,” which establish pairs of segments. Mutations in pair rule genes affect every other body segment. For example, loss of even-skipped causes embryos to have only odd numbered segments.

3, “segment polarity genes,” which establish the anterior-posterior axis of each segment.

Nüsslein-Volhard and Wieschaus’ work provided new insights into the genetic mechanism underlying the step-wise development of Drosophila embryos. More importantly, it showed that genes controlling particular aspects of development could be systematically identified by virtue of their mutant phenotype. This groundbreaking work laid the foundation for many other genetic screens to identify genes that control the body plan of flies, and for analyses of how these genes operate together to orchestrate the developmental program of Drosophila as well as vertebrates—which has been a central focus of developmental biology ever since.

Almost four decades have passed since Lewis, Nüsslein-Volhard and Wieschaus published their landmark studies in Drosophila, yet the influence of their findings on developmental biology is profound and long lasting. Through their elegant experiments, they demonstrated that the intricate and seemingly hopelessly complex process of development could be dissected using a good model system together with a carefully designed experimental strategy. Insights gained from studying the fruit fly have paved the way to understanding similar developmental processes in other organisms, including vertebrates, which, albeit separated from the fruit fly across vast evolutionary distances, obey similar rules and are controlled by similar gene networks. This has deep implications for basic science as well as medicine, as mentioned in the Nobel press release in 1995, the breakthrough achieved by the three scientists will one day “help explain congenital malformations in man.”

An interview with Nüsslein-Volhard and Wieschaus about their research.

A talk by Wieschaus explaining the design and execution of their experiments.

The Nobel Prize in Physiology or Medicine 1995 – Press Release. Nobelprize.org.